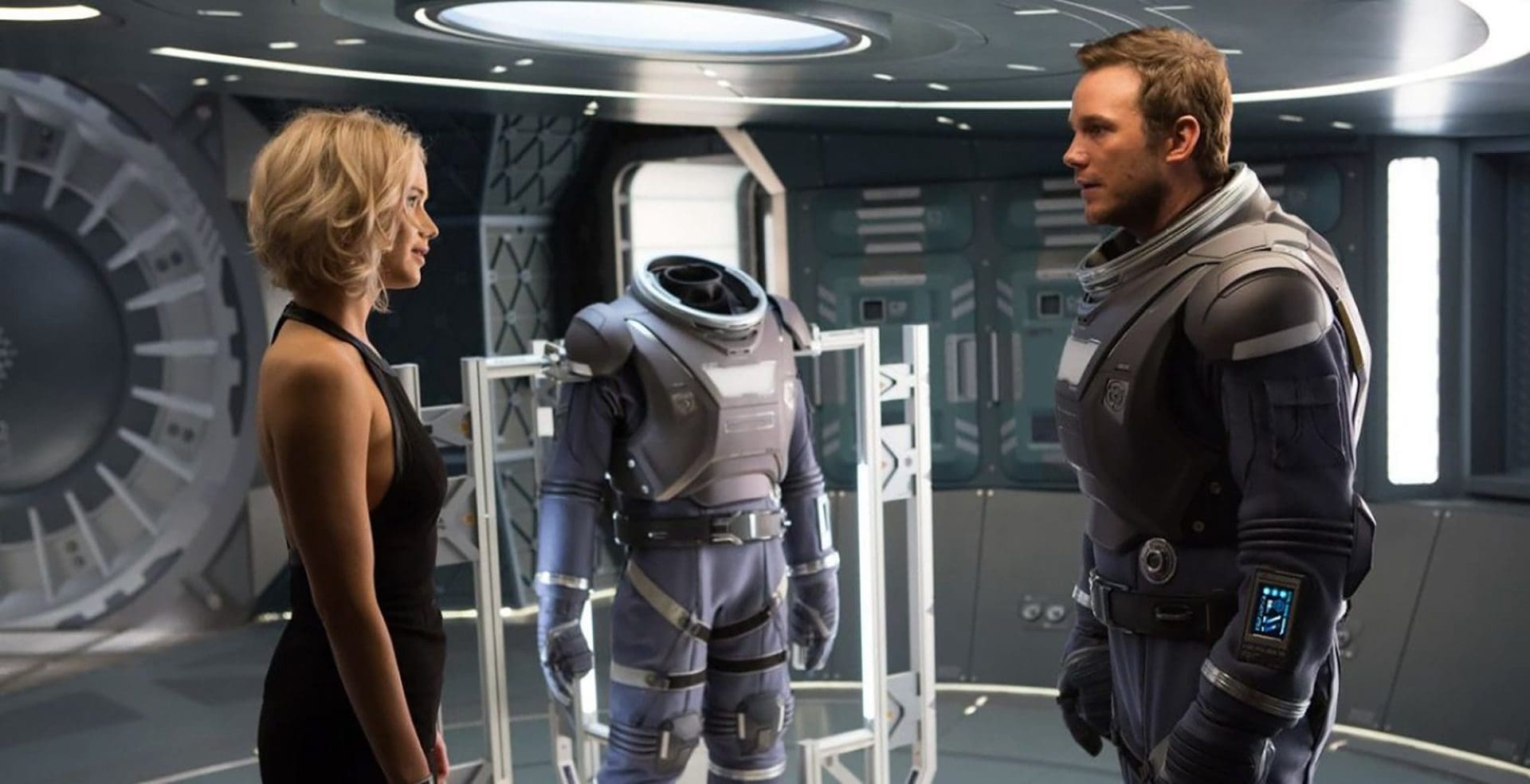 Science fiction is a unique genre.  Much like fantasy it places characters in a world that is imaginative and exciting, but science fiction adds an element of reality to its storytelling.  Whether it’s with theoretical technology or alternate dimensions in time and space, as an audience we are connected to both our main characters and also the idea that we could find ourselves in a similar environment or situation.  All it would take is one or more breakthroughs or political decisions to transpire before a cascade of theoretical possibilities suddenly becomes tangible.  Of course, these elements of science fiction are merely used to enhance the plot.  It allows our characters to have a familiar, yet original back story to engage the audience.  Any back story can be creative, but science fiction allows us to picture those ever approaching what if’s and wonder how we might respond if that scenario were presented to us.

In Passengers, directed by Morten Tyldum, Jim Preston (Chris Pratt) is a traveler aboard a deep space vessel in suspended animation.  He and thousands more are heading to a new planet that offers jobs and hopefully a better life.  When a system malfunction causes Jim’s stasis pod to wake him up, he discovers that he still has 90 years before the ship reaches its destination.  With the entire ship and its crew asleep, Jim must find a way to deal with this life-altering mishap.  His only companion is an android bartender named Arthur (Michael Sheen).  It isn’t long before he decides to make the unfortunate decision to wake up a woman named Aurora (Jennifer Lawrence).  As our two wandering shipmates find ways to occupy their time, it isn’t long before the bright side of things begins to turn dark.

The premise for Passengers is perhaps the best part of this film.  A man and a woman isolated in the vastness of space, but given untold amounts of resources.  They are surrounded by thousands of souls who may never meet them.  They also try to do everything in their power to maintain their mental well-being, relying on dangerous coping devices that offer only a fleeting reprieve from the descent into madness.  If you took that premise and worked out a decent script, you could make a compelling story in any genre.  Yet where the film decides to go instead is an action adventure with some romantic clichés.  It’s not a bad thing to have action and adventure in your science fiction, but it needs to be built on a strong script and the dialogue between Aurora and Jim is just painful.

The visual effects are stunning and enjoyable.  The interior of the ship is practically an homage to the one in Wall-E.  A feast of amenities at your fingertips.  It’s interesting seeing how the machines operate and especially how the gentleman bartender Arthur interacts with Jim and Aurora.  The way the ship moves through space is also fascinating.  There is a brief amount of time dedicated to explaining some of it, which only really matters as the film is wrapping up.

I wanted to connect more with the characters, but there just wasn’t anything particularly incredible about them.  Their entire dialogue could be summed up by two people going on a first date, having a fight, and making up.  It’s that superficial.  They seemed to have back stories worth exploring, but it never enhances the story.  If anything the second half of this movie negates the emotional journey these two take together.  Their behavior goes from having dimension and intuition to carrying on several hollow scenes that were written so poorly they could have come from a made-for-TV movie.  Although television has improved greatly in the last several years so I may be giving it too much credit.

Even though I was disappointed with the outcome of this film, I think Passengers has some interesting visual elements that give it a good science fiction environment.  I suppose Michael Sheen would be the one highlight for me and he’s in only a few scenes.  There is nothing wrong with fun action and adventure surrounded by a compelling romance, but Passengers forgot to be compelling and thought its visuals, and known actors, would carry it along.  It also feels like there might have been more to this film that ended up getting cut; because you get the sense you just watched the first and last episode of a tv show.  Those episodes in between are sadly missed.  I recommend you watch this as a rental on a quiet, rainy day when you’re too lazy to clean.  You’re already wasting time so why not enjoy this.  Actually I much rather you watch Black Mirror.  It also has stories of exciting technology, but with better dialogue and moments that engage you mentally and psychologically.  Also, check out Gravity.

Synopsis: A spacecraft traveling to a distant colony planet and transporting thousands of people has a malfunction in its sleep chambers. As a result, two passengers are awakened 90 years early.

Knives Out | A Very Sharp Whodunit