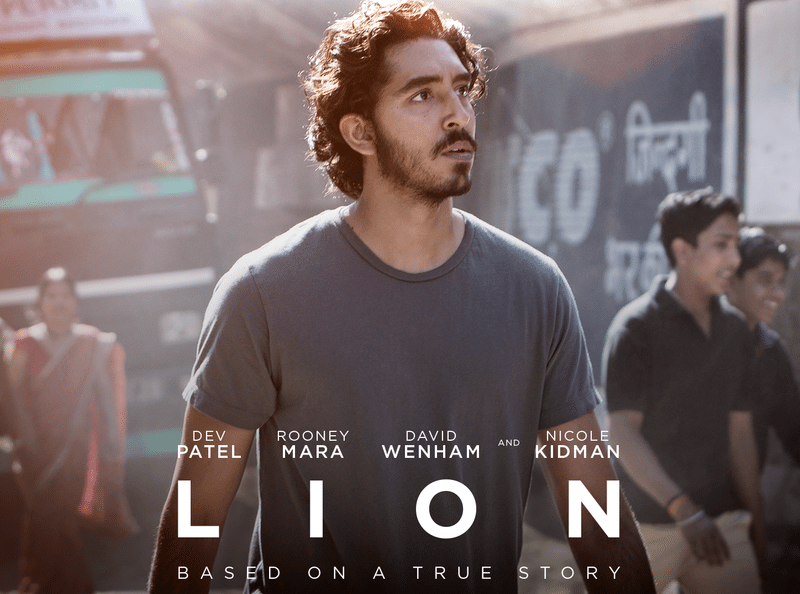 Most of us have, at one point or another, traveled back to someplace from our childhoods.  A place full of nostalgia, playgrounds remembered, footsteps retraced, sights, sounds and smells taking us back to those days where our routines were less mundane and more alive with living in each moment.  But what would happen if we were pulled away from those times of family and growing up?  What if our new reality became something else, a new beginning, a new norm, and that was one day replaced by a memory that we had forgotten was even there in the first place?

Lion is the true story of young Saroo (Sunny Pawar), a 5-year-old boy from the city of Khandwa in India, he gets trapped on a train and is shuttled almost 1500 km to Calcutta, where he spends months living on the streets before being placed into an orphanage and adopted by an Australian couple, Sue and John Brierly (Nicole Kidman and David Wenham respectively) who bring him to their home in Tasmania to raise.  Twenty years later, adult Saroo (Dev Patel) goes to Melbourne to study and meets up with other people from his native land and begins to remember his life in India, becoming obsessed with finding his home and his original family, the obsession drives a wedge between himself, his lover, Lucy (Rooney Mara), and his adoptive family.

The film is beautifully shot, and the locations and cinematography and impressive.  Panwar does a superb job as the young Saroo, charming the viewer and drawing you into the film.  The roles are beautifully acted all around, and the viewer is lead from heartbreak to joy and back several times during the course of the film, with some side trips into mania and madness.

That same attachment to the characters is what makes the problematic pieces of the film that much more so.  We spend a lot of time becoming invested in young Saroo, and the interest in his well being is carefully built.  There are times when things are happening, but the audience isn’t told why. Children are being snatched up by adults while sleeping in a train station, for example. These work from the perspective of a 5-year-old boy suddenly stranded in a country where he does not even speak the language.  It feels as frenetic and uncertain as the events must have felt as they were happening to Saroo.

We then find Saroo in an orphanage with thousands of other children, and without any reasoning, he is chosen as one of a handful to receive special tutelage in order to be adopted to English speaking families.  Again, since this comes from the memories of a 5-year-old boy, there are sure to be holes, but some exposition to explain them would have been appreciated.  More jarring is the jump to Saroo when he’s 20 years older, and we are finding that there have been family problems with another boy the Brierlys adopted after him.  There is enough information given to piece together the family dynamics, but there are details that would have helped to make the viewer’s connection to the characters stronger.  When Saroo meets Lucy in the beginning of his studies in Melbourne, there seems to be a spark, and in the next scene they are living together.  Or maybe they were already dating when they go to the party, that seems to be after the walk where they flirt with each other but haven’t built a relationship yet.

These little-dropped snippets of the timeline are enough to cause a niggling bother in the brain, but the acting and the rest of the story are compelling enough for them to not take the viewer out of the experience completely.  As Saroo becomes more and more obsessed with his search for the needle of his small hometown in the haystack that is all the possible stops on the rail line in India, he becomes a changed man.  Patel takes us on a well-portrayed slide from an intelligent man, who seems to have everything going his way, to a man who has lucid dreams of a former life and sees his past family in his present whereabouts.  By the time he finds his birthplace via Google Earth, he has lost contact with his lover, his family, and the man that he was.

It should not be much of a surprise that Saroo travels back to his birthplace and finds his family.  There are tears all around, both on-screen and among the audience, including yours truly.  It is one of the saddest happy endings that I have ever seen, and the connections with the viewer that the actors have spent the entire film building up are very evident in the emotional feel of the final scenes of the movie.  While there is no “after credits” scene, there are many informational tidbits if one stays and reads the titles.  I made notes for finding further information, and I ordered the book on Amazon.

Lion film is well worth the viewing, despite the expositional omittances, and is likely to be nominated during the upcoming awards season.  If you go see it, take more tissues than you think you need, and see it with someone who you don’t mind being a sniveling, emotional mess in front of.

Synopsis: A five-year-old boy from India gets lost on the streets of Calcutta, thousands of miles from home. He survives many challenges before being adopted by a couple in Australia; 25 years later, he sets out to find his lost family.

KEEPING UP WITH THE JONESES | Movie Review