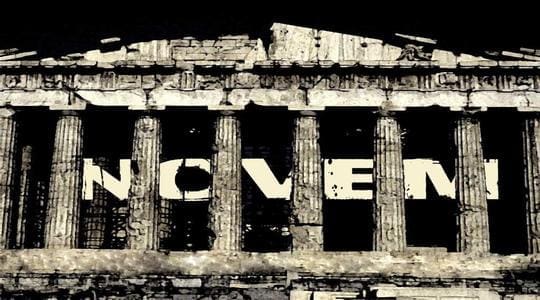 There is nothing more that I like about my comic books than a good scare. Horror in comic books is hard to achieve and very rarely executed properly.

That’s not the case for artist Joshua Green and writer Tyler Brumfield‘s “Novem.”

“Novem” is very simply put as “A horrific tale of beauty…” and it’s just that indeed. In issue #1, We as readers are thrown into a dark forest with a man named Deer who has no clue who or where he is. Interesting characters are met, a fantastic plot is introduced and a major cliff hanger will leave you hungry for more.

If you’re into horror comics, or comic books in general, give issue #1 a shot. It’ll send chills down your spine, I promise.

Below, you can check out the exclusive preview for “Novem” #2. I also got to chat with the creators of “Novem,” which you can read after the jump! Enjoy!

Geek News Network: Gentlemen, thank you for taking the time out of your busy schedule to talk to us. First and foremost, for someone who has not read “Novem,” describe “Novem” for them…

Tyler Brumfield: I get asked this a lot and it never gets easier to describe it! First and foremost it’s a psychological horror story about a man named Deer lost in a world with no memory or identity. As he roams the unfamiliar land looking for answer he starts encountering mysterious and terrifying women calling themselves “the 9 muses.” Some want to help, some want to kill, and some have other agendas. A vicious Queen rules over all of them and Deer is dropped on his ass to survive it all.

Anyone familiar with Silent Hill, Greek mythology, and some of the darker aspects of Alice in Wonderland should find something to enjoy here.

GNN: Let’s go back in time and tell us how you two first met and how “Novem” came into the picture?

Tyler: I actually just kind of stumbled on to this. Comics were never really my intent. I pitched my story to Evil Robo Productions (ERP) at a midnight release they did and they seemed to like it quite a bit. A few months later I was introduced to Joshua and his art style was pretty similar to what the story called for so from there, we just started working.

Joshua: As Tyler mentioned we were brought together to bring this story to fruition. It’s not very often a group such as ERP takes a risk not only on individuals they don’t know, but also individuals who are still finding themselves artistically. We were and still are both very fortunate in not only the opportunities we’ve been given, but also the individuals we have met through all of this.

GNN: Once you had the idea of “Novem” together, you went to Evil Robo Productions, LLC and pitched it to them. Describe that process and how long it took to get “Novem” on its feet…

Tyler: Well, Novem was simmering in my head for about six months before the pitch. I had a lot of the structure, ideas, and plot points hammered out, but it was by no means a complete story or idea when I pitched it. They all seemed to like it in spite of that and with it having such deep layers on top of the unique themes involved, they brought me on board. It was also a good opportunity for them to branch away from anthologies and put together a full book which has worked well with us. Joshua liked the idea and the story so from there I sketched early preliminary character designs and wrote a decent chunk of the story. Joshua started interpreting it and hashing out the transition from book to comic.

GNN: Joshua, regarding your artwork, I definitely like the tone you are going for. Describe the art process and any challenges you faced along the way…

Joshua: As I had mentioned previously, it’s amazing ERP took such a risk on us; especially me. This comic is my second venture in the medium, and it’s my first ever attempt at a semi regular 26 page comic. From issue to issue I’m getting progressively better and better at the narrative and pacing of the art and story. Being that this is independently published, Tyler and I work closely together to make sure the art is on par with what the story is trying to communicate.

As Tyler had stated, he had all of this planned out in broad strokes, and with my involvement started fleshing everything out. Now there are a lot things that work for a novel, which is how Novem was originally written, however there are a lot of things that would not work as a comic book. With those things in mind we were able to straighten out what we could use and what wouldn’t work. What’s really awesome about all of this is that once it’s done, Tyler has a full novel already written and ready to be published.

GNN: Tyler, I am highly enjoying your story thus far and can’t wait for issues two and three, but in the letters page you described facing difficulties in lettering and “placing” it for printing. Describe what you learned from issue #1 and what you did different for issues #2 and #3…

Tyler: Well, I’m a writer. I generally just write and create. It was a completely different process from traditional book into comic. I wanted to letter it to make sure the dialogue and story stay at the pace and true to my original intent. However I didn’t know HOW to actually utilize Adobe Illustrator and Photoshop to size, letter, or do any of that. Issue #2 has been easier but I still get held up on various aspects of the process and luckily, I have some support from Eric Schock and Mariah Wall. It’s been getting easier and I get faster and learn a few more tricks each time.

GNN: Joshua, congratulations on your recent acceptance to The Joe Kubert School of Cartoon and Graphic Art. If you could describe the application process and what are you most excited about?

Josuha: I appreciate it. As far as applying goes it was pretty simple and I would definitely recommend and all aspiring artists look into it. The school looks at anywhere from 15 to 25 pieces of artwork that you submit, and based off of that as well as how you conduct yourself during two interviews, they decide whether you’re accepted or not. It takes a couple of weeks for them to get back to you as to whether or not you’ve been accepted, which was the only real nerve racking part. The east coast is going to be a completely new experience, and the school is going to kick my ass but I’m excited for when they’re done and I’m a better artist for it.

GNN: Tyler, on top of writing “Novem,” you also write poetry, and your poetry recently got accepted for the SandScript Arts and Literarture Magazine, which I also congratulate you on. Describe what you are most excited about…

Tyler: Yes, it did! Thanks. Between working on Novem, I am actually writing it as a traditional book which will see the light of day at some point but mainly I have been working on the poetry, as you mentioned. I’d like to have a book of poetry published or on its way to being so by the end of the year. I’m just excited to be getting positive recognition for the art I create. It’s refreshing to see the poetry thing come to life because in the comic industry you can self-publish and promote quite a bit on your own, doing poetry contests and submissions are a bit different and editors or people you’ve never met thumb through it and pick it without your presence.

GNN: Ha ha, Gentlemen, now I hear you’re both fans of the “Alien” franchise, and I just wanted to know where you guys stand on “Prometheus”?

Joshua: Don’t get us started.

Tyler: Ha ha, oh man. This movie gets us talking. I actually enjoy ‘Prometheus’ more as a stand-alone film and not as an ‘Alien’ prequel. Prometheus is this generations first real sci-fi epic and though it was leaking quite a bit from the various and obvious holes in the story, it certainly delivered on the ‘epic’. When you factor in ‘Alien’ and the franchise, or what Fox and the writers did (or didn’t do) for ‘Prometheus’ I just get upset and frustrated.

Joshua: The whole ‘Alien’ franchise is something very dear to Tyler and I, with ‘Aliens’ being my absolute favorite live-action film. I’d say we probably watch that (‘Aliens’) at least once a week. ‘Prometheus’ did what a lot of sequels/prequels try to and that’s make something that stands on its own and still nods at what came before. I love the fact that it wasn’t a direct prequel because that’s not what I’ve been waiting for. Now with there being a lot I loved, the lack of suspense in ‘Prometheus’ that the original had kind of bummed me out.

GNN: Gentlemen, issues #2 and #3 of “Novem” come out May 8 and May 29, respectively. Where and when can comic fans buy these issues? Also, will they be available digitally?

Tyler: Issue #2 can be purchased early at Drawn to Comic’s Free Comic Book Day event on May 4th. May 8th is the official release date for it and will be available at all of Tucson’s local comic book stores (check our Facebook page), as well Drawn to Comics in Glendale.

Issue #3 can be purchased early at Phoenix Comicon, and will hit store shelves at the same locations on May 29th

Joshua: We’re looking into the digital format as well as getting our book to as many stores as possible. It’s all dependent on how readers react and the feedback we receive.

GNN: Well, guys thanks again for your time and talking to us. Any last words?

Joshua: BUY OUR BOOK! Ha ha, and if you can catch us May 4 for Free Comicbook Day, and May 23 – 26 at the Phoenix Comicon in Arizona. Also, be on the lookout for NESS EXPRESS and their new release ‘Biker Mice from Mars’!

Joshua: What would I do without you, Booboo?

And lastly, if you missed the 5th annual Tucson Comic-Con 2012, Evil Robo Productions held a panel where “Novem” creators were in attendance. Check it out below!
[youtube http://youtu.be/nCMETrVM9qc]

Chuckie is blogger for fine sites such as Geek News Network and Comic Book Therapy. Burrito enthusiast would be the best way to describe him. Follow Chuckie on twitter @dweebofthedead to read just how much he loves Batman, kind of like a man-crush, but not really. Ok–really.
[SlideDeck2 id=9304]