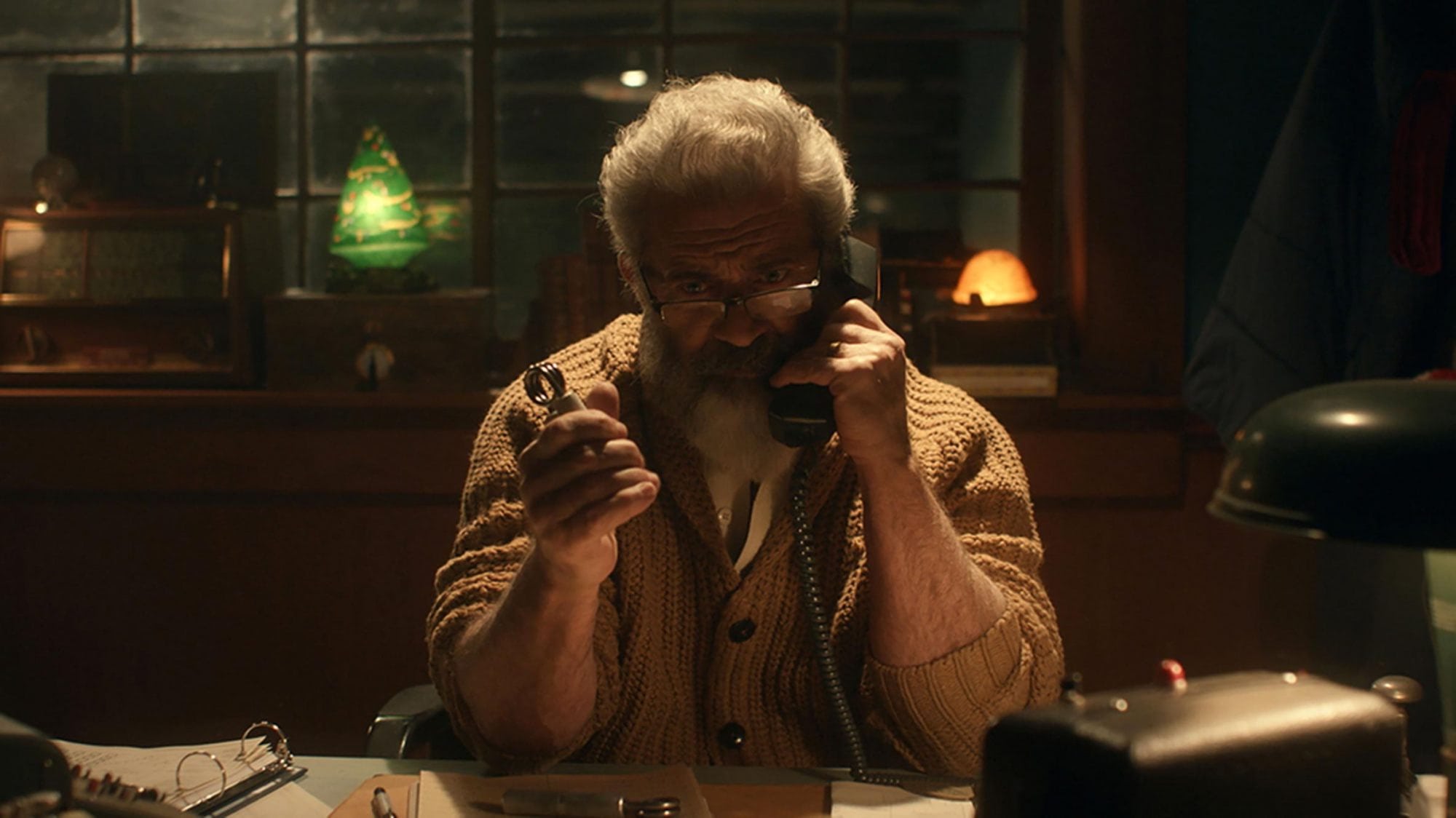 The Naughty and the Nice balance each other out in this dark Christmas movie. (SPOILERS)

I love unorthodox Christmas movies. I’m not talking about movies like Die Hard or Gremlins, which people debate about whether they’re actual Christmas movies or not, (they are).  I’m talking about movies like Better Watch Out (I highly recommend), 2015’s Krampus (I sorta’ recommend), or Black Christmas ( I don’t recommend). These are movies that eschew a majority of the typical tropes of your Christmas story and go a different direction. The movie Fatman falls into this category squarely. These movies have just enough of the ingredients of a Christmas movie such as a theme of charity over greed, good winning over evil, or the discovery of the “true meaning of Christmas”. However, what sets these apart are the tweaks, twists, and turns to make them unique.

Fatman, which was made available for purchase on Amazon Prime, is one such movie. In it, Mel Gibson plays a jaded, tired Santa (or Chris Cringle to the locals) who’s losing faith in the goodness of humanity (and his ability to reward what good there still is) and he’s angry at the caricature he’s become.  This loss of faith is leading to increasing anger and gloom, and him gifting more children with coal, which means fewer presents produced by his workshop. In the Fatman movie universe, the government is funding Santa’s production, and since he’s not producing as many toys, they’re not paying him as much. This lack of funding leads him to a government partnership, which is sort of a weird subplot that doesn’t really play out particularly well. I get it’s trying to take a satirical jab at the meaning of Christmas, but it’s doesn’t really pay off in the end.

The true plot of the movie revolves around perhaps the worst child ever, Billy Wenan (played with truly evil panache by Chance Hurstfield), who is quite simply a total psychopath.  However, we really only learn that Billy lives with his grandmother and father, who apparently is never around and thinks Billy is four years old and not the tween that he is. An absentee father seems to be a weak backstory for supervillain-in-training Billy, who hires a hitman to threaten a science fair rival, and eventually, kill the titular “Fatman.” Santa’s crime? Giving Billy a lump of coal for…well, being a complete psychopath.

The high point of the movie is the assassin Billy hires, “The Skinny Man,” who is played with over-the-top weirdness by…well…over-the-top weird (but mega-talented and equally underrated) character actor Walton Goggins. You see, The Skinny Man had a legit bad childhood (complete with cigarette burns on his arm), and outside of gifting him a toy car, Santa never answered his letters for new parents (Santa admits during their confrontation that, “I’m sorry, son. There are limits to what I can do. I couldn’t replace your parents.”), so this quest to kill Santa is right in his wheelhouse. Again, some cigarette burns don’t exactly flesh out the backstory of a cold-hearted killer…I wish they would’ve had some backstory on The Skinny Man, like an opening flashback to his terrible childhood.

So, this movie has an interesting premise; a good, tight cast (including Marianne Jean-Baptiste, who plays Sant’s wife Ruth Cringle with a tired warmth and empathy for her husband’s malaise and Eric Woolfe, who plays Elf 7, the foreman of the elves, who provides dry, but hysterical, exposition explaining the existence of the elves and how they get so much work done); some good performances; and a script with some decent writing. Why, then, is it only average?

Well, my first knock on the Fatman movie is that it’s kinda’ boring. The pacing is decent in chunks but then slows to a near grinding halt as we watch the Skinny Man slowly stake out a post office, slowly cross the Canadian border, and slowly prepare for a long car trip. Instead of the drawn-out scenes they included, they could’ve spent more time providing examples of Santa losing faith in humanity (even though we see examples of it everyday in the real world), or more backstory on Billy or The Skinny Man…I mean, these are two evil people, and we only see a sliver of why they’re so bad. Also, at the risk of a small spoiler, a criminally low amount of time is dedicated to the final confrontation between Santa and The Skinny Man. It was good while it lasted, but it was almost over before it started.

My other major knock on the movie was the weird tonal shifts in the movie. The Skinny Man murders almost everyone he comes across, yet owns a hamster that he can’t bring himself to leave alone.  The elves in Santa’s workshop go from empathetic characters to sugar-gulping weirdos (ala Buddy in Elf) who put sprinkles in their sugary fruit punch. This movie advertises itself as an action comedy, but there isn’t much action outside of small bursts, and there’s as much gratuitous violence as comedy.

Finally, as I mentioned earlier in the review, the Santa-government plotline is odd and doesn’t really go anywhere, with the exception of providing a tiny bit of backstory on the business-ification of Santa.  It’s sort of a funny relationship that will provide parents with some logical answers when their children start asking questions about the logistics of a man creating and delivering presents to all of the world’s children in such a short period of time. However, the overall government partnership storyline only seems to exist to (spoiler alert again) provide more fodder for the final battle between The Fat Man and The Skinny Man.

There are a couple of other minor things that nag at me, too.  There are some relatively subtle political messages woven into the tapestry of this movie, mostly tied to big businesses making out like bandits while the “little guys” like Santa are struggling to keep the lights on and the elves….err, workers…paid. I tend to toss that stuff out of my brain when I’m watching a movie for entertainment purposes, but I’m sure some people will dislike the movie for that reason alone. Also, some people probably won’t watch Fatman the movie on principle because Mel Gibson is in it, and the fact that a Santa played by Gibson is in an interracial relationship is almost screaming, “See, folks!  I’m not racist!” Oddly, though, Gibson does a great job playing an overworked, underappreciated Santa who is losing faith in the goodness of humanity and Jean-Baptiste is fantastic as Mrs. Claus, who, despite a running gag that relegates her to baking cookies, is the rock on which Santa depends for support, encouragement, and love. The two have a quietly powerful relationship, which should’ve been explored more.

All in all, Fatman is a quirky Christmas movie that has its moments… some warm, some intense, and some funny. However, the gaps between those moments can draw out at times. The worst crime about those gaps is that there’s enough story in this world to fill in those gaps and more. It’s a shame the folks involved in the making of the movie chose to slow roll scenes that didn’t need to be slow rolled and dwelled on things that weren’t integral to the plot instead of sticking with the characters and stories that were better.

Also, tonal shifts plague the movie with some moments that are borderline cringeworthy.  While I understand that a movie with a cold-blooded killer will have some killing in it, the killing seemed weird and pointless at times…is the Skinny Man a killer for killing’s sake, or is he a businessman who kills only as needed and when he’s paid to do it? We see shades of both in the movie…again, a little more time with him (not just driving or emptying his pee bottle) would’ve helped.

Fatman, like a lot of movies that I’ve been watching lately, is right in that C+ range. It was okay, but not a movie I would choose over my 58th viewing of Die Hard. If you choose to watch Fatman this holiday, you’ll most likely have a “meh-ry” time.

+ The cast is good and they do a great job with what they’ve been given.

+ The idea behind the story and the logic of the world the writers created are both solid, if underdeveloped.

+ There are some funny, heartwarming, and intense moments throughout.

– The pace drags a majority of the time.

– The tone of the movie shifts a lot; the movie doesn’t seem to know what it wants to be.

– Too much time is spent on a plot that’s not as interesting as it could’ve been.

Synopsis: A Santa Claus who is losing his faith in humanity and himself is fighting to save his declining business. Meanwhile, Billy, a borderline psychopathic 12-year-old, hires a hitman to kill Santa after receiving a lump of coal under his tree.