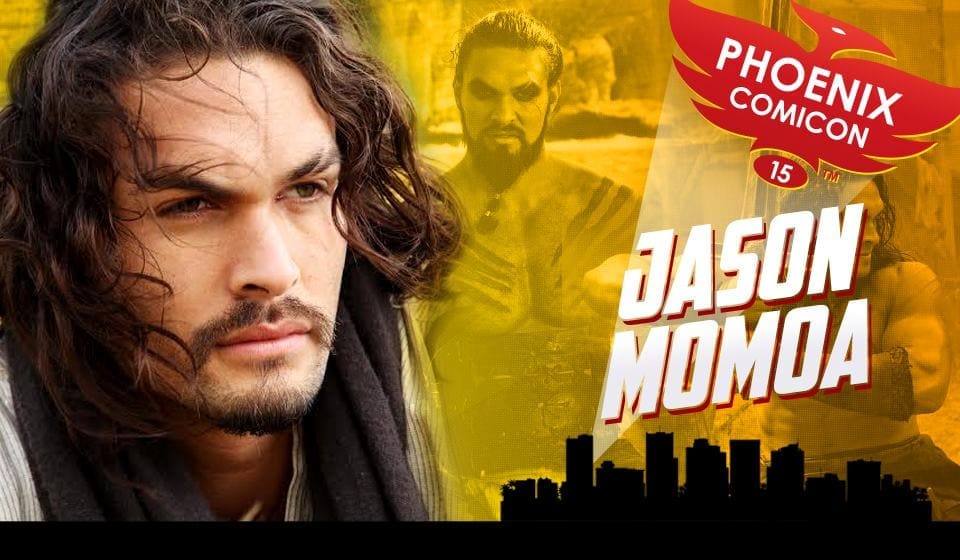 Summer Glau most recently has appeared in the television show Arrow, but she is best known for her portrayal as River Tam in Firefly and Serenity and as a Terminator in charge of protecting John and Sarah Connor in Terminator: The Sarah Connor Chronicles.

Jason Momoa. Get ready to swoon! The future Aquaman will be visiting the desert. Jason is also known for his previous roles in Stargate: Atlantis and as Khal Drogo in Game of Thrones.

Edward James Olmos. It’s hard to know where to begin when describing the accomplishments of Edward James Olmos. Phoenix Comicon is humbled to be welcoming such an accomplished actor and director. His roles have been diverse, but for Comicon fans, he is probably best known for his role as William Adama in Battlestar Galactica and his current role in Agents of S.H.I.E.L.D as Robert Gonzalez.

Charisma Carpenter our favorite cheerleader who redeemed herself for fighting against evil in Buffy: The Vampire Slayer and Angel. Charisma is currently hosting Surviving Evil on Investigation Discovery, with other recent guest spots on Sons of Anarchy and Blue Bloods.

Fans of Jim Beaver have a hard time deciding which is their favorite role for him. He is best known for his role in Deadwood, which earned him a Screen Actors Guild nomination. He also played advice-giving Bobby Singer in Supernatural and the conflicted Sheriff Shelby Parlow in Justified. Next time you’re up for a TV marathon, all three shows are highly recommended viewing.

Paul Cornell, probably one of the best authors/screenwriters associated with the current Doctor Who franchise. He is a Hugo Award winner for Best Fancast and a multiple nominee for Best Graphic Story and other categories.

Marv Wolfman award-winning comic book writer, is best known for being the creator of vampire-hunter Blade during his run on Marvel Comics’ The Tomb of Dracula. He has also worked on DC’s The New Teen Titans, where he co-created Raven. Two of his characters appeared in the new movie Guardians of the Galaxy, Nova Prime and Corpsman Rhomann Dey.

Be sure to stop and say hi to Mike Zeck to see if he’s created any Phoenix Comicon exclusives! This comic book artist is best known for his work with Punisher and the Walking Dead comic books.

Renee Witterstaetter, writer, editor, color artist, agent, and publisher has 318 comic book credits to her name. Alongside her comics work for Marvel, DC, and Topps Comics, she is the president of Little Eva Ink Publishing. She is currently working on the Creator Chronicles DVD series, featuring interviews with major industry creators.
In the past three years, New York Times bestselling author

Sherrilyn Kenyon has claimed the #1 spot sixteen times. This extraordinary bestseller continues to top every genre she writes. With more than 25 million copies of her books in print in over 100 countries, her current series include: The Dark-Hunters, The League, Chronicles of Nick, and Belador. Since 2004, she has placed more than 50 novels on the New York Times list in all formats including manga. The preeminent voice in paranormal fiction, with more than twenty years of publishing credits in all genres, Kenyon not only helped to pioneer, but defines the current paranormal trend that has captivated the world.

Billy Tucci award-winning creator of the graphic novel series Shi, is a former paratrooper who has created and published the properties ATOMIKA, Gremlin Effect, Victoria Cross, The Burning Blue and The Undaunted. His work has been featured in The New York Times, NY Daily News, Newsday, Elle and Playboy. In 2006 he pencilled Marvel’s Heroes for Hire title, and in 2008 he commenced working on DC Comic’s Sgt. Rock: The Lost Battalion. Tucci has also been working on animation and film projects.

After teaching literature, philosophy, history, and religion for more than a decade, Brian Staveley began writing epic fantasy. His first book, The Emperor’s Blades, debuted to both critical and popular acclaim, and the second in the trilogy, The Providence of Fire, has also garnered rave reviews.

Cherie Priest is the author of over a dozen novels, including The Steampunk Pulp Adventures, The Inexplicables, Ganymede, Dreadnought, Clementine, and Boneshaker. Boneshaker was nominated for both the Hugo Award and the Nebula Award; it was a PNBA Award winner and winner of the Locus Award for Best Science Fiction Novel. Cherie also wrote Bloodshot and Hellbent from Bantam Spectra; Fathom and the Eden Moore series from Tor; and three novellas published by Subterranean Press.

Lou Ferrigno is joining us at Phoenix Comicon again in 2015! Best known to many as The Incredible Hulk, Lou first portrayed the character in 1977 on television and in movies and continues to voice the role. Lou is also known for his appearances in The King of Queens, I Love You Man, Reno 911, and recently was in an episode of Star Trek Continues. Lou will again voice the Hulk in the upcoming Avengers: Age of Ultron.

Author Michael J. Martinez has spent nearly 20 years as a professional writer and journalist, including stints at The Associated Press and ABCNEWS.com. After telling other people’s stories for the bulk of his career, He’s happy that he can now be telling a few of his own creation. Michael is a member of the Science Fiction & Fantasy Writers of America and International Thriller Writers. His first two novels, The Deadalus Incident and The Enceladus Crisis are available now with the third novel, The Venusian Gambit being released in May of 2015.

Sam Sykes is the author of The City Stained Red and The Aeons’ Gate Trilogy. He lives in Arizona. He is very tall and handsome and can catch a salmon out of a stream with his hands.

New York Times best-selling author Scott Sigler is the author of fifteen novels, six novellas and dozens of short stories including his YA Galactic Football League series (The Rookie, The Starter, The All-Pro, The MVP, and The Champion). Scott reinvented book publishing when he released Earthcore the world’s first “podcast-only” novel. Released in twenty weekly episodes, Earthcore harkened back to the days of serialized radio fiction. His innovative use of technology puts him at the forefront of modern-day publishing and has garnered brand-name exposure among hundreds of thousands of fiction fans and technology buffs.

Weston Ochse is the author of twenty books, most recently two SEAL Team 666 books, which the New York Post called ‘required reading’ and USA Today placed on their ‘New and Notable List of 2012.’ His first novel, Scarecrow Gods, won the Bram Stoker Award for Superior Achievement in First Novel and his short fiction has been nominated for the Pushcart Prize, as well as been multiple finalists for the Bram Stoker Award. His work has appeared in comic books, and magazines such as Cemetery Dance and Soldier of Fortune.

Yvonne Navarro an American author who has published over twenty books, the titles AfterAge, deadrush, Final Impact, Red Shadows, DeadTimes, That’s Not My Name and Mirror Me were solo novels, or fiction created solely by her. Her most recent works Highborn and Concrete Savior are part of The Dark Redemption Series

Full event passes are only $70 until March 31st and can be purchased at www.phoenixcomicon.com so get your tickets early. With an increased attendance of over 50,000 in the past three years the info section in Phoenix Comicon’s official site is an amazing tool in planning your comicon weekend. From hotel and restaurant info, to where you are able to park and register it is highly recommended for both the first time con goer, or the weathered veteran, to take a few moments and plan ahead for the best con experience possible.