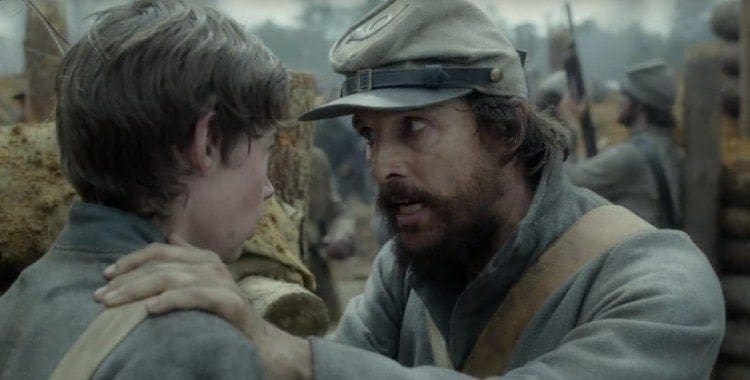 Free State of Jones is a film that dramatizes the life of Newton Knight (Matthew McConaughey). Knight was a member of the Confederate Army during the Civil War, but deserted sometime after the law was passed to allow rich plantation owners to avoid military service. While the film takes place during and after the Civil War and features a variety of slaves and the poor race relations of the time, this isn’t a movie about slavery. This is a film about Newton Knight and his fight for what he believed was right.

If you’re a historian or have taken some interest in the real Newton Knight, you may find that Free State of Jones leans more on the dramatic side of things instead of keeping the film as factual as possible. Some of Knight’s motivations, as well as the portrayal of events differs considerably from what is believed to have actually happened. However, both the movie and history agree that Knight formed a company of farmers, slaves and Confederate deserters that fought against the Confederate forces toward the end of the Civil War.

Free State of Jones skips over many of the details of Knight’s life, and instead implies certain things. This allows the audience to assume some events have happened based on what they see on screen. For the most part this works out and shows that there’s some respect for the intelligence of the audience. However, throughout the film the setting changes from the Civil War to the late 1940s in order to showcase a court case that featured Knight’s great-grandson. While the reasoning for these 1940s scenes is made clear by the end of the film, they are scattered somewhat randomly throughout the movie and make for a jarring transition that doesn’t make a lot of sense as you’re watching.

The film stars Matthew McConaughey as Newton Knight, Gugu Mbatha-Raw as his eventual wife Rachel, Mahershala Ali (of House of Cards fame) as Moses and Keri Russell as Knight’s first wife. All of the main characters offer stellar performances, with each one attempting to steal scenes at every turn. Every action is believable and you may even find yourself nodding along in approval of the actions depicted on-screen.

Where Free State of Jones falters is in the final act. Knight’s motives are clear during and immediately after the Civil War. However, as the film moves into Knight’s later years you begin to wonder how things will conclude. With the Civil War over and most of Knight’s significant accomplishments behind him, the film just kind of coasts to an ending that isn’t particularly satisfying. There’s an attempt to add an exclamation point to the end of the movie by focusing on the 1940s court case, but that just adds more confusion than anything else. It definitely feels as though the writers didn’t know how they wanted to end the film.

It’s worth noting that Free State of Jones is a hard R-rated film. The Civil War portions of the movie have a close resemblance to Saving Private Ryan in how graphics some scenes can get. There are also a few scenes of violence against former slaves that can get graphic at times. If you’re okay with a bit of graphic violence and can get over a lackluster ending, Free State of Jones can be an inspirational film. Overall it’s an interesting watch, but it will likely be forgotten in a few weeks time.

About Free State of Jones

Synopsis: As civil war divides the nation, a poor farmer from Mississippi leads a group of rebels against the Confederate army.