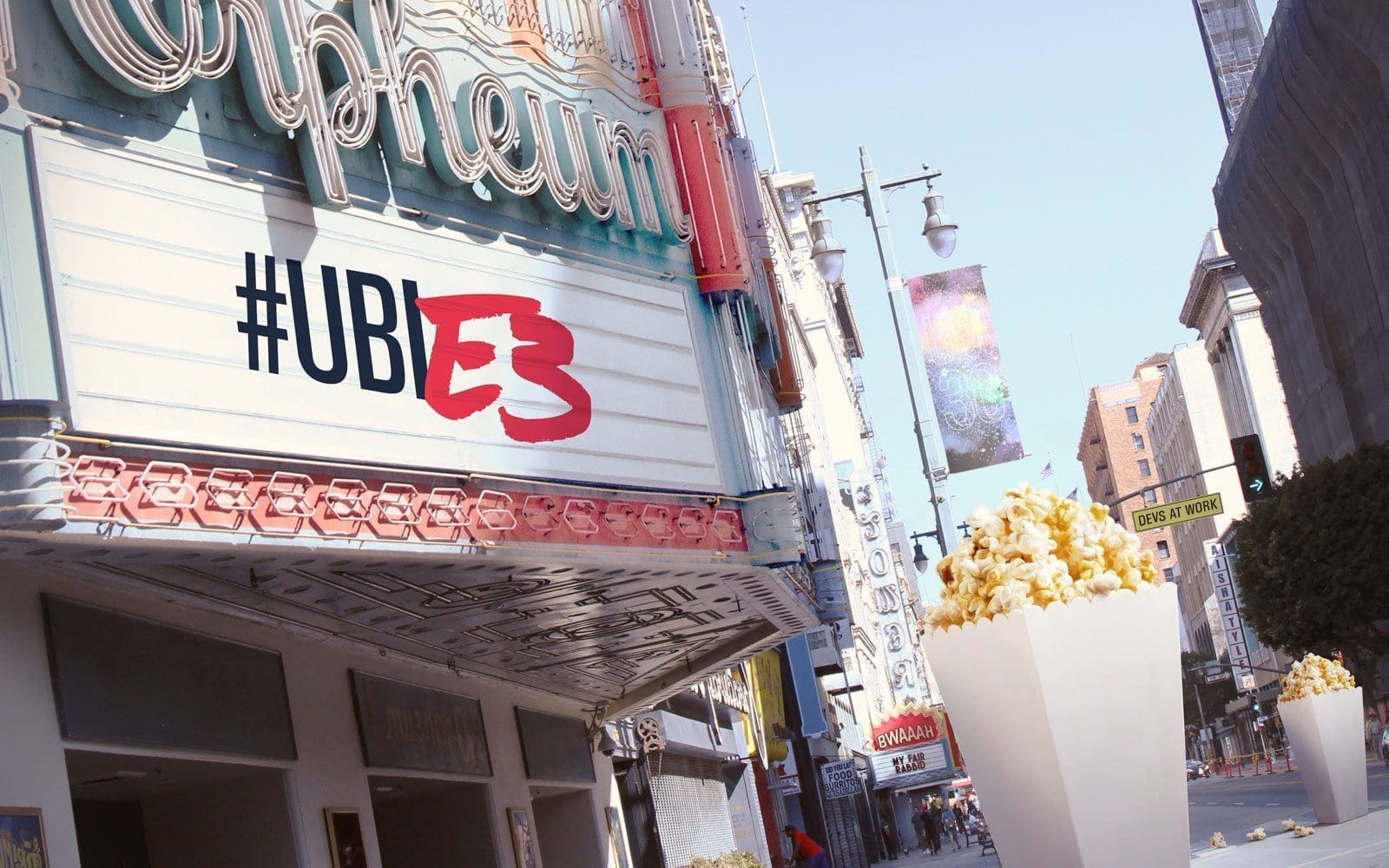 Last week I was fortunate enough to go to E3 and check out all sorts of upcoming games. Of all the booths I visited, Ubisoft’s was by far one of the most impressive. I spent my entire second day of E3 with Ubisoft and I’d like to tell you about all the games from Ubisoft we’ve got coming our way!

Knights, Vikings, and Samurai oh my! These three factions are well known in both fiction and non-fiction stories alike and in For Honor they’re fighting each other! This year’s E3 gameplay demo in the Ubisoft press conference showed Viking gameplay, but in my hands-on demo I played through the first chapter of the game as a knight. While speaking to a member of the dev team I was told to expect that each chapter in-game would follow a different faction as the story progresses. In this chapter I defended my castle against a siege by rival knights. As enemies clambered over the wall and poured through smashed doorways two types of enemies sought I demise. Some knights were easily felled with one swing of my sword, while others went toe-to-toe with me as we tried to best each others’ defenses. While these two enemy types weren’t explicitly named, I’ve been referring to them as peons and champions. Smashing through groups of peons was reminiscent of Dynasty Warriors and made me feel incredibly powerful. Champions, however, required a bit more strategy. This is where For Honor‘s combat system truly shines. When you lock onto enemies a segmented circle appears in the center of your HUD indicating your stance. By choosing up, left, or right this indicator not only shows where you’re defending but also where you’ll attack. By flicking the right analog stick in one of the three directions you’ll change your stance. This can be done on the fly for either a last-minute block or for a quick attack from an unexpected angle for your opponent. When an opponent attacks one of the three segments will flash red to give you a chance to block. If your stance is the same as your enemies you can shoulder them to break their guard leaving them vulnerable momentarily. I enjoyed switching my stance on the fly as I defeated each intruder. Scattered throughout the map were “feats” various abilities hot-keyed to the D-pad that I could activate in the middle of a battle to give me the upper-hand. From increased damage output to health regeneration these fates can turn the tide of a battle. When I reached the end of the chapter I faced an even more difficult enemy class (which I’ll call elite) in a trial by combat to decide the victor of the battle. This fight put by reflexes to the test as my opponent switched stances as often as I did for an intense, exhilarating duel to the death. For Honor‘s combat system paired with its beautiful graphics resulted in an addicting experience and I eagerly await its release in February.

With a name like that this game can’t possibly fail…however humor isn’t this game’s only strong suit. Don’t get me wrong, humor is by and large the center point of this crass franchise and this game is no different but there’s more to it than that. I saw an extended gameplay demo behind closed doors showcasing various gameplay and customization options in the game. Combat in Fractured But Whole is a light, turn-based strategy RPG. There is a set order in combat(much like initiative in D&D) as each character as set movement and range each turn. Characters attacks are determined by their class, with twelve base options available. Not all classes have been revealed, but so far we’ve seen: gadgeteer, elementalist, blaster, hunter, vampire, summoner, brutalizer, and speedster. Characters can be cross-class like an elementalist blaster, or a hunter vampire for example. That’s 78 class options to choose from (I did the math just trust me)! Combat focuses on two things: space and time. Movement and attack order, it’s easy! Nothing is set in stone, however, as abilities like “time farts” can turn back the clock and reset the order. That’s right…time farts. Certain attacks will also affect movement both for you and your enemies. Speedsters for example can have increased movement for a round, leading to more attacks. Other attacks can push or pull your enemies, potentially bringing them in range of the rest of your party. There’s also a basic crafting system to make different consumables, like an enchirito for example (burrito/enchilada). These consumables have a wide range of effects from health regen, damage output, increased movement, etc. Fractured But Whole looks as fun as it does funny and I can’t wait to see Coon & Friends take on the Freedom Pals this December!

Ubisoft’s latest new IP, Steep, is an open world, adrenaline-fueled simulator atop a snowy mountain range. After seeing the trailer for Steep in Ubi’s press conference I wasn’t entirely sure what the game’s draw was but after a hands-on demo it makes a bit more sense. In Steep, players complete various challenges based on score and completion time. Following the completion of a challenge you can challenge your friends to beat your score/time and even make your own challenge runs just from free roaming! The preset challenges reward players for taking risks rather than sticking to the Forza-esque guideline projected ahead of you. Weaving through trees in a wingsuit, for example, gives big bonuses but don’t let a branch catch you! I found myself having to restart frequently as I attempted increasingly heinous stunts to get huge payoffs. There are various spawn points players can start from with suggested modes of transportation recommended for each one (wingsuit, skis, snowboard, paragliding). These modes of transportation can be changed on the fly (just not while flying). For example, I started on a wingsuit platform and when I landed further down the mountain I switched to my snowboard and continued my descent. Where Steep truly shines is when using the GoPro-sponsored first-person mode. Bobbing and weaving through obstacles in my wingsuit while in first-person was truly incredible. No details on a release date or window have been revealed yet, but I look forward to seeing more of Steep soon.

I don’t know about you guys, but I cannot wait to get my hands on Watch Dogs 2. For years I’ve been using the Watch Dogs/Assassin’s Creed comparison and I expect big things from Watch Dogs 2. In a behind closed doors presentation I saw an extended version of the mission shown in the latest gameplay trailer. In the demo more time was taken to show the pier area, profiling various passerby and even doing a little shopping! In Watch Dogs 2 players can customize Marcus from head to toe, not just swap color palettes like Aidan last time around. In-game apps were also shown off, such as the ride share app that lets you meet interesting NPCs and even stumble upon new missions! The profiler has been revamped, now displaying the emotional state of enemies and citizens alike. This emotional state can be affected by the range of emotes available to Marcus, giving players greater effect on the world around them. These same emotes can be used to party up with other players you run into by simply waving at them and them returning the gesture. Lastly, the entire demo was running live on a PS4 and by golly it looks fantastic.

Last, but definitely not least, is Ghost Recon: Wildlands which I was able to play hands-on. The size and scope of the map in Wildlands cannot be understated. As we flew from one mission objective to the next the developers told us every single mountain and landmark we could see from on high is reachable in-game. I was blown away by how much freedom we (myself and co-op partners) were given as we tackled each mission objective. Coordinating strikes against enemy camps or pursuing elusive targets was tight, tactical, and immensely fun. Wildlands can be played start to finish solo if desired, but co-op play made my time with this game truly memorable. After roughly twenty minutes our demo had reached its end, however the sheer number of available missions laid out across the map was staggering to say the least. I cannot wait for Ghost Recon: Wildlands come spring, this is a game that should not be ignored!

Well there you have it, Ubisoft was out in full force on the E3 show floor this year and we’re in for a fantastic lineup in the coming year!

[…] has long been a cornerstone of E3 and while we were huge fans of their show floor offerings last year, Ubisoft often stumbles when it comes to the press […]