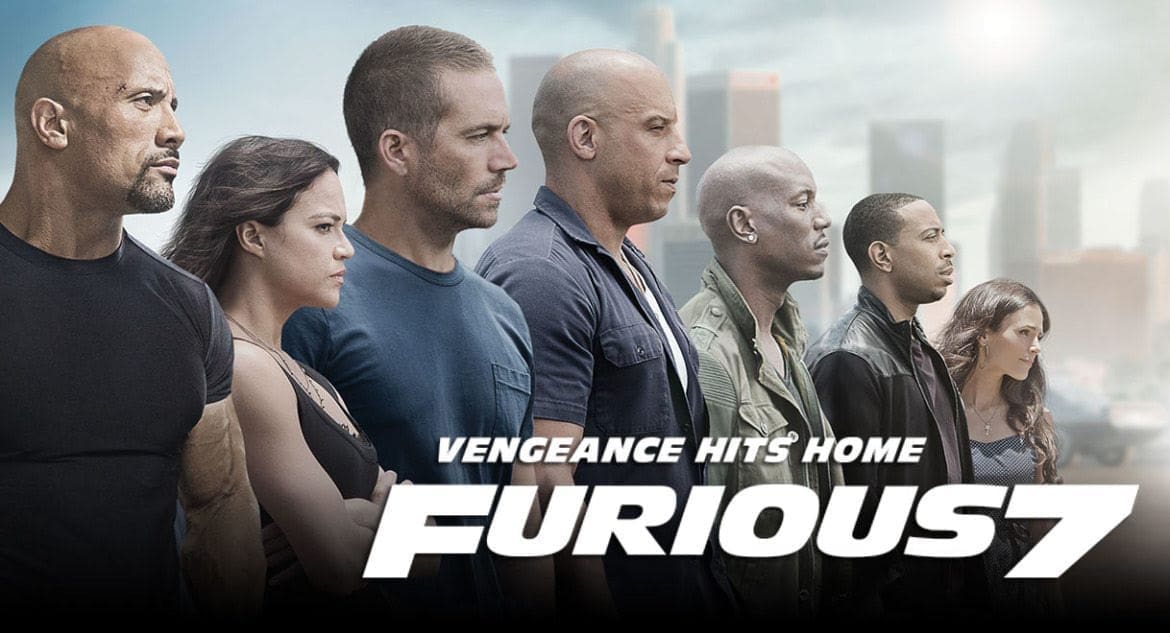 The Fast and the Furious franchise has never been known for its realism. It’s always been an over-the-top thrill ride that taps into the hearts and imaginations of street racers. As the series evolved it added international destinations and almost a James Bond secret agent vibe with the crew bringing down evil criminals and stopping crimes in elaborate fashion. But now that we’re seven films in, can the series still bring the thrills? The answer is a resounding, “yes.”

If you’re looking for something even remotely realistic, this is not your movie. Furious 7 has a lot going for it, but realism was never a consideration while the film was being made. This is the most ridiculous, crazy, insane, gravity-defying action movie you’ll see this year (although Mad Max looks to be in competition for that title). If you thought it couldn’t get any more insane after the last two films, think again, because the crew has topped themselves one more time.

The film wastes no time getting you back into the driver’s seat. Even with the untimely departure of Paul Walker, the filmmakers don’t try to pull on your heart-strings over and over again. You’ll feel it, but don’t expect to be wiping tears from your eyes every 10 minutes. This is a raw action movie and a fitting send-off to one of the series’ mainstays.

Fans of the Fast and the Furious franchise will feel right at home with Furious 7. Dominic Toretto, Brian O’Conner, Roman, Tej, Letty, Mia and Hobbs are all back and exactly as you remember them. Every single member of the family has at least a few scenes to truly shine. This is the perfect example of how to handle an ensemble cast, although it would’ve been nice to see a bit more of Dwayne Johnson’s Hobbs character. He has the least amount of screen time compared to the rest of the crew, but when he is on-screen it’s impressive.

New to the franchise are Kurt Russell as Mr. Nobody and Nathalie Emmanuel as hacker, Ramsey. Kurt Russell requires no introduction and plays his role to perfection from beginning to end as if he’s been part of the franchise since the beginning. Emmanuel steps out of her Game of Thrones shell and becomes a surprisingly welcome addition to the family. She fits right in with the rest of the crew and helps even out the cast now that many of the strong female characters from the previous movies are no longer along for the ride.

The big bad guy this time around is Jason Statham as Deckard Shaw. This is the role Jason Statham was born to play and you can tell he has a lot of fun in the film. Unlike most bad guys who only make a stand at the end of a movie, Shaw is relentless. He does not give up and continues to be a thorn in the side of our heroes constantly throughout the film. He’s a formidable adversary who quickly makes you understand just how dangerous he is.

While there’s a lot of great things going on in Furious 7, it’s not all popcorn and ice cream. Director James Wan tries to embed his unique brand of filmmaking into the Fast and Furious franchise, but it doesn’t always come off as well as he’d likely hoped for. There are a number of rotating camera angles that work well-enough the first time you see it, but by the third time you’re ready for something a little more traditional. Not all fans will have an issue with some of the camera angle choices, but it definitely won’t appeal to everyone.

It’s hard to say Furious 7 is the best film in the series because the franchise has evolved quite a bit from its humble roots as a racing movie. In terms of over-the-top action, this is the best movie in the series, but as an overall film it’s hard to give it that number one spot. At the very least it’s top three and some people will definitely feel it places in the top two, but fans of the franchise will be hard-pressed to call it the best. Still, Furious 7 is easily one of the most entertaining films of the year and a lot of moviegoers will be anxiously crossing their fingers for an eighth film in the franchise, as odd as that may sound.

Synopsis: Deckard Shaw seeks revenge against Dominic Toretto and his family for the death of his brother.