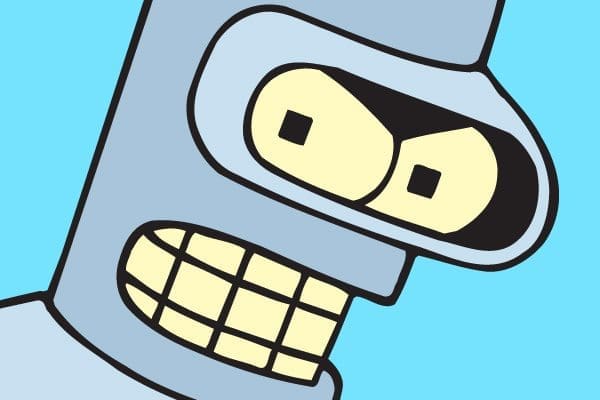 Last night was a bitter sweet moment for me as it saw the end of my favorite TV show, Futurama. For thirteen years Fry, Bender, and Leela took us throughout the galaxy on a fun, irreverent, and sometimes heartfelt journey. Whether it was the complete insanity of Old New York or the ultra-clever, and probably accurate, time travel episodes, Futurama never ceased to amaze and entertain me.

If I’m honest, I lost track of the show while it was still in its original run and through a chance outing to Best Buy picked up the first volume on DVD. I couldn’t tell you why I bought it. I vaguely remembered watching the show and remembered liking it so maybe that was the reason, but in the grand scheme of things it doesn’t matter. I watched those thirteen episodes over and over again and reveled in the dry wit. After that I was always at Best Buy the day of release, about a minute after they opened, to pick up the next volume that was released.

I didn’t even know the show was cancelled until years after the fact. Keep in mind this is in the days before smart phones and the popularity of Wikipedia. So for those couple of years in between the cancellation and the movies all we had were the four volumes, but that was enough. When the news broke that we were getting four feature length movies I was overjoyed. Unfortunately, with the release of Bender’s Big Score I was a little disappointed to say the least. Really, it wasn’t until Bender’s Game that I felt the movies hit their stride. When the movies ended and the show was “over” again I felt content because it ended on a good note and with some finality. It was rumbled about throughout the movie run that if they performed well the show might get picked up for more episodes. Our wishes were granted when Comedy Central picked up the series.

Maybe it was my overabundance of excitement, but when the show returned I was never really impressed with it. There were some stand out episodes, like “Attack of the Killer App” but for the most part it never felt like the writers were in the same place as the original run. I have a theory that the show started its downfall when Fry became content with the future. A lot of the jokes and gags from earlier involved Fry trying to adjust to different aspects of the future, however mundane they might have been.

My favorite episode happens to be “Roswell that Ends Well.” This episode stands out to me because of the many repercussions it has, both within the show and real life. We find out that the spaceship that crash landed in Roswell, New Mexico was in fact a misassembled Bender and the alien was Dr. Zoidberg. Fry also sleeps with his Grandmother which in turn makes him impervious to the flying brain attack that occurs later in the series.

Futurama is great to watch over and over again and watch all the little in jokes for events that don’t take place for a few more seasons. If you watch the pilot, when Fry falls into the cryo-tube, you can see Nibbler’s shadow.

Earlier this year when Comedy Central announced that they weren’t renewing the show for another season I was strangely relieved. As I mentioned earlier I felt that the show had been on a steady decline and I felt the cancellation was in the best interest of everyone. It was like having to put down a beloved pet who was sick for a long while. I love the show very much, and I always will, but it wasn’t doing anybody any good crawling around the house wheezing and feeling sorry for itself.

I felt that “Meanwhile” ended the show very poignantly and sends the viewer right back to the beginning, which I will gladly do over and over again.