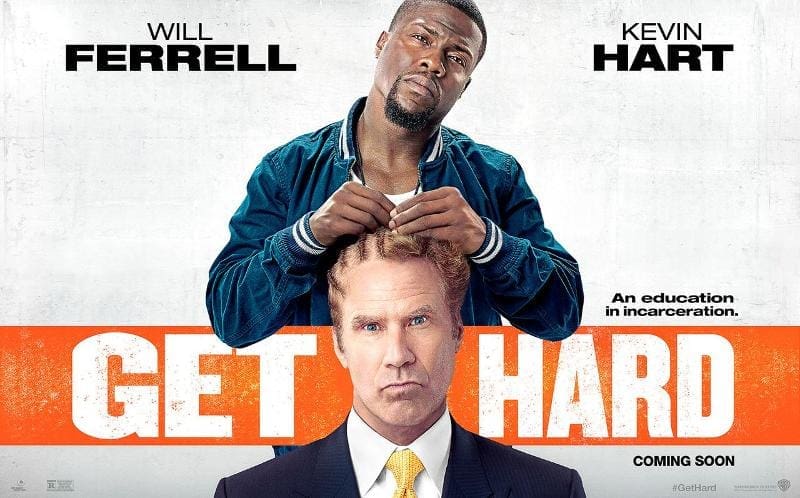 Kevin Hart and Will Ferrell have both had a long line of comedy releases. Some have been good, while others have fallen flat. If you’re a fan of Hart’s movies there’s definitely something to enjoy in Get Hard. If you’re a fan of Ferrell’s movies, this isn’t his typical style, but that’s not necessarily a bad thing. Get Hard offers an interesting blend between Hart’s brand of humor and Ferrell’s trademark style, but it benefits Hart more so than Ferrell.

Most audiences know what to expect from Kevin Hart and Will Ferrell. With the presence of Will Ferrell in Get Hard, it seems to elevate Hart to new heights. There are multiple scenes in which Hart seems to knock it out of the park and really overshadows Ferrell. That’s not to say Ferrell isn’t on his game, it’s just that audiences know what to expect and he doesn’t go above and beyond those expectations. This isn’t Step Brothers or the original Anchorman. Ferrell isn’t topping any of his previous performances in Get Hard, but Hart really brings the funny and lifts Ferrell in the process.

There are very few scenes in Get Hard where Ferrell carries a scene on his own. Most of the time Ferrell is impressive he’s playing off of Hart. There are one or two exceptions, which we won’t spoil here, but most of the movie is Hart stealing scenes.

The premise of Get Hard is ridiculous, but that’s the point. Hart plays Darnell, who owns a car wash business and is struggling to get his family out of the hood. Ferrell plays James, who is a millionaire that gets into trouble and is sentenced to serve in maximum security prison. When he asks for Darnell’s help to prepare him for the prison experience, that’s when the funny starts to kick into high gear.

The interactions between Ferrell and Hart during “prison training” are the highlights of the film. Not every joke works, but the jokes that hit, hit hard. There are some big laughs to be had that will remind you of some of Hart’s best films. However, nothing really comes close to Ferrell’s best comedies, but that’s a fairly high bar to meet.

You don’t see much of the supporting cast as the film really is Hart and Ferrell interacting with one another, but T.I. as gang leader Russell, and Erick Chavarria as James’ gardener, Cecelio add quite a bit to every scene they’re in. T.I. in particular does a great job of shifting from a friendly guy to a fearsome thug and back. He really shows some diversity in the limited screen time he’s given.

Comedies are always very subjective. One person and love the same comedy someone else hates. If you’re a fan of Hart’s films and enjoy Will Ferrell, there’s a good chance you’ll like Get Hard. If you only enjoy Ferrell’s big hits, this may not have enough funny for you to enjoy. Either way, Get Hard is a solid film and a step up for Kevin Hart.

Synopsis: When millionaire James King is nailed for fraud and bound for San Quentin, he turns to Darnell Lewis to prep him to go behind bars.