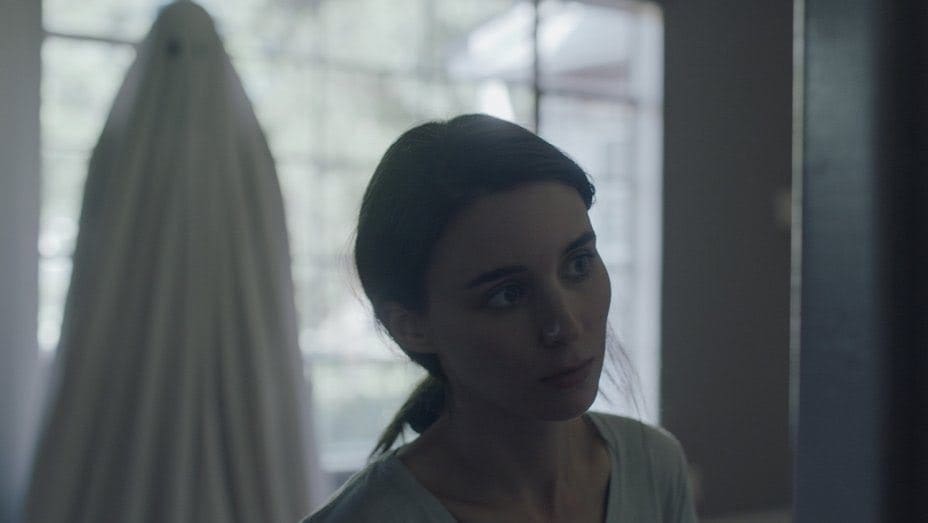 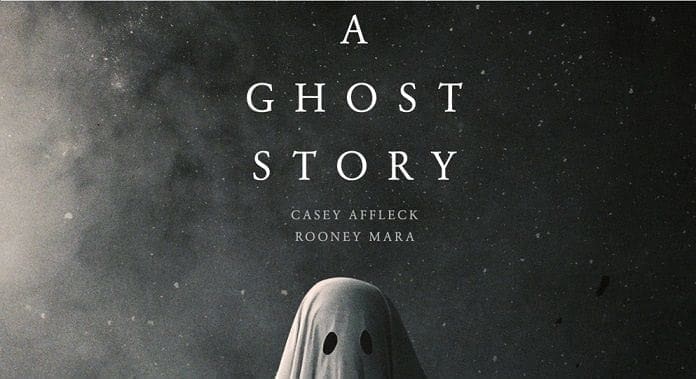 The studio A24 has made a name for itself by providing audiences with unique films that subvert their genre.  The Witch, Swiss Army Man, and The Lobster are examples of a certain style of filmmaking this company encourages.  These films lean heavily on character development but are combined with a note of abstract reality.  A strange enough premise that invites us to learn more.  Sometimes it pays off and other times the experience of seeing something completely new is your only reward.  I applaud any effort to tackle original stories in ways we can’t imagine.  It makes our time at the movie theater feel less predictable and more exciting.  It also has a tendency to divide audiences.  The latest feature from A24 will most likely not be universally loved by all.

In A Ghost Story, written and directed by David Lowery, a man (Casey Affleck) dies suddenly and tragically near his home.  He later becomes a ghost, donning a white sheet with holes for eyes.  His apparition does not move on and instead wanders his house, observing his wife’s (Rooney Mara) grief in silence.  As time progresses the ghost steadfastly remains in order to discover its purpose before it can no longer remember.  Is it love that keeps us nearby after death or the memory of what we used to be?

The movie is very straightforward.  The ghost spends a great deal of time moving slowly about the house and other locations.  He stares intently at everyone, but you can’t really ascertain his thoughts because of the sheet.  It’s that lack of identity that makes the ghost so strangely upsetting.  Is it still the man that died or is it just the echo of him?

Much of the film is silent and requires a great deal of patience.  I’m all for scenes building suspense and increasing tension with drawn-out pauses and nervous characters, but this movie makes it difficult not to question the editing from time to time.  One particular moment involving a pie lasts so long with no cuts or change in camera angles that you wonder why you’re still watching this movie.  The director even hinted that this scene is meant to test a viewer’s interest.  If they can sit through this, they have become immersed in the story and will see it through to the end.  I’m not sure I was completely there, but I stayed because that’s my job.  It is worth it though because the story goes off in an interesting direction I didn’t anticipate.  It takes a while to get there so again be patient.

I usually have something to say about the performances of the actors, but this movie doesn’t focus on that.  Anybody could have been under that sheet.  The scenes where Casey Affleck actually has a face and body are few and far between.  Rooney Mara is a great actress, but in this film, she is just present.  The only real character in this movie besides the ghost is time.  How time changes everything and shows us the futility of preservation; because eventually it all gets washed away or torn down.  The most dialogue from any character in this movie is a partygoer at the home.  He spends almost his entire screen time discussing his philosophy on life, the universe, and our legacy in it.  It actually gives us a better perspective on the journey we are taking with this ghost.

A Ghost Story is not your typical indie film and it is definitely not a horror movie of any kind.  I am glad I saw this movie, but I don’t think it warrants you visiting the theater.  Unless you struggle to sit still at home for quiet movies and end up filling that silence by looking at your phone.  In which case I would advise seeing this in the theater so you have no distractions.  The movie is slow to get there, but it has strong moments you will miss if you aren’t paying close enough attention.  Whatever emotion this movie stirs up is completely acceptable.  I laughed several times, became frustrated, and also mesmerized.  It’s that kind of unpredictability that makes me appreciate A24 films.

About A Ghost Story

Synopsis: In this singular exploration of legacy, love, loss, and the enormity of existence, a recently deceased, white-sheeted ghost returns to his suburban home to try to reconnect with his bereft wife.