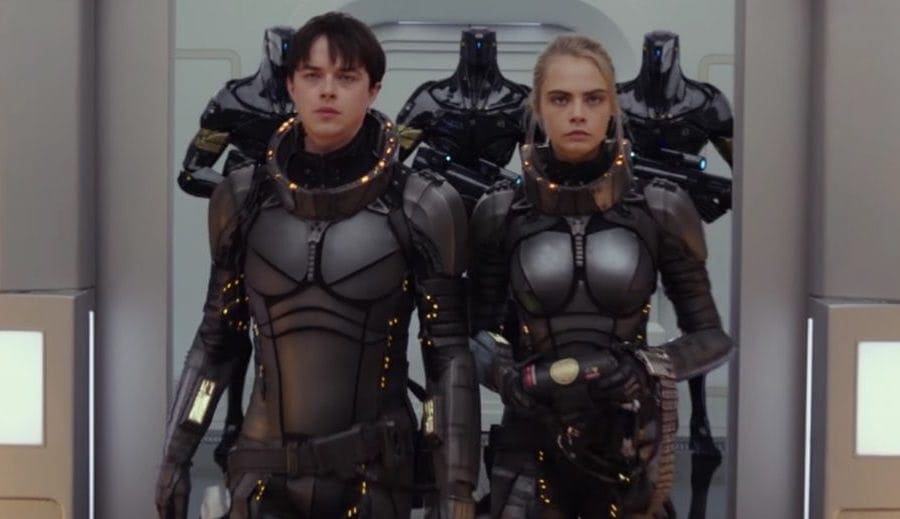 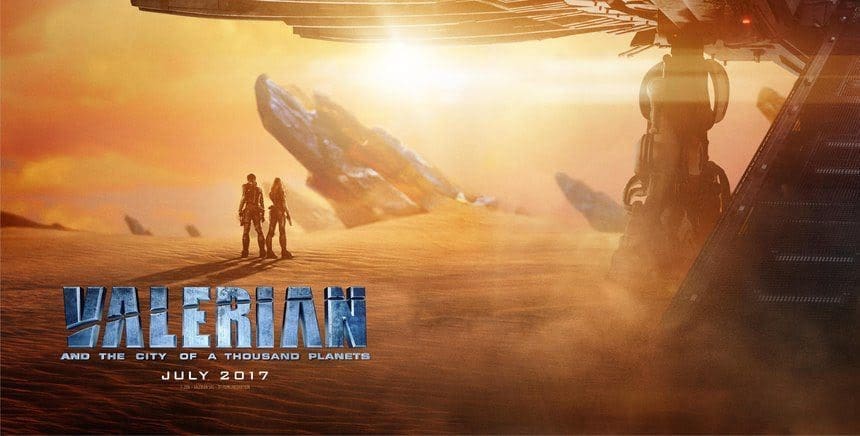 Luc Besson hasn’t had a critically acclaimed film in several years.  His biggest hits, Leon: The Professional and The Fifth Element, were in the nineties.  I did like his writing for Taken, but not the sequels.  It was only a matter of time before that right project fell into his lap.  A story and script that suited his style and capabilities.  Something with action that has off-the-wall characters who make you laugh and support them.  While Besson may not be firing on all cylinders in terms of execution, he is heading in the right direction with this one.

In Valerian and the City of a Thousand Planets, it is centuries in the future and a space station known as Alpha has attracted nations from all over the galaxy.  Beings of different alien species, including humans, live among each other and share knowledge for the betterment of all.  It is a harmonious time to be alive when an unknown force threatens to destroy the station and its millions of inhabitants.  Commander Filitt (Clive Owen) has assigned partners Major Valerian (Dane DeHaan) and Sergeant Laureline (Cara Delevingne) to a dangerous mission that may be related to the Alpha situation.  Only by following their own rules can they hope to stay ahead of the approaching danger.

I enjoyed this movie quite a bit.  The action combined with the visual effects was a feast for the eyes.  It may be likened to familiar video games, but that’s part of the charm that attracted me.  Centuries in the future allows for some great technological advancements.  Combine that with alien knowledge and you just get a nice ride to Asgard.  We never see that world, but we see others that are equally interesting.  Alpha is a world unto itself.  A hodgepodge of multiple alien civilizations that are applied to a former Earth space station.  The movie doesn’t just build the world with the environment.  It builds it with strange and entertaining characters.  Something Luc Besson is pretty good at creating.  I particularly loved the three aliens that shared a brain and provided info for the right price.  They reminded me of Quark, the Ferengi from Star Trek: Deep Space Nine, except more lovable.

A big part of this movie that I loved was the music.  It felt very 80’s science fiction. I was not surprised to find out the movie was scored by one of my favorite composers, Alexandre Desplat.  There were moments that felt elevated emotionally by his sweeping interludes.  He also gave the action scenes more dimension.  He is one of the greats.

One of the problems I did have with the movie was the acting.  I wasn’t sold on Dane DeHaan at all.  His performance was monotone and lacked the proper emotional response in most scenes.  Cara Delevingne was somewhat better than her co-star.  She reminded me of a cross between Kirstie Alley and Meg Foster.  The struggle was I think a combination of bad direction and terrible read of the script.  I can’t really blame her entirely for that because both characters seemed to fit the movie they were in.  Emotional resonance was just missing from a lot of the movie.  I was invested near the end though and that’s what counts.

The story is the driving factor in any movie.  If the script can convey a good story, the acting only needs to be decent.  We all want everything to be aces, but when parts are lacking you hope the story and the overall execution can get you through to those closing credits.  The movie has a story that is comparable to a video game.  It might not tread new ground, but it does make it fun.  I also know I saw things visually that were familiar, but had a fresh and vibrant spin to them.  The visuals compliment the action so well that you wished Jupiter Ascending had done better.  Bad editing does not a good story make.  I felt the story here took off in the first act and proceeded to become more engaging as we journeyed further into Alpha.  I might have seen where the movie was going, but at that point, I was hooked and looked forward to the adventure that awaited.

I’ve been asked how this compares to The Fifth Element.  It’s in the future, has lots of aliens interacting with humans, quirky moments, and a deadly countdown.  The comparisons stop there because it’s a completely different kind of movie.  It’s lighter in tone, Chris Tucker notwithstanding, and doesn’t have nearly as much of an emotional impact as that ending with Milla Jovovich and Bruce Willis.  Still, it intrigues me enough to want to learn more about Alpha and go on more missions with Valerian and Laureline.

Valerian and the City of a Thousand Planets is a fun movie with moments of visual lunacy brushed up against great action in an alien world.  The music is brilliant and I enjoyed the comedic moments more than I should have.  The acting isn’t noteworthy, but the banter between Dehaan and Delevingne works.  I also found the scenes with Rihanna and Ethan Hawke delightful.  Clive Owen has done so many of these types of roles, the confident and take-charge kind of guy, his performance is now second nature to him.  Although there is some melodrama to look out for.

If I had to give my love of this movie a proper explanation, I’d need to bring up the Star Wars prequels.  Those movies have great visual effects and music, but they have terrible acting, an insufferable script, and they betray the legacy of the characters we’ve grown up loving.  Now if the prequels were just their own movies and not tied to any previous films, I might be more complimentary toward them.  I see Valerian this way.  I don’t find the script that good, and several scenes make me grimace, but I also have no expectations for these characters or their outcome.  I am unencumbered by any preset standards or prior storylines.  I can enjoy the adventure and all the craziness that comes with it.  If you can do the same, you will have a fantastic time at the cinema.

Valerian and the City of a Thousand Planets: [yasr_overall_rating size=”large”]

About Valerian and the City of a Thousand Planets

Synopsis: A dark force threatens Alpha, a vast metropolis and home to species from a thousand planets. Special operatives Valerian and Laureline must race to identify the marauding menace and safeguard not just Alpha, but the future of the universe.