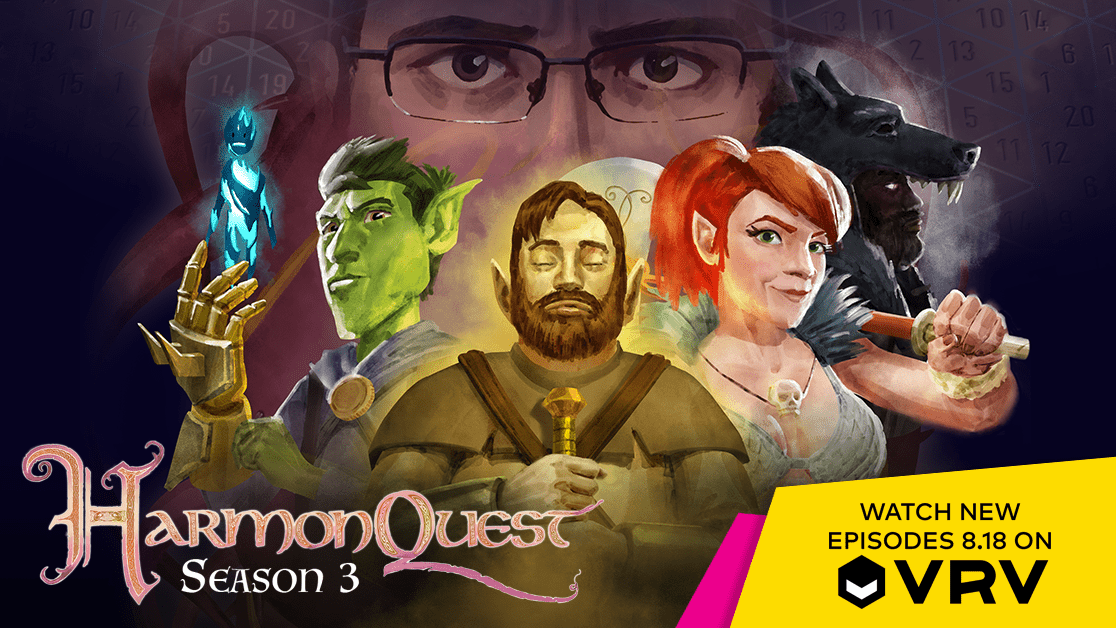 VRV, the fandom-focused video platform, is announcing that “HarmonQuest” season 3 will premiere Sunday, August 18. New episodes will air every Sunday exclusively on VRV, and the new season will run for a total of 10 episodes.

“HarmonQuest” is a comedy series created by Dan Harmon and Spencer Crittenden that follows a colorful cast of characters through a fantasy roleplaying game with a live audience. The show is part animation, part live-action, and all fun as comedians Erin McGathy and Jeff B. Davis, along with game master Crittenden, Dan Harmon, and a special guest complete a new Pathfinder adventure each episode.

“We had a blast filming this new season, and we have an awesome lineup of special guests who decided to quest with us,” said Dan Harmon, executive producer “HarmonQuest.” “I’m sure everyone is also very concerned about the future of Fondue, so fans will have to tune in to the premiere to find out what comes next!”

“Fans should get ready to travel with us through time and space on ‘HarmonQuest’ season three,” said Spencer Crittenden, “HarmonQuest” executive producer and game master. “The difficulty class is higher, the campaign arcs are crazier and the dice rolls always kept the team on their toes.”

All seasons of “HarmonQuest” are available now exclusively on VRV.

VRV is a basecamp for all things fandom, featuring a curated selection of SVOD channels including Crunchyroll, Rooster Teeth, Boomerang, NickSplat, HIDIVE and more. VRV offers more than 80,000 episodes and 2 million minutes of streaming content.

About “HarmonQuest” Season 3:
The world has been destroyed by the demon helling! To make things worse, Fondue (Dan Harmon) is dead, and his spirit is trapped inside a sword. It’s now up to Buer (Erin McGathy), Boneweevil (Jeff B. Davis), and a mysterious newcomer to find a way to undo the damage done and repair the mistakes that led to the end of the world (and were like, definitely their fault). Seeking the “Beast of Beginning” to reset their past, our heroes traverse time and space to set the world right, but run into increasingly dangerous complications caused by trying to alter the fabric of reality itself.

Russo Brothers team up with Netflix to adapt Magic: The Gathering...