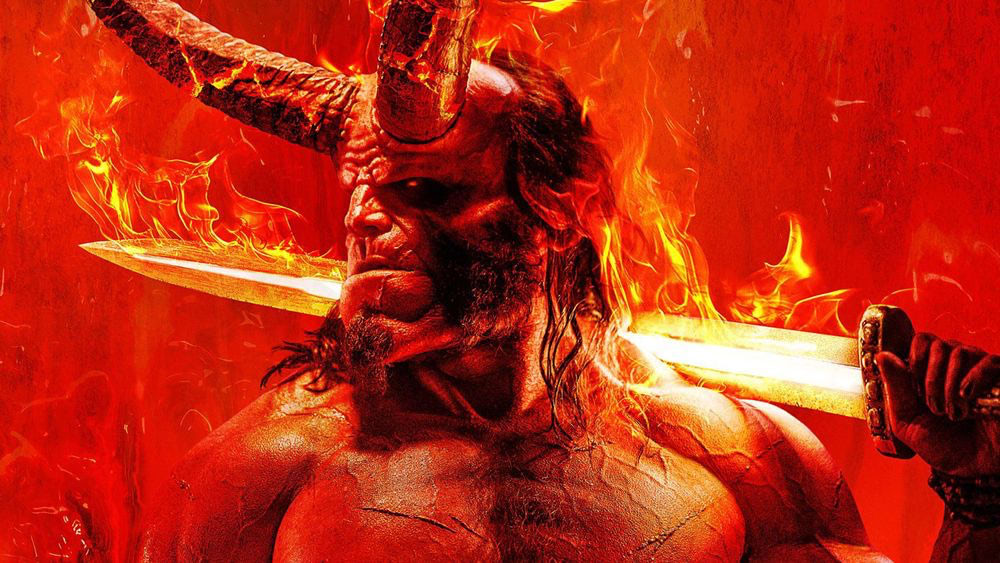 A standout? Yes, most definitely. A good movie? Well, not exactly. Don’t get me wrong, there were enjoyable moments in Hellboy. Thomas Haden Church (Sideways, Spider-Man 3), playing the popular hero Lobster Johnson in the Hellboy comic series, stole the scenes he appeared in. There’s Ian McShane (American Gods, John Wick) as Hellboy’s adoptive father, Professor Broom. He plays a more lively and sarcastic version of the character than the one portrayed by John Hurt in the original movies. Did I mention the unapologetic gore fest? Well there’s that too. With a strong R rating, the film doesn’t hold back on the blood, gore, and grotesque monsters reminiscent of Guillermo del Toro’s earlier works. This blend of paranormal and superhero genres helps the movie standout from the usual fare, and might be enough to bring you out to see it. But does it succeed in being a decent re-imagining of the popular character originally brought to life by the incomparable Ron Perlman? Or even a watchable alternative to the spandex superheroes we get month to month from DC and Marvel? Sadly, no.

Hellboy, directed by Neil Marshall (The Descent, Game of Thrones), revisits the origins of the titled character with a deeper focus on its Dark Horse Comics stories. Hellboy (David Harbour) is the adopted demon son of Professor Broom (Ian McShane) and leading paranormal investigator for the B.P.R.D. (Bureau for Paranormal Research and Defense). Discovered during an Allied raid of a Nazi occult experiment at the tail end of World War II, Hellboy was summoned from well, where else, hell. Rather than ridding of this demonic creature, Professor Broom saw potential in this demon child, adopting and training him to take on all manner of demonic and paranormal forces. David Harbour, best known for his role in the popular Netflix series, Stranger Things, doesn’t bring anything refreshing to the character other than a more grittier look than the Ron Perlman version.

The main villain, Nimue, The Blood Queen (Milla Jovovich) is an ancient sorceress
who, trying to bring about the plague onto the old world, was stopped by King Arthur and the wizard Merlin. Moving forward to the present day, with the help of a pig monster who has a grudge with Hellboy, it would appear the most reasonable thing to do is to bring back the all-powerful Blood Queen to help him seek vengeance on the slight by Hellboy. That’s not to mention the Blood Queen wants to bring about the apocalypse as well. But hey, as long as the pig monster gets even for the slight. Seems logical. Unfortunately, Milla Jovovich (Resident Evil, The Fifth Element) doesn’t bring the levity you’d desire from a ancient evil sorceress.

So old baddie gets brought back to the modern day and our heroes join forces to stop the end of the world. Seems eerily familiar (calling Guillermo del Toro). The monster designs were impressive though, including Baba Yaga, the giants, and hell demons. At the very least the movie has that going for it.

We also get introduced to new heroes who help the brooding demon child in stopping the impending apocalypse. Alice Monaghan (Sasha Lane), a medium that can communicate with the undead and Major Ben Daimio (Daniel Dae Kim) who can transform into a ferocious feline, both bring unique skills and personalities to balance out Hellboy. It’s understandable that the producers wanted the movie to standout with new characters and not rehashing the same roster from the original movies. But they’re unfortunately nowhere near as memorable as Liz Sherman and Abe Sapien.

In conclusion, Hellboy wouldn’t be so underwhelming if the gore wasn’t just used for the sake of shock value. It’s unnecessary usage and sub par dialogue drew more laughter than the forced jokes that fell flat throughout the movie. The story was uneven throughout with pacing and editing issues that constantly leaves you wondering, “What the heck just happened?”. All in all, the campiness reaches Van Helsing and Hansel & Gretel: Witch Hunters levels, and that’s not a compliment. The movie does have redeeming qualities like the monster designs and the performances of Thomas Haden Church and Ian McShane, albeit too brief. And there are two post credits scenes that kinda makes me look forward to a sequel. So I guess the movie doesn’t standout as much as I thought it would from the usual superhero fare.

Synopsis: Based on the graphic novels by Mike Mignola, Hellboy, caught between the worlds of the supernatural and human, battles an ancient sorceress bent on revenge.