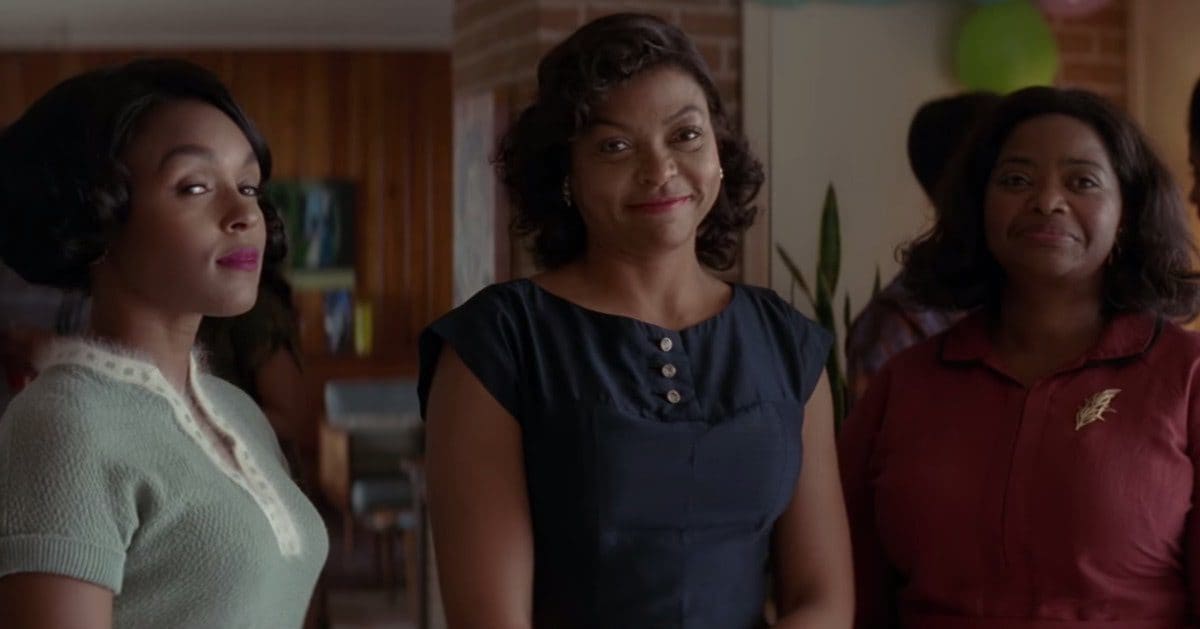 History is an important and fascinating subject.  It gives us a wealth of information and provides us with insight into our own world, helping us to understand previous mistakes and allowing us to evolve from them.  One of those mistakes is not recognizing the brilliant men and women that made some of these historical moments possible.  In our early years of education, we are taught the major figures in time, such as Paul Revere, Abraham Lincoln, Winston Churchill, and Neil Armstrong.  These are the broad brushstrokes of history.  There is only so much time in the day, which means the many people that aided these individuals along their journey towards permanent recognition are shoved aside.  The phrase, ‘It takes a village’, is appropriate here.  So unless you’ve taken a college course that focuses heavily on one of these moments, or read anything and everything under the sun, you may never know just how much these unknown heroes shaped our future.

In Hidden Figures, directed by Theodore Melfi, Katherine Johnson (Taraji P. Henson) is a gifted and talented child who is forced to attend segregated schools because of the color of her skin. In the early 1960’s, Katherine now in her 40’s, she and several other African-American women are working for N.A.S.A. as human computers, or calculators, in Virginia.  Russia is currently leading the world in the space race,  while N.A.S.A. struggles to get one man into orbit.   Katherine is reassigned to the main office of mathematicians, in the hopes her unique intellect can find a way out of this dilemma.  She is the first woman, let alone African-American woman, to ever work in this department.  Her friend Mary Jackson (Janelle Monae) is also reassigned to another department, allowing her to work on the very rockets sending astronauts into space, specifically John Glenn.  While these two face a multitude of hurdles in getting their job done, their former, unofficial supervisor Dorothy Vaughan (Octavia Spencer), is doing everything she can to make her department relevant in the face of an approaching technology that will make her employees obsolete.

The story of Hidden Figures is special in that it takes a very familiar story that’s been told before and showcases the unsung heroes.  Much has been written and filmed about the space race and the first astronauts.  Some might consider the boring aspect of space travel, data analysis, to not be as thrilling as seeing rocket ships and pictures from the moon, but I can tell you that, while all of that is visually compelling, it is as exciting to see remarkable calculations being made at break-neck speed; and knowing that those calculations are responsible for keeping the astronauts alive.  You’ve seen a glimpse of these calculations in Apollo 13 and more recently The Martian.

The film does a good job of giving us equal amounts of both their life at the office and their lives at home.  Each one of them has supportive families, but some don’t believe that a person of color could ever get an education, or receive recognition, that is comparable to their white counterparts.  The country is still segregated at this time, which means the prejudices of the white community are present in all aspects of their lives, including work.  Bathrooms and water fountains are designated specifically for colored people.  You would think that well-educated scientists would be open-minded and believe in freedom for all, but old habits die hard.  When something is the norm for so long, it takes a wake-up call to realize your shortcomings.  It’s an unjustifiable existence that is reinforced by a population too stubborn or unwilling to listen to other points of view.  An existence that unfortunately resonates even today.

The pacing of this film is very good.  It may seem to go on a little long, but for a movie that has so much story to tell you actually want it to keep going even when it’s finished.  It’s not unlike a book you can’t put down.  When the book is over, you still envision the characters and wonder how their lives developed past the last page.  I was thoroughly captivated by the performances and how they were able to convey the importance of their work.  Every struggle and every triumphant moment is so well-executed that you are invested from start to finish.

There is a healthy dose of humor in this movie that is needed to counteract the serious subject matter.  It’s almost always a natural humor that one would expect in a normal or tense situation and it makes you relate with the characters even more.

The supporting cast is a contributing element of how well this movie turned out.  You have Kevin Costner as the head of the space program, who stretches across the divide to offer his support of Katherine’s inclusion.  Katherine is immediately ostracized in her new department, especially by her coworker Paul Stafford.  Jim Parsons plays a pretty stereotypical character in Stafford and adds additional conflict to the movie that didn’t really need to be there.  Kirsten Dunst, on the other hand, plays a similar role as Vivian, the manager of both the white and colored computer departments.  Her passive aggressive personality helps remind us how an office in the sixties would operate, revealing the roadblocks intentionally created to undermine the upward mobility of colored people.  There are many other talented actors that give this movie its strong presence.

While I really enjoyed this movie, I did feel the topic of racism and prejudice was approached a little too gently at times.  It also seems to be dealt with too cleanly.  There were many scenes where it is addressed in the office and at home, but it makes you think that the issue is resolved that year and everybody just got along from then on.

Hidden Figures is one of the most important movies about African-American history, the birth of the space program, and the role women played in its continued success.  I would recommend seeing this film and also recommend schools use this film as a teaching tool.  Taraji P. Henson is a pleasure to watch.  Octavia Spencer does not disappoint and Janelle Monae provides an edge to her character’s personality that gives the film a good energy.  I also can’t say enough about Kevin Costner.  He delivers the right amount of gravitas to the scenes he’s in and the movie as a whole.

Men can be a jealous and insecure bunch, not to mention chauvinistic, so it’s no wonder that so many of them at N.A.S.A. felt threatened by ambitious, genius women who could probably take over if given the opportunity.  Katherine Johnson, Mary Jackson, and Dorothy Vaughan are not the only amazing women to help push the space program forward, but they are the most prominent and, in their pursuit of a fulfilling education and career, they have helped to inspire all of us to seek out a better life for ourselves and not be discouraged by our perceived shortcomings.