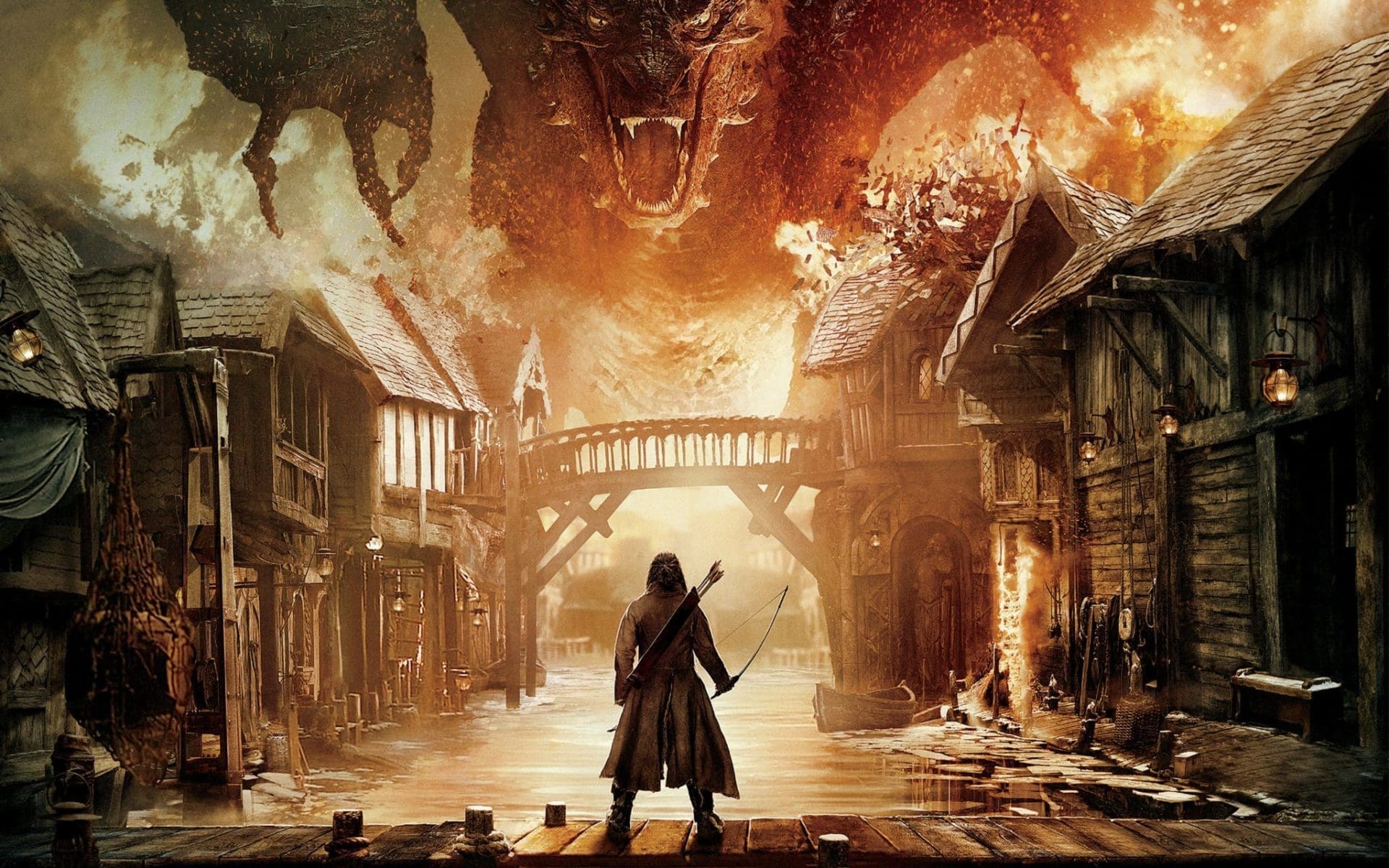 After another year of waiting, we finally get the conclusion to the impromptu trilogy of a single novel about 13 dwarves and the one hobbit tasked with retrieving a special stone hidden within the walls of The Lonely Mountain.  The only thing in their way is one very large, intelligent dragon completely at peace in his chamber of gold.  A clever distraction of words that fails, and a trap that misfires, sends Smaug (Benedict Cumberbatch) out of the mountain and towards Laketown where helpless bystanders await their fate.  Along the way of course we are met with familiar wizards and elves as well as a Bowman that may be the key to this whole adventure.  While it seems like this grand tale would warrant three movies, after seeing the story in its entirety, the original two-part idea Peter Jackson had in mind seems more appropriate.  Which isn’t to say it doesn’t deliver where it counts such as the creative fighting, enormous battle scenes, and the many Lord of the Rings references.  It does however carry a sense of earnestness and quickness to resolve everything without engaging the characters that started this journey with us from the beginning.  Namely the dwarves.

In The Hobbit: The Battle of the Five Armies, Thorin Oakenshield (Richard Armitage) and his company stand just outside The Lonely Mountain watching Smaug the Dragon rain terror and fire on Laketown as people cry out in agony.  Bard (Luke Evans), who was jailed in the previous film for aiding the dwarves, manages to escape from his cell and find his giant black arrow, the only thing that can pierce the dragon’s hide.  Much of Laketown burns as people flee by water and Bard makes for the highest point in the village that luckily hasn’t collapsed yet.  It would be silly to think this formidable dragon would have a large presence in this movie since we have much bigger battles to look forward to as the title suggest.  This realization takes some of the grandeur and fear away from Smaug’s moments.  Bard is eventually victorious and all of Laketown rejoices.  Meanwhile Thorin lays his claim to the mountain his forefathers once resided in and develops a sickness of greed and paranoia.  He shuns Laketown and refuses to honor his agreement of sharing the abundant riches the dragon had once protected.  When the elves, led by Thranduil (Lee Pace), return to The Lonely Mountain to retrieve their precious and sacred gems, Thorin barricades the entrance and any attempts at negotiation mediated by Bard or Bilbo collapse before they begin.  These decisions inevitably lead to war.

Another part of this story that is not integral to this movie, but takes up a good deal of time throughout all three films, is Gandalf’s (Ian Mckellan) journey to root out the Necromancer who we previously discover is Sauron.  Gandalf was captured by Sauron and left in a cage to be tortured and eventually killed, but is saved of course by his friends Galadriel (Cate Blanchett), Saruman (Christopher Lee), and Elrond (Hugo Weaving).  We finally get to see Elrond and Galadriel lay out some Middle Earth justice with Saruman as well and it’s quite the scene as the ringwraiths attack and regenerate out of thin air.  The ringwraiths being the nine men who were once kings and possessed rings of power, but were eventually destroyed by them.  Once the ringwraiths are dispatched and Sauron dealt with, the film gives a wink to the events that lead up to the Lord of the Rings.  Completely unnecessary but entertaining nonetheless.

The films up to this point have been getting us acquainted with the thirteen dwarves, well at least most of them, and Bilbo.  With the exception of Thorin, it seems the dwarves get sidelined throughout the movie.  Very few lines exchanged and once the actual battle between the five armies,  which are the goblins(orcs), wargs, elves, dwarves, and men, begin, their contribution is muted in the parade of CGI.  No clever dialogue or entertaining, heartwarming battle moments that we looked forward to in Lord of the Rings between Legolas and Gimli or Merry and Pippin among several others.  Just non-stop fights with characters we barely get to know.  This movie is more or less Bard’s story.

The transformation of Thorin from stern leader to obsessive warmonger is immediate and you wonder how bad things have to get before he snaps out of it.  His redemption in the movie is his fight alongside his cousin Dain Ironfoot (Billy Connolly) and also his battle with Azog the Defiler, who is commanding his armies from up high.  The fights that lead up to that moment climbing the hill to Azog become very acrobatic and it never does seem to faze our agile heroes, especially Legolas who always knows where to step.

I recommend The Hobbit: The Battle of the Five Armies for the epic conclusion it offers and some top-notch battle scenes.  The emotional core that elevated Lord of the Rings is sadly lacking and when certain deaths occur that you should be invested in but aren’t, you’re left wondering if our characters couldn’t have found a better way to resolve this situation.  Knocking out Thorin perhaps before he angered the elves and men to the point of attacking The Lonely Mountain.  Although if he wasn’t plagued with paranoid delusions, he wouldn’t have had the foresight to summon Dain’s army, who provided the much-needed assistance against the orcs, goblins, dwarves, and trolls.  Also I would have appreciated more banter with many of the characters we spent three movies getting to know.  The movie is designed to bookend The Fellowship of the Ring and it succeeds in that regard, despite the bloated subplots.  So now what we have is a six-movie story that extends from Bilbo’s tales to Frodo’s.  Middle Earth never looked so amazing.

The Hobbit: The Battle of the Five Armies:[usr 3.5]

About The Hobbit: The Battle of the Five Armies

Synopsis: Bilbo and Company are forced to engage in a war against an array of combatants and keep the terrifying Smaug from acquiring a kingdom of treasure and obliterating all of Middle-Earth.