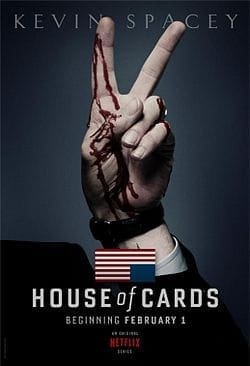 “If we hit that bullseye, the rest of the dominoes should fall like a house of cards. Checkmate.” House of Cards is Netflix’s bullseye. The producers and Netflix itself took a huge gamble with the show and I hope it works out because I can’t wait for new Arrested Development and hope it equates to more. If you’re not familiar with Netflix’s House of Cards it is their first original series. It is a political drama about a politician, played by Kevin Spacey, who is sneakily trying to move his way up in Washington by influencing people and policies. The first season is thirteen episodes long and it gained notoriety when Netflix announced they would release all thirteen episodes at once, as opposed to normal television programs that are released on a weekly basis. This is a great idea because if you’re like me (I have no problem saying that I like to wait for shows to be off the air before watching them) then binge watching shows is right up your alley.

The first two episodes were directed by David Fincher, who also executive produces, and they set the stage and mood for the rest of the season. The rest of the episodes are helmed by different directors, including Joel Schumacher, and while they each bring their own style to it, they all follow Fincher’s lead and visual style. The visuals are all very desaturated and almost give a vibe of coldness that convey that these characters don’t really care and only motivated by their own ambitions, which, when you’re a politician you should be motivated by the people you represent, but we all know that doesn’t always happen.

House of Cards doesn’t exactly run along the line of a traditional political drama. There isn’t a lot of what I would call corruption. The characters aren’t so much corrupt as they are manipulative, which I guess could be considered corruption. Normally I expect some sort of dead body to present itself, usually as the start of events, or the outcome of the events in the movie, no such bodies present themselves in such a way that make it a crutch, yet.

The story line is very dense and drawn out so it requires a lot of attention to detail on the viewer’s part, especially toward the last episodes when the proverbial house of cards starts falling. There are many characters that interact with each other in different, interesting facets and never just because there was time to fill. The most interesting relationship is between Kevin Spacey and Robin Wright. They are married and their relationship is interesting because they seem to love each other. Crazy, right? This is quite a detour from the normal, cold, we hate each other, back stabbing relationships that are part of most political dramas. Don’t get me wrong, they still have extra-marital relationships, but they tell each other like it was just part of their day.

There were two stand out portions of the show that I think will help set it apart from others. The first is pretty significant in the way the story is told. Spacey’s character often breaks the fourth wall (actors talking to the audience for the uninitiated) in inner/outer monologue giving insight into why his character is doing things, you can see an example of it in the trailer below. These are often light-hearted and once or twice it actually interrupted the flow of the moment and became distracting, but overall I enjoyed them. The other is only a minor aspect that doesn’t appear too much and as the show progressed they reverted back to traditional styles. Whenever a character would get a text message, instead of cutting away to the phone, the message would appear on screen in a caption bubble near the phone, but as I said as the show progressed they reverted to just showing the actual message on the phone. It’s not anything to write home about I just thought it was something new and interesting.

The first season is constructed like a house of cards, the first half deals with setting it all up and as it progressed it began to slowly fall. Overall the story is very interesting and there was enough there to keep your attention. Netflix originally ordered twenty-six episodes so I look forward to the next thirteen as the first season ended on a cliff hanger just as the cards began to topple. House of Cards definitely will be giving HBO and similar networks a run for their money. I don’t know how Netflix will measure the success of the show, but I hope it succeeds because I would like to see more original programming from them.

Synopsis: Francis Underwood is Majority Whip. He has his hands on every secret in politics – and is willing to betray them all to become President.