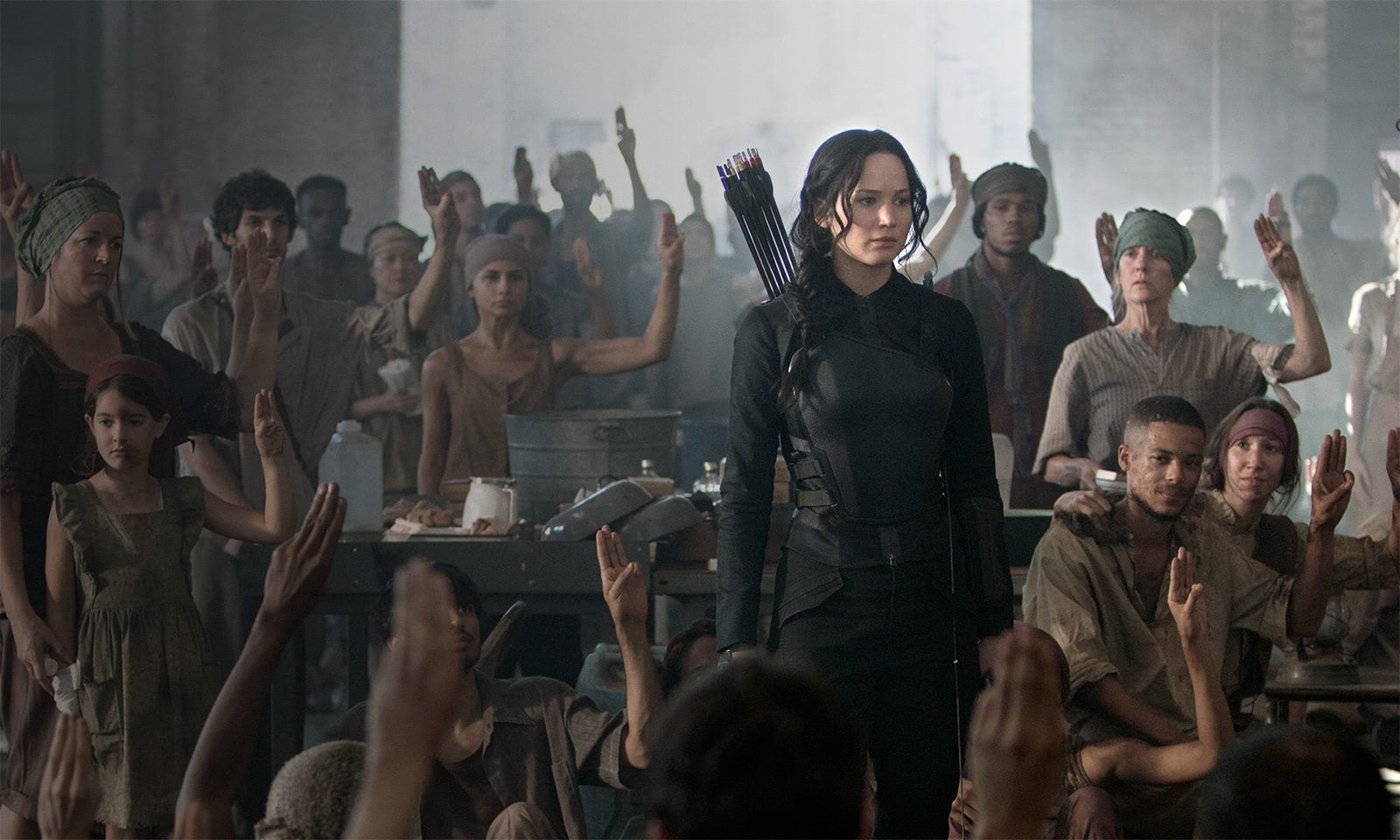 One of the most anticipated movies of this holiday season, The Hunger Games: Mockingjay – Part 1 plots the continued journey of Katniss Everdeen and the Rebels as they battle against President Snow and his Peacekeepers in District 1 to gain freedom for the people of Panem. This film is the first half of the third book in Suzanne Collin’s The Hunger Games trilogy. As with anything Hollywood, the final book has been split into two blockbusters because money; the critics murmured over social media for the past 18 months about that decision, but Part 1 demonstrated that while two films lengthens the narrative exponentially it wasn’t necessarily a bad thing.

Mockingjay – Part 1 picked up relatively quickly after the big reveal at the end of the second film (and for the supposedly small percentage of the population who’ve not read these books, I’ll try to not spoil anything), and the casting of Julianne Moore as Alma Coin was genius. She played well against Philip Seymour Hoffman to whom the film was dedicated, and the psychological manipulation these two characters build through the film is the cohesive element that made this Francis Lawrence directed film a story that can easily stand alone.

This is a darker, grittier Mockingjay as the rebels attempt to convince Katniss “to be their Mockingjay” –a symbol of hope against the totalitarian rule. She eventually acquiesces through manipulative anger and launches a propaganda program against The Capitol all the while trying to find a way to rescue Peeta, who’d been captured at the end of Catching Fire, from Snow’s clutches.

The film is gargantuan in scope and hype, but I couldn’t help wonder if it’s too big. There were times my mind and eyes wander away from the screen while I waited for Julianne Moore to strategize or for Lawrence to agree to those strategies. Jennifer Lawrence is a celebrity’s celebrity and as I watched her on this film I was struck by how ambivalently she played Katniss, but then I recalled that Collins wrote her as an anti-hero in the books. She is continuously forced into her role by Snow, Coin, and the others, albeit given the chance she would’ve surely disappeared into a quiet wood life. That ennui was too clearly drawn in this chapter as the filmmakers tackle what some critics argue is the weakest of the books. Nothing really happens in this film in terms of action. I don’t even recall Katniss firing more than an arrow or two. And the dystopian setting could’ve easily been any of a dozen other films and television shows I watched in the height of 1980’s Cold War pop culture, and this film lacked the glossy graphics of the game itself that added to the dimensions of the first two films.

As for the secondary characters, Hoffman’s role could have easily been more affective although at the very end the filmmakers hint at his importance to Mockingjay – Part 2 that won’t be released until 2015. Woody Harrleson’s Haymitch is added almost as an after thought in this film as a now sober, lame counsel who wasn’t on screen for more than a few minutes. As for Elizabeth Banks’ Effie Trinket who had been sequestered away in District 13, Hoffman rouses her to become Katniss’ cheerleader. She and Sam Claflin’s Finnick Odair make the most of the bad situation through a few subtly well acted scenes with Katniss and crew.

I’ve never been convinced of this whole love triangle between Peeta, Katniss, and Gale, and these relationships make me gag, but I didn’t hate Gale (Liam Hemsworth) in this film. Having read the books, I know how these relationships end, and I have always respected how Collins wrote Gale’s outcome. In the film, the relationship he has with Katniss feels solid and real, absolutely unlike how her relationship Peeta feels because Jennifer Lawrence and Josh Hutcherson have no real on-screen chemistry.

The Hunger Games: Mockingjay Part – 1 has been hyped across America just like the Rebels Propaganda Vids are hyped across Panem in the film. Millions of dollars will be spent on midnight showings and opening weekend, and revolts will continue to occur in places like District 2. The film feels balanced and stands alone with a clear conclusion, although less indecisiveness and more action would’ve made for a more exciting third film in this world-wide phenomenon.

About The Hunger Games: Mockingjay – Part 1

Synopsis: The third film based off of Suzanne Collin’s The Hunger Games trilogy finds Katniss hiding out in District 13 as the rebels try to incite a revolution all the while rescuing Peeta from the clutches of President Snow in The Capitol.