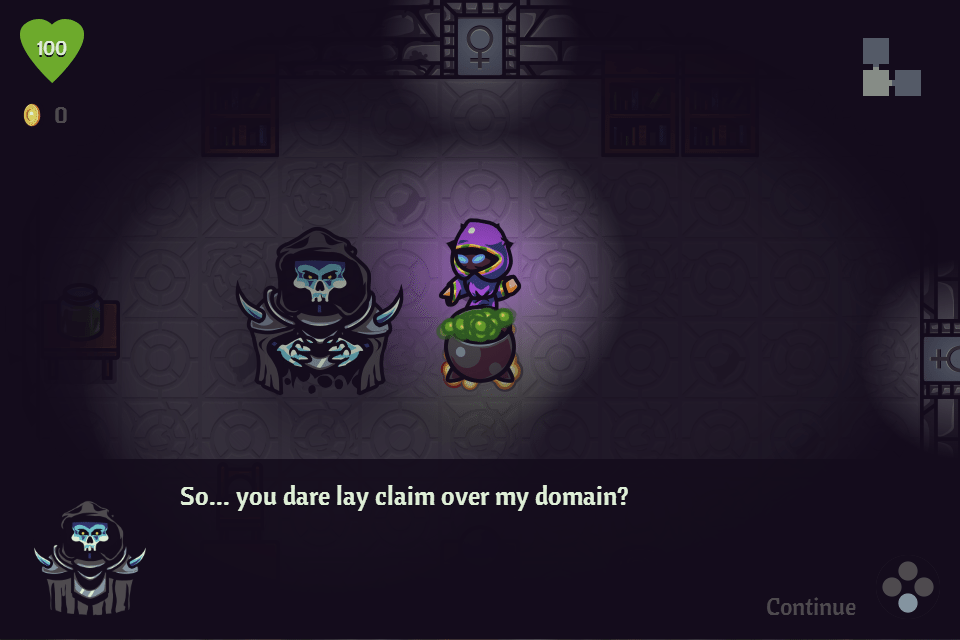 A Wizard’s Lizard is a rogue-like, inspired by The Legend of Zelda, Gauntlet, and The Binding of Isaac. You control the eponymous lizard through a procedurally-generated dungeon to try to rescue your wizard from death. Each time your character dies, you are put back in town and a new dungeon is created. Some of the items you collect follow you back, but for the most part you start fresh each time.

A Wizard’s Lizard is a rogue-like dungeon crawler that has you navigating a maze of rooms in an effort to save your wizard friend from Death. It may call itself an action RPG in the vein of The Legend of Zelda, but it’s a rogue-like. When your character dies, you are set back in town and very little comes back to town with you. Over time you build up the population of the town to increase your starting funds, and you unlock blueprints that let the town blacksmith sell you better gear so you can start off more prepared as time goes on.

The gameplay is simple and satisfying. Enemies make a satisfying pop on defeat, the screen shakes give appropriate response to player actions, you can feel the time they spent polishing this game. The game is fun to play, and easy to pick up and put down for shorter play sessions. An average run takes anywhere from 15 minutes to an hour, and since you generally start from the same spot every time there’s no time lost to figuring out what to do next when you come back after a break.

One of the most unique features of this game is the way it handles death. A short cut scene at the beginning of the game explains that the wizard has created a potion to cheat death, and after giving it to the lizard the two are confronted by Death, who kidnaps the wizard and vanishes. They don’t really explain exactly what effect that has on the game, but that’s what I’m here for. When you die, your character becomes something akin to a ghost. You can still run around and fight, interact with merchants and free townspeople, but the game changes quite a bit. The graphics get brighter, enemy ghosts start attacking you, and you become immune to attacks like poison. This buffer takes some of the edge off the game, you aren’t really vulnerable unless you are already dead. There is one special room in each dungeon that has a pentagram inscribed on the floor that will resurrect you one time, so you can switch back and forth between modes.

Unfortunately, the game tries to force this on you at times. There is a set of treasure chests, each surrounded by blocks that you can only pass through in a certain state, that give you a very nice item at the end of the chain. Since you only resurrect with half health, and the item you get for it more of a convenience, killing yourself on purpose to get the items is of questionable worth. Since that’s really the only time that there is any incentive to be dead, it feels a bit heavy-handed.

If you want to play this game to completion, you are going to go on quite a few dungeon runs. Since the gameplay is so simple, after a few of these runs it starts to get very repetitive. There are no special items to use, and while the different weapons have some subtleties required to use them most effectively, for the most part its just running in circles holding down the attack stick in the direction you want to fire. There seems to be an inordinately high number of mobs at times as well, with zombies being the biggest offender. They don’t really pose a threat, but they take two hits each from the default weapon, and there can be upwards of 30 on-screen at a time (more if you are dead). This usually equates to lots of mindless shooting while running in wide circles.

The gameplay is pretty simple: you move around and you attack. The standard setup is to use WSAD to move around and the arrow keys to attack, though I recommend a gamepad as it offers a greater degree of fidelity on both accounts. Outside of that there’s not a whole lot to interact with. The menus are simple and easy to understand, interacting with merchants and the various statues is easy and intuitive, and movement is fluid and responsive. For the most part I had no trouble, though the exploding spear is much too dangerous to be of any real use due to the sensitivity of the joystick used for attacking. There are a few glitches that let you fire through certain walls, and fighting near the doors can be a bit obnoxious, as it’s very easy to accidentally enter them.

The down side to all of this, which as you’ll see is somewhat of a theme with this game, is that there just isn’t enough. When you acquire new equipment for the first time, it tells you the name of what you just picked up. If you want to read the description, you will have to wait until you die and go read it from the item stand in town. The second time you get that item, you don’t even get a name. The descriptions are good as flavor text, but don’t really tell you what the item does. It’s nice that one of the items gives you a magical barrier, but I didn’t notice any actual effect from it, and I still have no idea what the difference is between the lead and iron sets of armor. This game doesn’t really explain anything to you, so it’s up to you to figure out how to resurrect yourself after you die, or that certain blocks are only there when you are dead. None of it is too difficult to figure out, but be prepared to experiment.

The game’s visual match the genre perfectly. The game looks like a top-down action game pulled straight out the 16-bit era and given a modern polish. Most of the graphics look to be drawn with vector graphics reminiscent of Dan Paladin’s work on games like Alien Hominid and Castle Crashers. The visuals come together really well to deliver the setting and mood of the game. When you are alive, the game is more dangerous, and the visuals reflect this. Dark backgrounds and flickering lights do a wonderful job of making you feel on edge. Many times I would wander into monsters that I didn’t see because I wasn’t looking close enough. There is no way to adjust the brightness, and at times it can be a bit too dark, but for the most part it’s spot on. When you are dead, things are a bit less scary. Sure there are more enemies to deal with, but they tend to do less damage and some of the most perilous threats are neutralized. The graphics reflect this by brightening things up substantially, making it much easier to see the enemies, look for secrets or just get around in general. There a few things that don’t line up correctly though, mostly with the colored lights. There is an upgrade that causes you to glow with a dim blue light, but when you are dead it doesn’t blend right and ends up turning everything around you solid blue.

While the visuals that are there look fantastic, the visual variety is a bit lacking. On low-budget games like this, I don’t expect hundreds of different enemies, and the game features a decent variety of monsters, items, and the like. That being said, when you are facing down 30 or so zombies that all look identical, the lack of variety really hits home. One of the best features of having procedurally generated dungeons is the fact that you can play through a hundred times and always get a different dungeon, but only having about 40 different monsters in total, including the palette swaps, diminishes that. Attack animations suffer the same fate, with most monster attacks and projectile hazards represented as colored circle. Don’t get me wrong, the game is very pretty, and the visuals are an absolute treat the first few runs, but for as many times as you will likely run through these dungeons, a little variety would go a long way here.

The score for this game is very reminiscent of the 16-bit action RPGs that this game draws its inspiration from. The melodies playing in the background do a good job setting the mood for each area, with soft woodwind and xylophone sections for towns and shops, nice orchestral arrangements for the dungeons, and more brassy sections for the bosses. Much like the graphics take the 16-bit and modernize it, the music doesn’t have that chiptune sound. The songs sound like they were recorded with real instruments, and it really matches the visuals well. For the most part the sound effects are of the same quality, with crisp and satisfying sound effects for the monsters and the player attacks. There are a few bugs where the audio doesn’t match up, for example after you kill a boss if you go back into his room the boss music starts up again. While the audio runs into the same problem that the visuals have when it come to variety, there is a bigger issue with the audio, and that’s balance.

The music is nice and pretty, and while it does get old after a while, that time takes longer than it probably should because you won’t be able to hear it most of the time. The game favors attack spamming, and the sound effects are much louder than the music. While there may only be a few minutes of music in total playing on loop, the two different sound effects used when you throw a dagger get old much quicker, and unfortunately along with the various grunts and booms, drown out the music almost entirely. There is no way to adjust the volume independently within the game, so much of that beautiful score is simply lost . Another quirk that, while not exactly detrimental, is just enough out-of-place that you can’t help but notice, is the fact that there are several locations that are completely devoid of music. It doesn’t help that these are also the places that you are least likely to hear any sort of sound effect. Dropping from nonstop whooshes and booms and music to pure silence definitely gets your attention.

I love seeing little studios like this make a game with such a high level of polish, but the game falls flat in a lot of ways. The game is very repetitive and collecting all of the upgrades turns into quite a grind after a very short amount of time. At $15 the price is somewhat high for the amount of time you will get out of it, and unless you love rogue-likes, you will likely give up on it before seeing it through to completion. If you are a fan of the genre, it is very much worth the money, but if you haven’t played a rogue-like before, or only have a passing interest in them, you might want to skip this one. If you are interested, you can find more information and purchase the game from the developer’s website, http://www.wizardslizard.com/