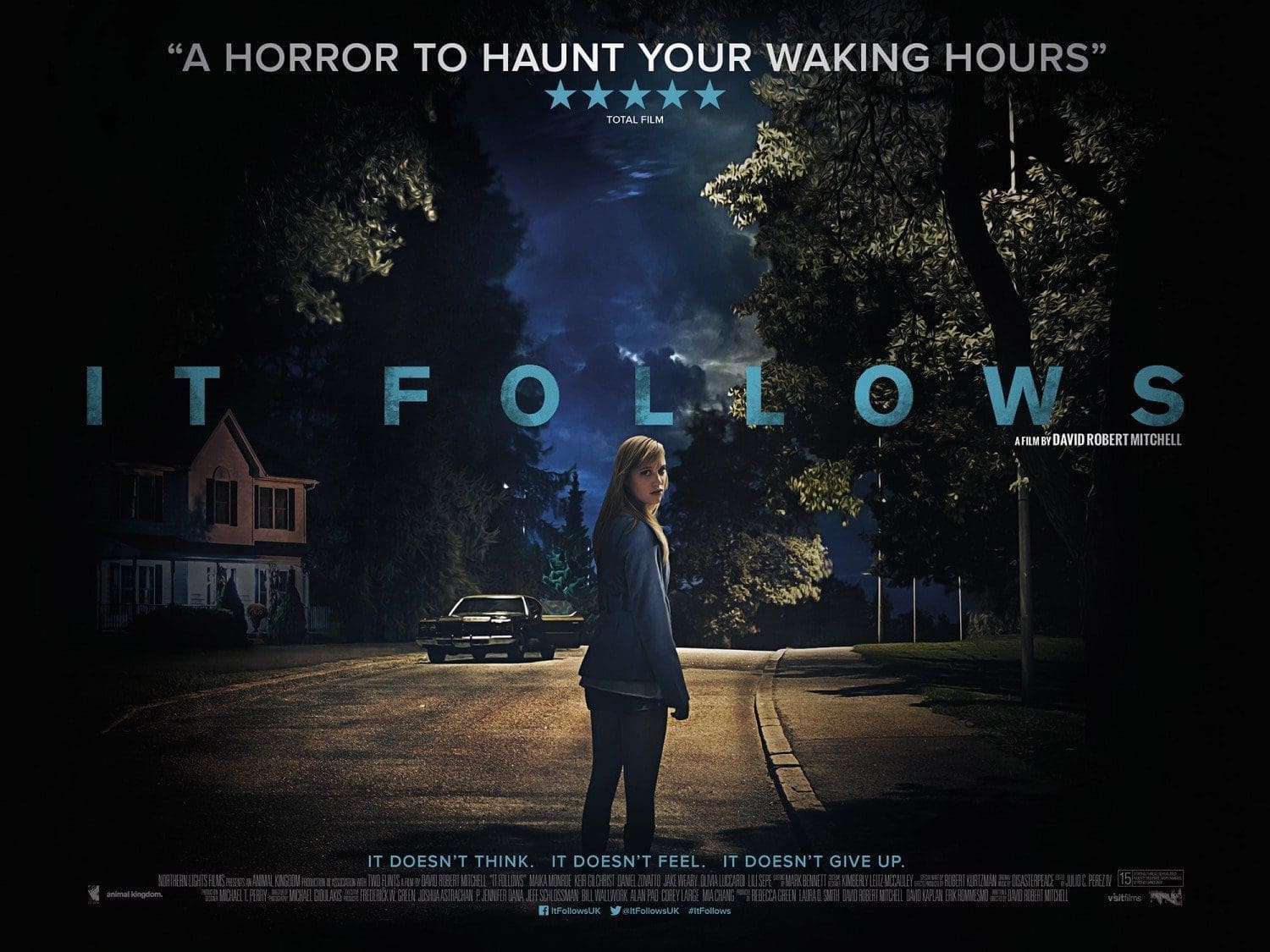 Horror movies have always been more miss than hit.  Plenty of them offer the cheap thrills of gore and mayhem, which you expect to a certain degree; but often you’re left feeling empty about the whole experience.  You neither care about the plot or the fate of the main character, who is usually female.  The key I find to a really good horror film, besides a good story, is much the same as if you are making a thriller.  You need a creepy atmosphere.  Create a terrifying figure and place it in a setting surrounded by eerie and offputting music.  The music helps builds tension and suspense in this atmosphere.  The setting has to be comfortable for the audience, but in the back of our minds we know a lingering threat looms nearby.  So I was very happy with how this movie turned out in that regard.

In It Follows, directed by David Robert Mitchell, Jay(Maika Monroe) is dating a boy from another high school and decides it’s the right time to consummate their relationship.  They drive to a quiet lot by an abandoned building and have intercourse one night.  Jay is content afterwards and is unaware that her boyfriend is behind her.  He knocks her out and ties her to a chair.  He then begins to explain that he is cursed by something that follows him everywhere he goes and if he stops too long it will kill him.  The only way to make this entity stop is to have it follow someone else and this requires him to sleep with someone.  Once you have sex, the scent or disease is transferred to that person.  If that person dies, the entity goes after the previous infected person.  We don’t know how many people have been infected, but he decides this is now Jay’s problem.  He warns her the entity will look like anyone, even family or friends.  It doesn’t stop walking and it never sleeps.  If you see it coming for you, just run away and hope you have time to rest before you have to do it all over again.

The best thing the director decided to do to help this movie is place it in the late 70’s or early 80’s time period.  There are no cell phones, no video cameras, and no social media.  The isolation in this movie, set in the Detroit area, amplifies the tension even further.  The fact nobody can see the incoming entity approaching, except the infected, is also an unnerving pleasure.  Jay witnesses this entity, always a person, approach her the first night and luckily she is able to get away.  Now she can’t trust anyone, but still relies on her closest friends to see her through each day.

I was intrigued by the use of the music.  Much like the choice to go with an early 80’s horror theme, the music invoked eerie, slow moments of terror.  Similar to how the music was used in Henry Potrait of a Serial Killer.   The music, combined with the camera shots of driving down empty roads and seeing people oblivious to the danger lurking next to them, kept me engaged.

Rather than increasing the adrenaline of the audience by adding quick edits of escaping an attack just in the nick of time, which does still happen, the scariest scenes come from the quiet moments when everybody is relaxing and some person in the distance is right there in plain sight.  Getting closer and closer until it’s almost too late.  The entity is constantly changing its identity so it can catch you off-guard.  One minute it will be your best friend and the next a random stranger with huge muscles.  Jay becomes desperate enough that she even begins sleeping with people in the attempt to have some breathing room before her next encounter.  Of course if you don’t tell someone they are in danger, they aren’t nearly as prepared for what’s to come.  Even if you do tell them, in all likelihood they won’t believe you anyway.  Damned if you do, damned if you don’t.

It Follows does drag a little and the characters are a little uninteresting, but the story is strong and there is always a constant foreboding that stays with you even after the movie ends.  I enjoyed this movie very much and all the little nods to creepy horror movies of the seventies and eighties.  Right down to Jay’s friends, who just seemed to be there for Jay and never became melodramatic or emotional about the whole situation.  They supported her as if she was just having another bad day, even her friend Paul, who really wants to be her boyfriend and is jealous she didn’t offer to share her disease with him instead of Greg.  Hormones make kids do crazy things.  This makes a good PSA on the use of condoms.

It Follows stands out among the usual action-packed horror films.  It’s not boring or disgusting and it doesn’t kill off characters unless it supports the story.  I’m not sure if modern audiences still appreciate this form of horror, but I’m enthusiastic the genre has more great company.

Synopsis: After a young girl gets involved in a sexual confrontation, she is followed by an unknown force.