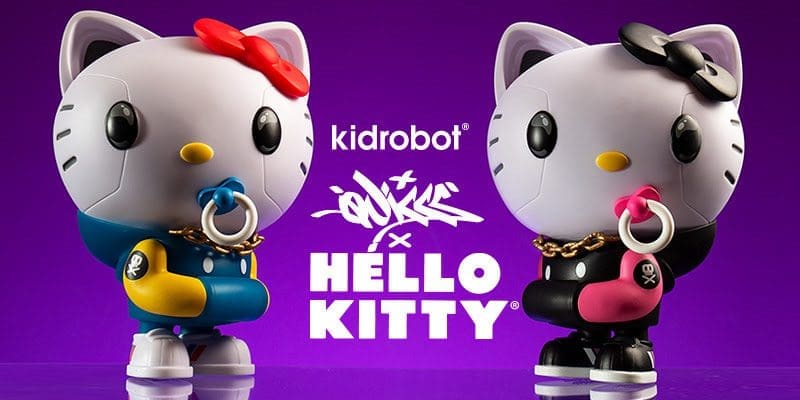 Kidrobot, the world’s premier designer and online retailer of limited-edition art toys and apparel, today announced the release of an all new art toy in collaboration with Sanrio and Filipino artist, Quiccs.

Continuing the Kidrobot x Sanrio capsule, Kidrobot brings a new artistic twist to the global pop icon Hello Kitty. Quiccs Maiquez won the 2018 Artist of the Year Award at the Designer Toy Awards, and Kidrobot is honored to work with him to bring street art appeal to the cuteness of Hello Kitty.

The figure stands at 8” tall with Kidrobot’s signature high-quality vinyl and features Quicc’s BulletPunk design with modern streetwear complete with Hello Kitty’s iconic red bow. The concept first came to Quiccs when he imagined a girl living in a dystopian robot universe, unearthing artifacts from past civilizations. The figure is available from Kidrobot in two colorways along with other collectible variants from Kidrobot retail partners IamRetro and Polyphony.

Quiccs is an illustrator, toy designer, and graffiti artist. His style is deeply rooted in his love for the Japanese robot culture and hip-hop influences since his childhood days. Quiccs launched a line of original and custom designer toys under the brand Hidden Fortress in 2012 and continues to create them as an independent toy producer. He has collaborated with designer toy brands from around the world such as Flabslab from Singapore, Kidrobot from the USA, and Devil Toys from Hong Kong to create resin, vinyl, and action figures based on his original characters such as “The Ghost of Kurosawa”, “Sharko & Remi”, and his flagship character, “TEQ63”.Quiccs currently co-owns the commercial design firm Burnwater Design Studios. He also represents the international graffiti crews “Zinc Nite Crew”, “Three Flare Krew”, and the Filipino local artist collective “Pilipinas Street Plan”.