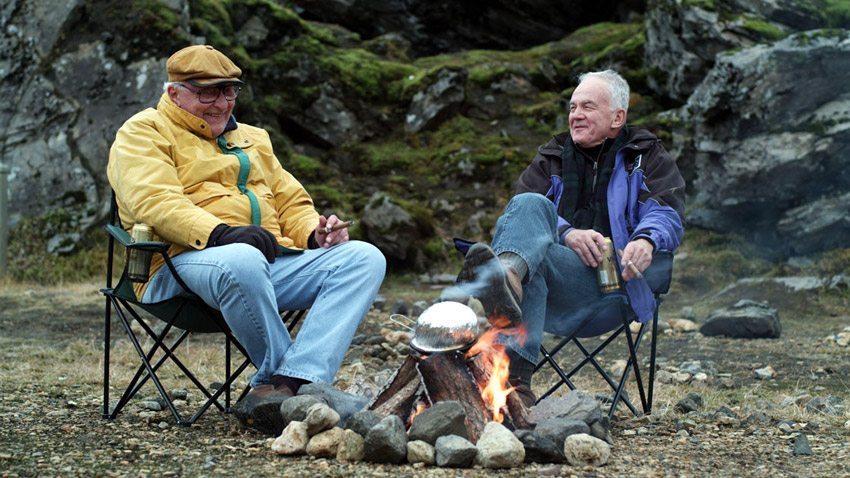 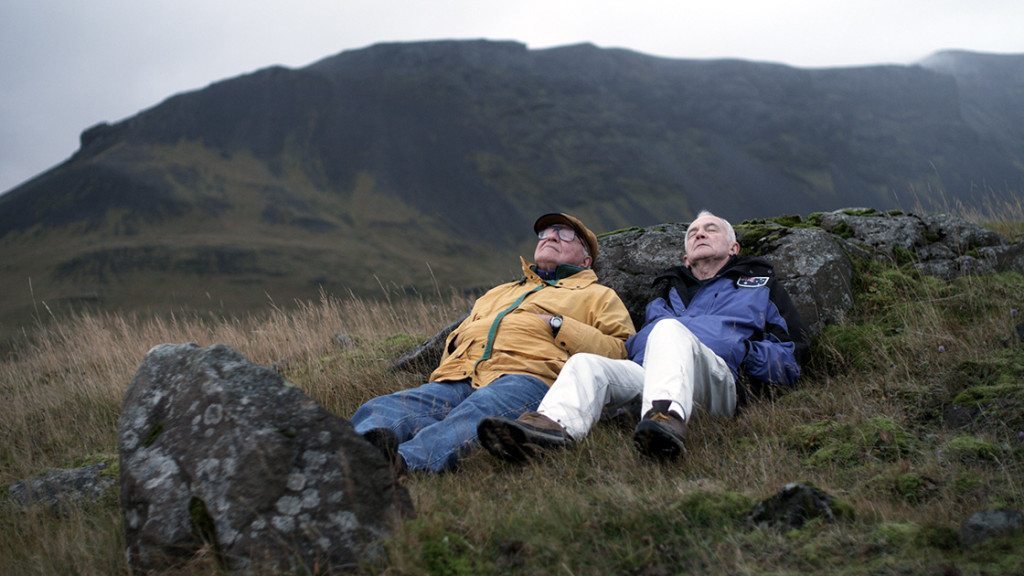 A quiet character study turned road trip film, Land Ho! juxtaposes the loud-mouthed Mitch (Earl Lynn Nelson) with his quieter, more reflective ex-brother-in-law Colin (Peter Eenhoorn) as the two sexagenarians embark on the ultimate adventure to grasp for what they believe would be one last hurrah. Writing/directing team of Aaron Katz and Martha Stephens set the film in the gorgeous environs around Reykjavik, Iceland appealing to an audience that enjoys sweeping natural beauty. The subtle exposition begins stateside as Colin visits Mitch in what seems to be his rural, retirement bachelor pad. Nelson plays Mitch as a hypersexualized, horndog who compares everything to the female anatomy. Long divorced from one of the sisters who linked the men, Mitch reveals early in the film that he has purchased two first class plane tickets to Iceland and assures a stoic Colin that, as a doctor, he can afford the entire two week trip for both men. Supposedly, this journey is to help Colin get over the loss of wife #2 who recently left him for another man (having already lost the other sister to an earlier death).

Off they go to Iceland where the cinematography and photography are breathtaking. While the narrative at this point is relatively simple as a road trip between friends with some sort of reveal towards the end, it leaves the audience wanting. We expect something drastic or cinematic to happen, but this isn’t that. This is a small, art film between two men. Their genuine friendship is impressively demonstrated through subtle scenes; like when the men share a bed one evening. Mitch crawls into bed with his dead weight over Colin demonstrating to the audience that these two are quite comfortable being around one another.

Katz and Stephens films these two actors in a way that the audience almost feels like they’re eavesdropping from a nearby table, the back seat of an actors’ vehicle, or the next room. The intimacy of the film is enhanced through the visual blocking and camera angles, albeit at times it’s too much. In one scene on the road, the lens flare becomes distracting as it remains for a good twenty seconds of the film while an earlier scene remains intact for a good three minutes. Don’t get me wrong, the film is artistic and the acting is fantastic. Colin as the mild-mannered yin to Mitch’s yan is delicately complex, but by the film’s end, he’s found his own footing on the hills of Iceland as he embraces the next stages in a life that is far from waning. While Mitch, the impetus for this journey of discovery, is abrasively sweet, his facade crumbles in certain scenes; such as when his cousin, with who they’ve crossed paths briefly mid-travels, succumbs to too much alcohol. He cares for her and plants a sweet kiss on her forehead as he tucks her into bed. As we slouch towards the conclusion of this film, it’s revealed that the pilgrimage is much more Mitch’s than it is Colin’s even though both men find healing and hope from the trip.

But that’s where this all ends. There are some cute scenes between the men and Mitch’s cousin and her friend, then later a grand snapshot of intimacy between Colin and a fellow traveler, but there’s a certain panache missing from the film. Either it’s almost too small, or the emotional journey is just too neutral and even keeled to keep the audience gripped for the hour and a half runtime. When exploring the characterization between two men who’ve obviously known each other for several decades, we expect a crescendo of emotion that simply does not emerge, and the big reveal just isn’t that big at all. Just like the film itself.

Synopsis: A pair of former brothers-in-law embark on a road trip through Iceland.