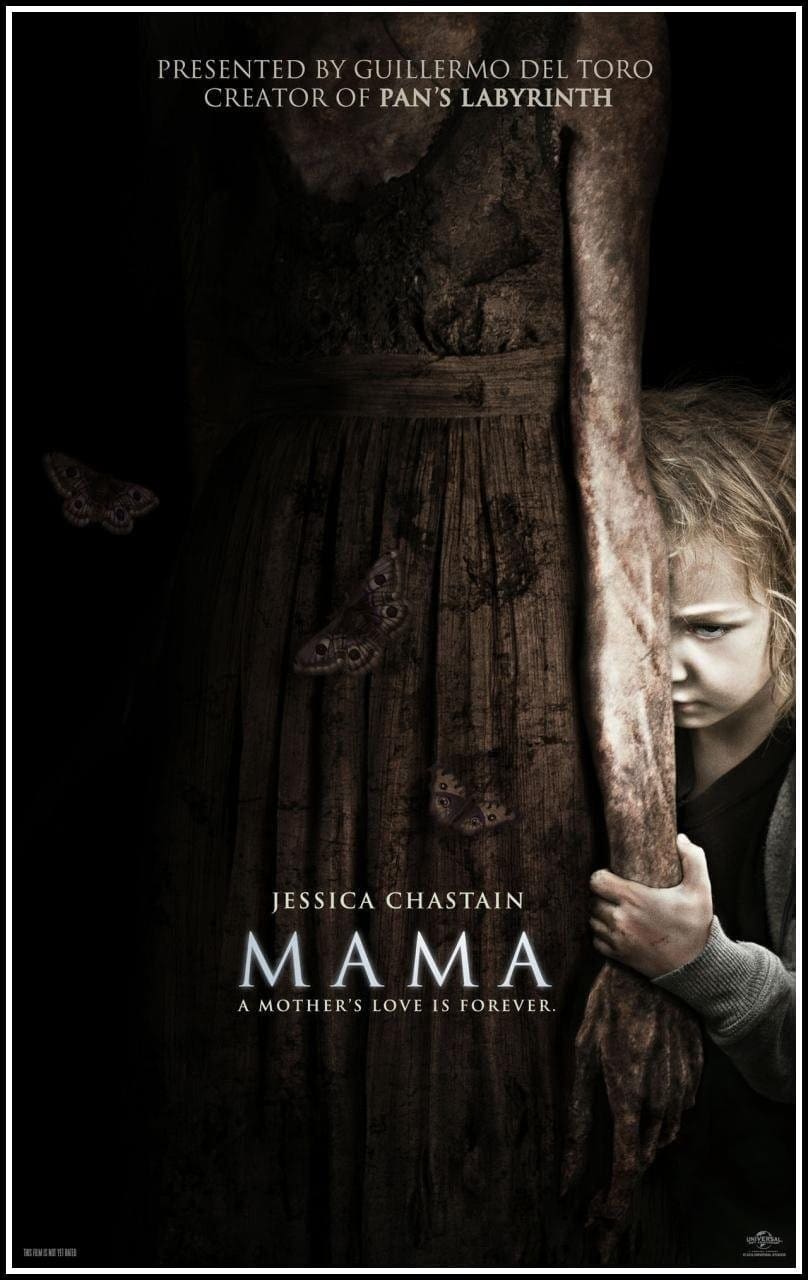 Mama is a film by Andres Muschietti, who was the writer and director of the original Spanish short film of the same name in 2008. Starring Jessica Chastain (Zero Dark Thirty), Nikolaj Coster-Waldau (Game of Thrones), Megan Charpentier (Resident Evil: Retribution), and Isabelle Nelisse. It is presented by Guillermo del Toro and releases nationwide January 18th 2013.

Mama is a tale of two young sisters, Victoria (Charpentier) and Lily (Nelisse), who are kidnapped by their father Jeffrey (Waldau) who goes on a killing spree murdering coworkers and eventually his estranged wife. His story is never really explained or resolved and is used more as a bridging to the sisters being abandoned in the woods. You are introduced early on to the protective spirit called “Mama” as she takes care of the sisters in an abandoned cabin in the woods for five years. You are also introduced to Jeffrey’s twin brother Lucas (Waldau) as he spends the next five years searching for his nieces. They are found, in feral condition, accidentally by a couple of aged trackers hired by their uncle. The sisters are rehabilitated and are left in the care of their uncle and his girlfriend Annabel (Chastain). The spirit “Mama” follows the girls and was not presented as a threatening presence to the family early on. But she grew increasingly jealous and angry as the sisters became more fond of their new parent figures. The origins of “Mama” and how she came to be is explained mostly through flashbacks and a little detective work from the sisters attending psychiatrist. Her arrival is heralded by moths whose symbolism is never really explained though they could represent the spirits nocturnal nature. And as we become more aware of her history, we understand why she is protecting the girls.

Though why most of you will be going to see this movie, through clever marketing, is the fact that Guillermo del Toro’s name is plastered on every poster and trailer for this movie. Not to discount the movie itself but understand that this is not a del Toro film. He was brought on as an Executive Producer, basically so they can use his name to market Mama. Despite the tried and true marketing campaign (trust me, the majority of people you ask will think this is a del Toro movie because I thought the same thing entering the screening), the only redeeming quality of Mama was the good tension build ups and pacing between the scares.

The movie starts off with a one line introduction “Once upon a time…”, setting the story up to be an urban legend more than just a horror movie. The twin brothers relationship is not delved into but is not consequential to the overall narrative. Though personally, they could have developed the twin brother relationship with the sisters more. There is one scene where the older sister mistaken their uncle for their father but that point was never used again in the rest of the movie. The older sister wears glasses but when she first encounters the spirit “Mama”, she did not have them on. And that device was used effectively throughout the movie. The younger sister was only a baby when she is abandoned so her development as more a feral creature through the five years is more clear than in her older sister. There are plenty of plot holes and why is it that everyone in every horror movie has to go out searching for something in the woods in the middle of the night? Let’s just say there are a couple of instances of this and it’s frustrating to watch because you know they can be more creative with these scenes. Though I do acknowledge that the use of a flash camera was done very well in one of these scenes. The acting was not fantastic by any stretch of the imagination but served its purpose.

All in all, there are plenty of good scares in the movie that take away from the utter frustration you have when watching horror movies use the same formula over and over again. I give Mama a…

Synopsis: Annabel and Lucas are faced with the challenge of raising his young nieces that were left alone in the forest for 5 years…. but how alone were they?
Starring: Jessica Chastain, Nikolaj Coster-Waldau, Megan Charpentier, Isabelle Nelisse, Daniel Kash, Jane Moffat, Javier Botet.
Directed by: Andres Muschietti
Produced by: Toma 78, De Milo
Wide Release: Jan 18th, 2013