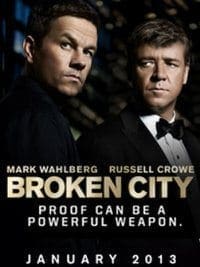 Broken City comes from director Allen Hughes who you might know as one half of the Hughes Brothers (From Hell, The Book of Eli) and tells the story of a cop turned private investigator who is hired by the mayor to get proof that his wife is cheating on him. It seems like your average, run of the mill mystery-thriller, but the movie sends you through so many loops and twists it tricks you into thinking its smarter than it really is. To be honest, all of those twists and turns made it hard to follow and I can’t even be sure I fully understand it.

This movie is devoid of good intentions as far as the characters are concerned. There is plenty of humor, but not one of the characters has an honest bone in their body. Everyone is trying to, or already has, screwed someone over and their offenses run the gamut from sleeping with others spouses to extortion to murder. In fact, the only ray of light in the entire movie is Mark Wahlberg’s naïve assistant. There are too many characters chomping at the bit for their chance to be the biggest scumbag in New York City and they are loosely sewn together into a sub-par plot.

The cast consists of some pretty heavy hitters led by Mark Wahlberg and a terribly spray tanned Russell Crowe. Most of them do an exceptional job, given the material, with the notable exception of Catherine Zeta-Jones. She is just plain awful in this movie. You could have drawn a pair of eyes on a plank of wood and it would have done a better job.

Hughes himself does a pretty good job and the look of the movie definitely mirrors the motives of its characters. Whether or not he decides to remain on his own or if he can distance himself from his previous works remains to be seen.

Broken City won’t win any awards by any means, but it is an enjoyable enough movie for this time of year.

In a city rife with injustice, ex-cop Billy Taggart seeks redemption and revenge after being double-crossed and then framed by its most powerful figure: Mayor Nicholas Hostetler.