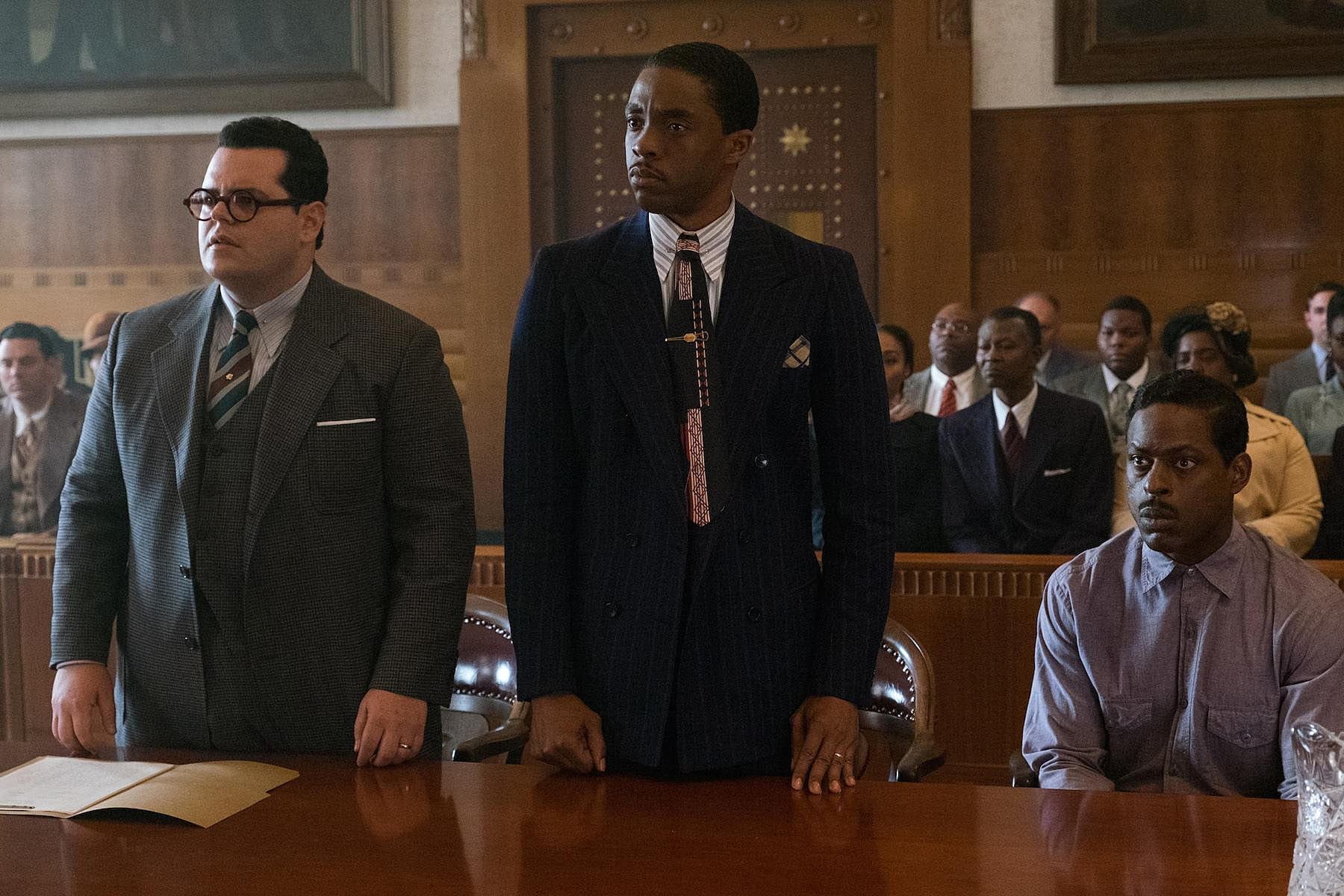 Biographical films have become almost as prevalent as superhero movies in recent times. Now that awards season is nearly upon us, the film studios have been working overtime to get their biographical films out into the public realm. This week brings the release of Marshall, the latest biopic from Open Road Films that focuses on Thurgood Marshall, the first African-American Supreme Court justice.

While most biopics tend to encompass the entirety of the subject’s life, Marshall makes the wise choice of focusing on a single court case during the early career of Thurgood Marshall. Instead of spreading the film too thin, Marshall offers a more in-depth look at a single point in Thurgood Marshall’s career. With this approach, there’s a lot more character development, not only with Marshall but the other main characters in the film as well.

Marshall focuses on the 1940 trial of Joseph Spell (Sterling K. Brown), an African-American chauffeur who was charged with raping his employer, Eleanor Strubing (Kate Hudson), a white woman of the upper class who lived in nearby Greenwich. Spell’s legal team included Thurgood Marshall (Chadwick Boseman), who was joined by Samuel Friedman (Josh Gad), a Jewish lawyer who had not focused on criminal cases before this trial.

This is a young Thurgood Marshall, with the trial taking place shortly after his Supreme Court victory in Chambers v. Florida. This was long before he would become a U.S. Supreme Court Justice, and more than a decade before his most famous trial, Brown v. Board of Education. It was an interesting choice for a Thurgood Marshall biopic, but with the inclusion of Friedman at a time when Jewish people were being discriminated against, the film marries two unlikely friends going through similar plights at that point in history.

The film focuses on the civil rights trial at the center of Marshall, but there’s plenty of humor and even brief snippets of the outside world. Marshall’s wife, Buster Marshall (Keesha Sharp), makes a few appearances as we see how the couple struggled with conceiving a child, and how this played against his triumphs as a lawyer. Without being a fully fleshed out narrative, these snippets of Buster Marshall tend to take away from the brisk pacing of the film, but the distraction is a welcome one more often than not.

As expected, Boseman plays a young Thurgood Marshall spot on, with a stellar performance coming from Gad as well. At a time when race relations are breaking down in America, this film goes back to remind us just how bad things were, and how much we’ve progressed over time. While James Cromwell is convincing as a somewhat racist Judge Foster, there are parallels with the current administration governing the United States.

Marshall is a powerful film that doesn’t slap you in the face like 12 Years a Slave but still gets the point across. By combining the thrills of a good courtroom drama, with the high tensions of race relations in the 1940s, and just enough levity to keep the film from falling into the dark corners of racism, Marshall is both entertaining and educational with only a few pacing hiccups.

Synopsis: About a young Thurgood Marshall, the first African-American Supreme Court Justice, as he battles through one of his career-defining cases.

One Night in Miami | An Unapologetic Ideological Brawl about Black...