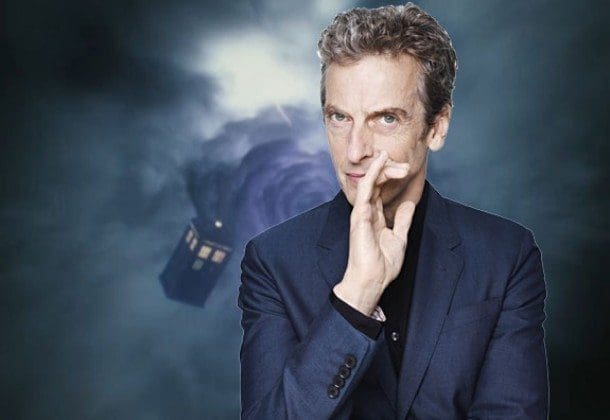 I’m going to meet the Twelfth Doctor, I’m going to meet the Twelfth Doctor, is all that’s running through my mind as I’m standing in rainy London waiting for the train. With unbelievable luck, I’d scored some tickets to the BBC Studios to watch Matt Smith’s successor unveiled live to the world. Millions would be watching on their TV screen, but only a lucky four hundred would be seeing the new man in the flesh, with their own eyes.

We were asked to dress up as our favourite Doctor or companion, but I’ve never been one for cosplay. I have a blue suit, and thought, “David Tennant used to wear one occasionally – this’ll do.” I do admit I felt a bit out-of-place standing next to two other David Tennants, both of who made a fantastic effort, sideburns and everything! We were ushered in through a side gate, and make our way into the studio. I pass Steven Moffat carrying a swanky briefcase, and after a quick hello, I jokingly ask if all Doctor Who secrets were hidden in there. “No, just pictures of Weeping Angels,” is his reply, and I’m left wondering what exactly Moffat gets up to at home.

Peter Davison is in there too, along with a whole bunch of other British actors that weren’t involved in the show whatsoever, and made me think “What an earth are you doing here?” The clock strikes seven, (or strikes McCoy, but more on that later), and the show begins! I sit through twenty minutes of people I don’t know talking about how they love Doctor Who and what it means to Britain and the world, all the time thinking The Twelfth Doctor is coming, the Twelfth Doctor is coming.

Finally, it is announced, and Peter Capaldi walks out to giant applause. Seriously, the sound was not done justice on television. I watched it back later, and sure, through the BBC’s sound recording equipment it sounds like we were applauding enthusiastically, but inside the actual studio we were going bananas. Capaldi gives a quick interview about how he’s looking forward to playing the Doctor (I mean, who wouldn’t?) and then at half past McCoy (keep reading), the show ends and everything becomes off camera. We all congratulate Capaldi on becoming Doctor Twelve, and that’s that – we’re led out of the studio, all four hundred of us feeling empowered that we were the first to meet the brand new Doctor.

Personally, I think Peter Capaldi is a great choice – when Matt Smith was announced, it was a fresh new direction. Smith was young, full of bright manic childish energy, and brought so much kookiness to the role. Going for an older, established actor is a brave and brilliant move – I imagine Capaldi will bring the sterner, wiser Doctor out in the character. I was chatting to Waris Hussein (the original Doctor Who director from the Hartnell years) at the London Film & Comic Con last month, and he was telling me that the Doctor should be played by an older man, free from sexualisation and romance with his companions (he described the Doctor as being so old and wise and mysterious that he should automatically be ‘unavailable’ for that sort of stuff). Well, Waris, it looks like you may be getting your wish!

All I can say is, good luck, Peter Capaldi. There’s millions of us rabid fans that you’re going to have to deal with over the coming years. I hope you’ve brought some pens.

Okay, so some of you may be wondering why I’ve been referring to seven o’clock as McCoy o’clock. Well, this is hardly an original idea, but now that we have twelve Doctors… the time has come for a Doctor Who Clock, where the actor surnames replace the hours (Four and six o’clock are referred to as Tom and Colin respectively, to avoid confusion). So quarter past ten becomes quarter past Tennant. At the time of writing this, it is half past Pertwee. And so on!

Go, readers of GNN! Make this a thing!

Beat the heat with Burlesque; Thrill the World Dancers & Brain...