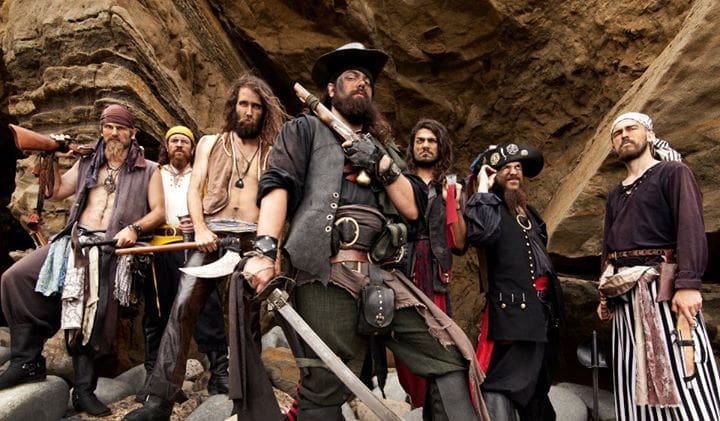 A little while ago, I posted an article about my pirate pals in the Heavy Mahogany band The Dread Crew of Oddwood based out of San Diego.  They played Tempe’s Buccaneer Brewfest last year with local epic metal band Adavant.  They were very well received by my friends and me, so much so that I took a trip to see them play the California Pleasure Faire this past May.  During that time, I was able to meet and get to know a few of them a bit more.  I recently had the pleasure of speaking with them again, and this time, I wanted to get a little more back-story on the band and its members.  Ruba Jouba aka Francis was so kind as to hold his cannonball fire and plank walking schedules for a few minutes to answer some of my fan-girl questions.

GNN: First thing’s first; let’s get some history on the band.  When was it formed, and by whom?  Who are the newest and oldest members?

Ruba: The band was formed as part of an accident involving an obscure video game convention and the now defunct Ojai Pirate Festival. Wolfbeard, Castle, Riven, and I met along with five other manly and archaic individuals (Elvil, Finwe, Victor, Nathaniel, and El Macho) to discuss our love of Ecco the Dolphin, and ended up drinking and playing music all night. Wolfbeard has always wanted to be a pirate, so we decided to all become pirates in solidarity of his poor judgment.
Obviously the lineup has changed quite a bit, and Victor was soon replaced by Smithy. El Macho, Elvil, Nathaniel, and Finwe left, and twin brothers Stark and Deckard Cordwain joined. At some point Jorge Miguel was a pretty constant member of the band, but he’s pretty busy with other projects lately. You might see more of him in the future. The whole story behind the lineup changes could fill a fucking novel, so I’ll spare you.

GNN: How did you come up with the name?

Ruba: I originally suggested calling the band “Black Sabbath” as a reference to my third favorite band, Black Sabbath. I figured it’d be more obscure than a reference to MANOWAR or King Diamond. The guys weren’t into it and we nearly called the band “The Brotherhood of the Bleeding Tree” because the wood we were using as targets for our throwing axes had red sap. I think we must have gotten pretty drunk though, because we settled on “The Dread Crew of Oddwood.” It doesn’t really mean anything. We’re pirates from Oddwood. Oddwood is a place, “Dread Crew” is basically being used as a synonym for “pirates”. I think a few of the guys also wanted to call it “Reign the Helm” but Castle and I weren’t going to let that fly. We let that name stay as the title of the first album, though.

GNN: Can you give a list of all your instruments?

Ruba: At the moment, we have Accordion, [stand-up] Bass, Drums, Guitar, Mandolin, Toy Piano, Whistle, and Bouzouki. I know, that’s eight instruments and we only have seven guys. There’s some switching that happens.
In the past, we’ve had full-time concertina, sombrero, and flag players. Finwe also switched between guitar, ukulele, and flute (I used to play mandolin before Deckard joined the band). We also have a habit of adding layers to our recordings, so if you listen carefully you might hear banjo, marimba, French horn, tuba, trombone, trumpet, bones, and all kinds of other silly things.

GNN: Who/what (aside from Blackbeard, Captain Kidd, Black Bart, and rum) are your main influences?

Ruba: Oh my, the list is quite long. I’ll try to speak for everyone in the group, but I’m sure I’ll miss a few big ones. For this band, I’d say that MANOWAR, Iron Maiden, Amon Amarth, Motörhead, Flogging Molly, Slayer, Metallica, Korpiklaani, and Finntroll are pretty big ones. I think some of the guys listen to a lot of new age Irish Folk stuff like Lunasa, but I don’t know the names of the groups they’re into. Personally, my songwriting influence for this group is mostly limited to Motörhead and MANOWAR lately. Heavy and catchy with very little bullshit. I’ve been getting into a lot of black metal lately, so that might rear its ugly head in the next batch of songs. We’ll see.

GNN: How do you obtain your stage outfits?  Surely they’re all hand made, but can you give us some insight as to how you’ve put them together?  Because they’re just fabulous.

Ruba: You’d probably have to ask Wolfbeard about that. He makes most of the coolest stuff and probably made at least one piece in each of our outfits. Most of the stuff is either made by us or given to us, though. The second you start buying things at the store, you start looking like you bought things at a store. The most important ingredient to our “look” is probably time, all things considered. We’ve accumulated so much bizarre shit over the years.

GNN: What are some of the more memorable shows you’ve performed?

Ruba: My favorite show in recent memory was at the Key Club supporting Turisas and Firewind. Not an enormous fan of the recorded music from either of those bands, but both of them were absolutely spotless live. I strongly recommend seeing them if you get the chance, even if you can’t get into the recordings. We also did a pretty fun show at the Renaissance Pleasure Faire recently that involved lots of smashed instruments and me nearly breaking Wolfbeard’s arm. Sometimes shit gets pretty fucking crazy.

GNN: Can you shed some light on your song writing process?

Ruba: The first thing to realize is that it’s different from person to person, so I can only really answer for myself. I usually listen to a bunch of stuff that I like and study song and lyrical structures, and then I figure out what the song will be about. I often write the “song” in prose before even picking up an instrument, and then I’ll try to come up with clever ways to change the prose to verse, and try singing it. I’ll usually come up with one musical idea and improvise the rest after writing lyrics, and keep doing that until I come up with something I like. Once I’m done, I’ll let the song sit around for a few weeks or even months, and come back to edit it with fresh ears. Some songs happen in 20 minutes, some take a year or two to complete. You never know.

GNN: What’s the recording process like?  Were you all able to record in the studio together, or was it a more sporadic thing, sending tracks back and forth?

Ruba: All three of our albums have been multi-tracked. We just don’t have the time or budget to do an album with all of us playing in the room together. Most of the band usually doesn’t even know how to play the songs when we go into the studio, and we learn them as we go. It’s tough to get together to rehearse before recording when we occupy about 150 miles of the California coast.

Ruba: Well first of all, they’re pretty rare. We usually only rehearse right before recording an album, so we just have group song-editing and learning sessions. Once we know the songs well enough to record them, we start incorporating them into small gigs here and there, and eventually they’re good enough to play at bigger shows. So I guess a short answer would be, if you want to see us practice, go to the lowest profile gig you can find. 😉

GNN: What’s been your biggest challenge as a band and how did you overcome it?

Ruba: Our biggest challenge is absolutely living very far apart from one another. We overcome it with the power of the Internet. Being able to record a demo of a new song and then email it to the whole band to learn is a fucking life savor. This band wouldn’t exist if we didn’t have Internet access.

GNN: Any big plans for the future that you could hint us on?

Ruba: We’re going on tour, uh, this week! Beyond that, I’ve written about 20 minutes of new material that I’m still editing. I figure that’s more than my share of songs if we do another album, so I’ll cool it for now. Not sure who else has been writing, but we’ll probably talk about it a lot on tour. We’re also playing around with the idea of shooting a music video when we get back, but once again, I can’t promise anything right now. We don’t have the budget for another Queen’s Decree style production at the moment, so we might do something that won’t require as large of a crew or as extravagant of a set. Don’t get too excited until we announce something officially, though.

The guys are to set sail on a North American tour starting August 7th in Oakland, rounding back to Hollywood to play a very special show with Steampunky robotic band STEAM POWERED GIRAFFE on Sunday, September 8th.   If you live in one of the cities listed in the flyer below, GO SEE THEM!  You absolutely will not regret it, not one little bit.  And if you happen to live in Hollywood, I’ll see you at the Roxy on 9/8! Tickets to this event can be found here!!!

15 Minutes of Fame: A Review of Andy Warhol Portraits

Inside the Crowd | Life is Beautiful 2017