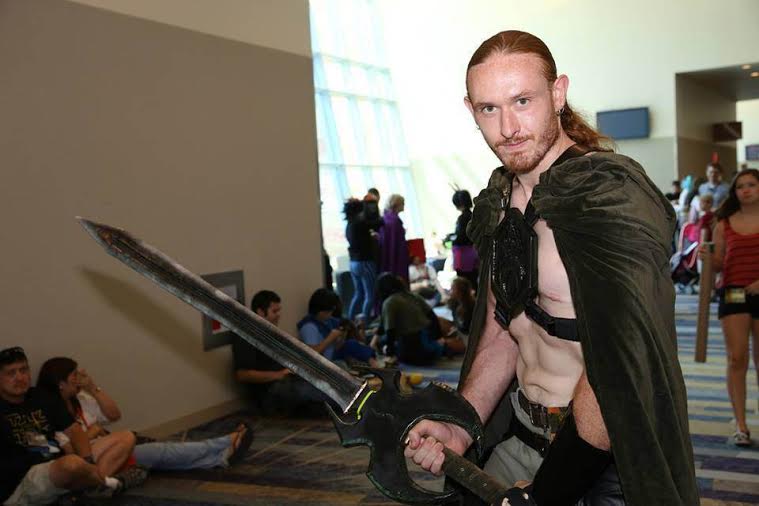 Phoenix Comicon recently passed us by, leaving all of us cosplayers with ideas and anxiousness for another year. Several other cities are getting ready to open the floodgates to their comicons, however, so I’m sure there are plenty of people looking to create a costume of their own, but perhaps don’t know where to begin or may not have enough money. Well, first of all, don’t ever let a small budget get in the way of creating something spectacular. Each time I’ve done cosplay, it’s been on a very small budget using materials found around the house and at Goodwill.

I was on the lookout this year for people with the same lower budget cosplaying goals, as well as those who possess a great eye for detail and originality in their costumes. Upon browsing all of the anime, superhero, and TV series cosplayers, I spotted a long-haired redhead standing rather majestically in the convention center café… drinking a coffee, just like gladiators do. I was rather intrigued by his costume, thus decided to ask him a few questions about what his ideas were on the subject. Introducing, Sol Black:

Short answer?  I always wanted to be a superhero.Now let me tell you a story.  Growing up in the 80s and 90s, I got to see the best of the action cartoons and films.  Everything is anime and video games now, and I love those too, but I come from a different era.  I didn’t even get a game system until high school!  My friends and I always liked to play “Guys”–real creative name, I know, and over the years it went from begging my family for toys to making props out of found objects in my dad’s work shop and around the neighborhood.  I guess you could say I gravitate toward the props more than the costumes. By the time I became an independent adult, I had incorporated fantasy/fiction style elements into my everyday life.  I think there’s a boyish part of me that believes fantasy and reality have to be so far apart.  My mom taught me how to sew in junior high, but it was really 2002 before I went out of my way to make something.  It’s been sporadic over the years, but it’s always kind of been there, to the point I’ve considered designing a clothing line.  Then a couple of years ago I noticed that people were going all out to make amazing costumes for events, and making a name for themselves, and so I decided to apply my skills and interest into this new world I’d discovered.  At the end of the day, I just never really stopped playing “Guys”.

I suppose that depends on how you’re defining the context.  Last year’s Phoenix Comicon saw a Steampunk/Babylon 5 Officer mashup and a generic karate fighter.  I’ve also thrown together a Hachmed the Terrorist (Team America), Jedi Jesus, and built a purposefully awful suit of samurai armor out of cardboard and twine with parody D&D stats scribbled on them in marker.  I’m probably most proud of that one, but mostly for the humor factor.  None of these were ever designed to have any longevity, and were just fun to put together for the events.  I also designed and hand stitched a [very poorly fitted] Frock coat for my one year wedding anniversary in 2004. This year’s costume was the first serious attempt at something repeatable, with some real craftsmanship behind it. The demands of the costume determine that.  I rely heavily on found materials, and secondhand stores like Goodwill.  I also use discount and closeout outlets, such as Big Lots! And Harbor Freight Tools frequently, especially for my tools to work the materials.  And, of course, regular hardware and fabric stores for what I can’t find elsewhere.  The most important thing is to look for materials that will be easy to work with. Keep an eye out for appropriate shapes for ready-made objects (you can always paint over a good shape; It’s much harder to shape a great color.)  With this in mind, you can shop almost anywhere, and budget becomes less of an issue.  Yard sales are great too.  If you plan far enough in advance, you give yourself enough time to manage availability of materials and mistakes, and it also potentially increases your budget.

I do a lot of DIY projects anyway, so I have a bunch of stuff accumulated.  I’m always picking things up because they look neat, so I have tons of stuff just lying around.  Probably the most useful thing I have is my rotary tool (dremel), but I don’t think that’s what you meant.  I keep buttons, and canvas webbing, and buckles when I lose use for an object as a whole and scrap it.  I had a couple of center release buckles from 10 years ago that became the connectors on my chest harness this year.  I think those win.

Wood.  Hands down.  My dad was a carpenter, so I learned a lot from him.  My mother is an excellent seamstress, and I do like sewing, but I don’t always have the patience for it.  Once again, I think that’s why I lean more toward props.  I have carved so many wooden swords and knives in my day.  I’m still learning about paint, so I’m not very good with it yet, but I enjoy doing things with color.  As a side note, Revlon Colorstay 220 Rain Forest is the perfect shiny dark green.  Also, nail polish; It’s great for touch-ups and details, though you might want to get a set of detail brushes since the bottle brush is quite broad.  I’m also learning about resins and plastics and hope to start casting and moulding before long.  I really like working with fiberglass, but it’s a long process.  A lot of hurry up and wait.  Same with enamel painting (other paints dry/cure faster).  I’ll be digging into foam in the near future too, but I like durable stuff, so wood, leather, and heavy cloth will always be my backbone.

Oh hoho, yes!  Oh boy, I’m a narcissist.  So I was given a ridiculous nickname in my sophomore year of high school: Sol Daddy the Red Headed Ninja.  It stuck.  Maybe because I’m a little ridiculous myself?  Anyway, some friends and I started developing our own superhero team based off ourselves, and even though it never really went anywhere, the characters and ideas have stuck around with us for the last 16 years.  Especially me.  I kind of refuse to grow up.  Anyway, there have been many iterations of Sol Daddy over the years, and this year’s Phoenix Comicon costume was kind of the culmination of it all.  Elements of He-Man and Thundercats, of pro wrestling and heavy metal, of bikers and Final Fantasy…Of all my influences.  More simply put, high fantasy blended with sci-fi, topped with gritty post-apocalyptic themes.  It’s actually the first of a seven part cosplay series based on my original character, which will be illuminated through various story telling media over the course of the next few months.  I’ll tell you the secret of it all; magic and technology are the same thing, and ANYTHING is possible.

The easiest place to start is to find a theme, setting, or character that really resonates with you, and start collecting pieces to craft the costume.  Don’t even worry about when the next convention or event is; just begin with an idea and start building.  There are TONS of opportunities out there.

Don’t be afraid to make it your own.  People get really caught up in the purity or precision of a cosplay, which is foolish.  We’re all there to have fun.  It’s not a competition (there ARE competitions, but in general, cosplay is art, not sport).  I am very fond of playing the “What if…?” game; imagining how characters would act and look in a different setting, or how I would be if I were a character in that world.  Original and generic costumes will not garner nearly as much attention simply on the familiarity factor, but they are super fun to create.  You get to tell your own story then.

Favored characters can be fun too, and an easy place to start simply because the design is laid out for you already.  Either way, you need to give yourself plenty of time.  As much time as you think you need, double it.  You can get away with cheap materials if you’re clever and careful, but when you’re first starting out, be forgiving of mistakes.

Treat every fiber of your project as gold so that you don’t ruin it with haste.  The dollar store is your friend, and so is the recycling bin.  DO NOT be afraid to ask for scrap materials from people, and constantly search places like Craigslist for free and cheap materials.  Scrap lumber, furniture, old clothes, etc.

Remember to keep an eye out for appealing shapes rather than exact style matches.  You will need to modify almost everything anyway, so always be on the lookout for sexy lines and curves.

Then just practice.  Even practice cutting paper and cardboard.  Get used to the feel of a box knife, scissors, and other various tools you’ll be using.  Research social media, there are hundreds, maybe thousands of us, from simple hobbyists to professional costumers and prop makers.  There are videos, blogs, books, any information you could want.  Knowledge is your friend, and application and practice are your king and queen.  As I go along my journey, I’ll be sharing tips and tricks as well, and I’m always open to questions. Feel free to check out my Facebook page as well!

So, in closing, to all of the geeks out there who have never been involved with cosplay before, but are itching to get into it, and may think you don’t have enough money to create something amazing and photogenic… STOP THINKING THOSE THINGS IMMEDIATELY! If you follow the advice of Sol Black here, you will be able to produce something everyone will love and you’ll never want to take off. Indeed, ANYTHING IS POSSIBLE!

On behalf of the entire GNN team, the Editor would love for you all to have a safe and happy convention/cosplay experience this year (and don’t hesitate to comment below with some pictures and comments about your favorite cosplayers)!

I liked your blog very much.

I want to thank you for the contribution.