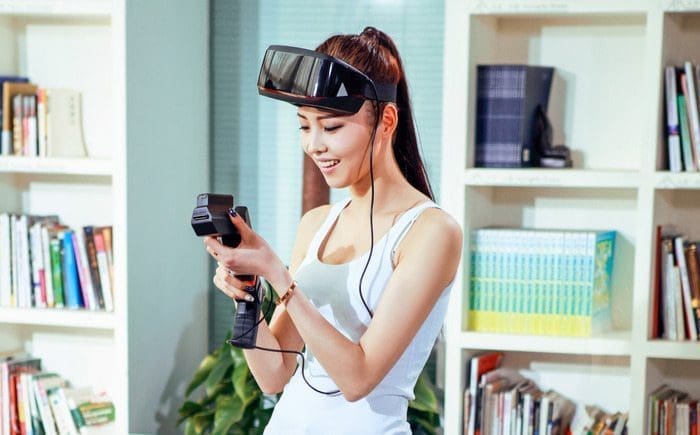 A new, All-In-One virtual reality machine was released on the KickStarter community. This system is called the ANTVR Kit, the ANTVR currently had close to 700 backers with the total of $250,000 in funds; this broke their original goal of $200,000. Founder Qin Zheng teamed up with the Chief Scientist Scouncheng Zhang, a physicist on condensed matter at Stanford University, in order to make their high tech VR machine. Zheng said in the release video of the ANTVR that he has fell in love with the idea of Virtual reality, Mr. Zheng mentions in the video of him quitting his PhD in efforts to make this dream come true. From the demos shown in the release video the machine can work with movement, viewing (much like the Oculus rift), a gun, steering wheel, a joystick, and a controller all in one device.

Problems that have been introduced with the Oculus rift has been the display errors, whether it is a display screening being stretched too far, or the display shrinking too much. ANTVR has addressed this issue in their announcement video. The lenses used in the ANTVR are built to have the perfect common ratio of 1.03mega/4:3 ratio in efforts to make a perfect display without having to sacrifice the resolution.

Xbox gamers, this is the shining moment for you, the ANTVR kit breaks the norm by allowing their VR system to work on all systems. That’s right ALL SYSTEMS. This bypasses the Oculus rift and Sony’s VR system due to their exclusivity. So no matter what system  you have now, or what system you will have in the future you can use this VR machine.

For movement in virtual reality ANTVR nailed it on the head. Their inertia movement sensors picks up small movements and will move the player in that direction. So a small 4×4 feet area is large enough to travel giant worlds like Skyrim.

The ANTVR not only has the community support, it also has support from their competitor VIRTUIX and for only $275.00 for the development kit the ANTVR will soon be in millions of gamers homes from around the world.

View the Kickstarter right HERE and watch their video below: