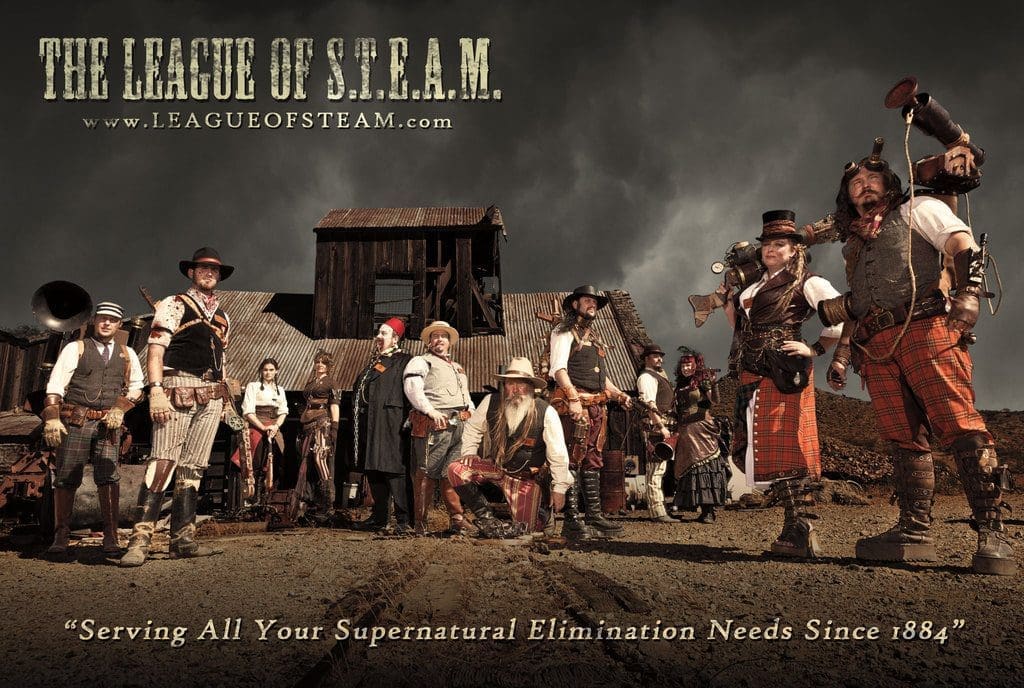 Calling all Sirs and Madams of the Steampunk universe!  I recently stumbled upon a wonderful, not quite so new web series devoted to all things Steampunk, with a ghostly twist!  If you like tales of adventure and mystery, and tend to take pride in your bustier and/or mustache, then I’ve got just the thing for you!  Check out the following press release for more info:

Los Angeles, CA – This week, veteran Steampunk entertainers The League of S.T.E.A.M. announced the highly-anticipated third season of their award-winning web series The Adventures of the League of S.T.E.A.M.  The announcement was made through the launch of a Kickstarter fundraising project, where the group seeks $25,000 to aid in the show’s production.
The hit YouTube show’s second season (also Kickstarter-funded) received accolades earlier this year, with nominations at the Streamy Awards and the Geekie Awards, as well as two nods at the IAWTV Awards.  The episodes featured guest appearances by well-known geek icons like Doug Jones (Hellboy, Falling Skies), Robin Thorsen (The Guild), and Grant Imahara (Mythbusters).
The League of S.T.E.A.M. is best known for creating elaborate costumes, classic monsters and creatures, and fully-functional Steampunk style props.  The group plans to continue creating these trademark elements, with higher production quality and expanded resources, if the fundraising campaign is successful.
Amongst other rewards, backers at any pledge level are promised exclusive behind-the-scenes access throughout the production of the season, featuring sneak peaks at upcoming episodes.  The Kickstarter project will end October 3rd, 2013.
Please support this independently-produced project by helping to spread the word!
About the League of STEAM
The League of S.T.E.A.M. is a talented group of artists, performers, and inventors who take their audience back to a time of intrepid adventures, bridging the gap between the supernatural and the scientific; they are monster hunters from the Victorian era. The group is best known for their award-winning web series The Adventures of the League of S.T.E.A.M., which chronicles the group’s comedic monster-hunting misadventures.  The League of S.T.E.A.M. specializes in interactive entertainment, performing with a fusion of fantastic technology, interactive demonstrations, and theatrical trickery, and their live events showcase a mesmerizing array of fully functional gadgets and props meticulously designed to enchant and entertain audiences of all ages.  Their mission is to create unforgettable entertainment, telling their stories through a unique mix of interactive live shows, a popular web series, audio podcasts, and interactive fan club, and more.”

I wanted to add a few words of my own on what I thought about the series, so here goes…
The props and costumes are absolutely phenomenal – very impressive home made stuff; comicon worthy and beyond.  The scenarios are well thought out and funny, with a mixture of modern speech and Victorian tone.  They like to incorporate other nerd-friendly material within their scripts, such as famous Star Trek quotes – a tip of the top hat to fellow geeks everywhere.  I love the old time piano that is used in the episodes, however I must make a note that my pirate pals in The Dread Crew of Oddwood were featured in the episode posted below.  All in all, a solid Steampunky series! Do yourselves a favor by checking out their channel, then the video to their Kickstarter (I laughed at the kitten part!) posted below.  If you find you absolutely adore The League of S.T.E.A.M’s series, and would like to help them continue their steamy stunts, go ahead and throw them some coins.  Help an awesome, independent project reach its full potential, and keep the Steampunk craze alive!

The Mega Men Podcast #43: A Dark Abyss Portal of Humanity