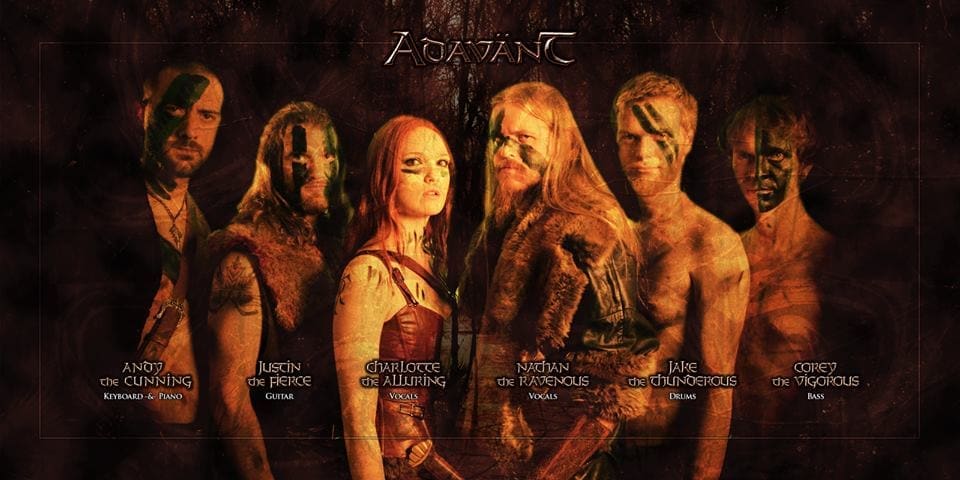 Epic metaller’s ADAVANT have been making music in the underground metal scene in Arizona for six years.  Later in the month, they will release their second full length album, and I had the pleasure of reviewing it before it’s released.  “A Light Cut Through the Void” is an incredible journey of many different genres of music, wrapped in an exciting metal package, and it is sure to captivate the ears and hearts of music lovers all over.

The album starts off with a somber piano and church bell intro, but is quickly given a lift with lovely harps and flutes (played by guest Ryan Roubison) .  It gradually transforms into the sound of the beginning of an epic journey, where you’d imagine ranks of men forming to fight, storming over a hill, and gazing across their battle field.  Suddenly, the battle begins, as Jake the Thunderous, Justin the Fierce, Corey the Vigorous, and Andy the Cunning take over with their powerful combination of drums, guitar, bass, and keys, and eventually vocalists Nathan the Ravenous and Charlotte the Alluring forcefully introduce us to what is to come.

It is important to note that the lyrics in the intro speak of a man who finds himself lost in the darkness, though he suddenly runs into a cloaked hermit who offers him campfire warmth, beer, and bard-like tales.  After the man pours himself a “spot of ale”, there’s a little jig that reminds the listener of the band’s folk roots.  The beginning of the adventure of A Light Cut Through the Void has begun…

Track two shows us how capable the band is of creating a true epic metal song.  A song of a great battle against all of Mother Nature’s cruelest elements, “The Battle of Maelstrom Valley” throws us into the middle of war, and ruthlessly shows all sides of it.  The operatic vocals are especially powerful here, and, I have to say it, a fierce guitar solo strikes through the center of the song, once the shards of ice start falling from the sky.

Once the storm clears however, we hear a group of monks singing a hymn, which leads to the sound of a frothy brew being poured into a glass.  “The Drunken Monks of Halamathunk” is a catchy, classic Adavant song, and a fan favorite.  One of the more folky songs on the album, it introduces the listener to three troubled souls who find their paths to pardon and happiness in their lives, through the religion of well… booze.  Perhaps it’s best to take it in stride when the Monks tell you “there’s not one problem on this Earth that can’t be solved with alcohol.”

The listener is then taken deep into the forest to hunt “The Beast of Oakenstone”, a massive werewolf type creature that the protagonist has been tracking for days.  The howls at the beginning send shivers down the spine, and you may find yourself trying to catch your breath from the galloping drums throughout.  There is a moment to do this though… only to headbang from 3:54 to 4:18 where it gets especially dark.  I’ll leave it there because I don’t want to spoil the end of the tale, however be sure to listen through to the end of it.

The next song is quite special in that it connects a certain story from their previous album “Tale Untold”.  If you go back to “Voyage of the Vagrant Heart”, and then listen carefully to “Captain’s Eulogy”, you’ll find a hidden gem, so to speak.  The band has created yet another catchy pirate ballad that will have you chanting along “Let’s Sail Away!”  Not a Styx reference though, I promise.  No matter how badly producer Dylan Ross wants to believe it.

The hermit from the beginning of the album makes an appearance next, and tells the listener to refill his mug.  “The Refill” is sure to become a new fan favorite, as it’s already captured the hearts and glasses of many of the band’s dear friends.  And I can promise you, everyone is very careful not to spill too much beer while dancing about.  Because this is an instrumental song, you can hear the four members playing to their absolute fullest capacity.  There’s lots of impressive work done on this song.

With the Drunken Monks making their debut on this album, the hermit offering many cups of ale to the listener, and then offering us a refill, you’d think this album revolves around beer.  Well, you may be correct in that assumption, as the next song, The Black Barrel Ale, continues on the boozy path.  This song is just another incredible insight to the storytelling abilities of this band.  And with experimental riffs, fun chant-alongs, bouncy piano work, lovely female vocals, and what sounds like Satan himself as a guest, I’ve already had numerous people tell me that this may be their new favorite Adavant song, from seeing them perform it live.

Next, Charlotte sings the entirety of The Ballad of Abigail McCree.  And if you’ve been paying attention, you may notice another fun tie to the previous album.  This song will speak to many women all over, not only in the sheer beauty of her singing, but in the tale itself; simply a woman concerned with her husband’s whereabouts… with a twist.  I listened to this song many times over, and though it’s sometimes difficult to pull yourself away from the vocals, there is quite a magnificent mash-up by the members behind it.  So be sure to pay close attention to the entire song.

Okay.  This was the part I was both very excited and nervous for.  “On Crimson Wing” is the masterpiece on the album, clocking in at thirteen daring, glorious minutes.  I literally don’t think I have enough words to use for this song.  I just know that if I added up the hours I’ve spent listening to it, it would probably reach more than a day’s time.  Okay… here goes.

After the wind and church bells, Charlotte starts this tale off beautifully with her soprano range.  Enter Ryan Roubison again on his majestic flute of epic proportions, reminding the listener that a metal band CAN create a beautiful, memorable song with a range of instruments (thus the reason I love folk metal so much). As the song progresses, it sucks the listener in to the story of a man who finds a dragon and together, they adventure through the mountains and skies.  There’s even a moment where you can hear the dragon’s wings in the air, and his mighty, fiery roar.

Despite the band’s title of epic/folk metal, it is clear how their influences of all different genres come into play throughout this song.  Pieces of all different kinds of metal, ranging from black, thrash, and death.  And then of course, the obvious classical influence mixed within the folk.  I’m not lying when I tell you I had to listen to this song about nine times before I could really start to describe it, and then three times during my actual writing about it.  Simply put, you need to listen to it for yourself to really capture the true extent of talent that was put into the making of this song.

Alright, it’s hard to, but I need to move on from “On Crimson Wing”, to the last few songs on the album.  “Epilogue – Back Into the World” concludes the plethora of tales on the album, where the man at the beginning wakes up from the night to find the hermit has left him, with a gift.  The final riffs and melodies will tie the beginning and the end together, and after a few moments of silence, a campfire sing-along is presented to the listener.  There is one final song, however; one of the first ever Adavant songs written by Andy the Cunning and Justin the Fierce.  “Pints for the Fallen” is a warrior’s tale, a ballad to the dead; honoring them, remembering them, drinking to them.  Fans will be happy to finally hear this song on an album, as it was specifically a live song for many years.

The artwork was flawlessly constructed by Tony Alongi, whose photography and art can be found here: https://www.facebook.com/tonyalongidesign
Each page appropriately describes the scene of the song, with metallic like Celtic knots in each corner, and of course, the lyrics.  I will also note that most of the images in the album artwork include someone or something the band is close to, represented by, or influenced by.  There was clearly a great deal of thought and work put into these inspiring images, and it further shows how dedicated the band is to creating and distributing a quality album.

A Light Cut Through the Void is truly a masterpiece and will become available on December 21st at their CD release show (details in the flyer below).  Adavant has made a few of these songs available for free download on their Facebook page, as a sincere thank you to all of their fans throughout the years.  You can also preorder A Light Cut Through the Void on their Kickstarter here: http://www.kickstarter.com/projects/2046494798/new-adavant-album-and-merchandise