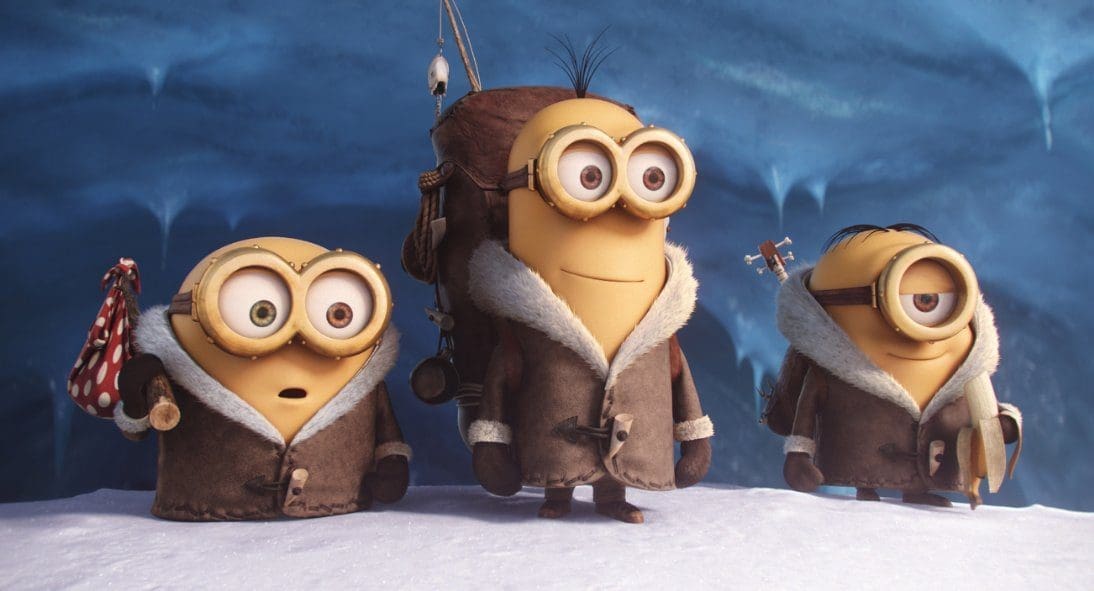 When it comes to appealing to the demographic of young children, you can’t go wrong with a bunch of yellow, nonsensical creatures.  The minions have captured the hearts of families since the first Despicable Me movie and now they have been tasked with headlining their own film, filled with their familiar zany antics and strange vocal noises.  The minions were always a great complimentary, comedic addition to the overall story of Gru and his new family; but in Gru’s absence, they must carry all the humor and emotional weight.  A tall order for these small, two-dimensional personalities.

In Minions, directed by Kyle Balda and Pierre Coffin, we are introduced to their origin story and mission in life, to find the most evil villain on the planet and pledge their eternal service to them.  After some huge stumbles along the way, they wind up discouraged and languishing away in a cave.  Until three minions, Kevin (the leader), Stuart (the adventurous one), and Bob (the aloof one) decide to venture out once more and find the villain that will hire them and save their species from fatal boredom.  It’s now 1968 and they come across the first female super villain, Scarlett Overkill (Sandra Bullock), who takes them to London and assigns them the evil job of stealing the Queen’s royal crown.  With some James Bond-like tech, courtesy of Scarlett’s husband Herb (Jon Hamm), Kevin, Stuart, and Bob set out to prove their henchmen talents and make Scarlett proud.

The premise of Minions is not unlike a Mr. Bean sketch wherein the characters use their actions to carry the movie and the comedy rather than their words.  What words they do use to communicate conveys a skewed version of the English language, a language they developed over millions of years it appears.  Their improper use of Spanish and French words for things is also a funny characteristic all minions share.  Another comparison could be The Three Stooges as Kevin is trying to keep the other two out of trouble and eventually makes mistakes as well.

One of the brilliant and charming aspects of the original Despicable Me film is the family dynamic between Gru and his adopted daughters.  Gru grows as a person over the course of the film and learns to appreciate being a father and not a super villain.  The minions are a family as well, but their emotional progression is lacking so it’s a cavalcade of misadventures without any substance.  Nothing wrong with that at all, but it leaves you wanting more.  The children in Despicable Me were like our ambassadors, translating the humor of Gru and the minions to us in some relatable way.  Without any ambassador in this film, we have to translate the minions actions ourselves and that gets exhausting after a while.  Fortunately the film resolves this problem with over-the-top action sequences.

Minions is not a perfect film and as a prequel they could have found a better device to bring audiences along for the ride than stealing the Queen’s crown or Scarlett Overkill’s uninspired, evil ambitions.  Sandra Bullock is great as Scarlett in the scenes her character is present.  Jon Hamm does a good job as the groovy, inventor husband.  I particularly enjoyed his scene in the dungeon.  If you love the minions and don’t get bored by them after five minutes, this movie should entertain you.  I’d apply that same statement to Penguins of Madagascar, another group of side characters that received a spin-off.  Otherwise this film does not add much to their characters and isn’t very memorable or humorous.  Parents will squirm in their seats and their children will laugh repeatedly.  So in that small aspect, it’s a success.

Synopsis: Minions Stuart, Kevin and Bob are recruited by Scarlet Overkill, a super-villain who, alongside her inventor husband Herb, hatches a plot to take over the world.

LAZER TEAM | Four Loveable Idiots in a Fight for Humanity