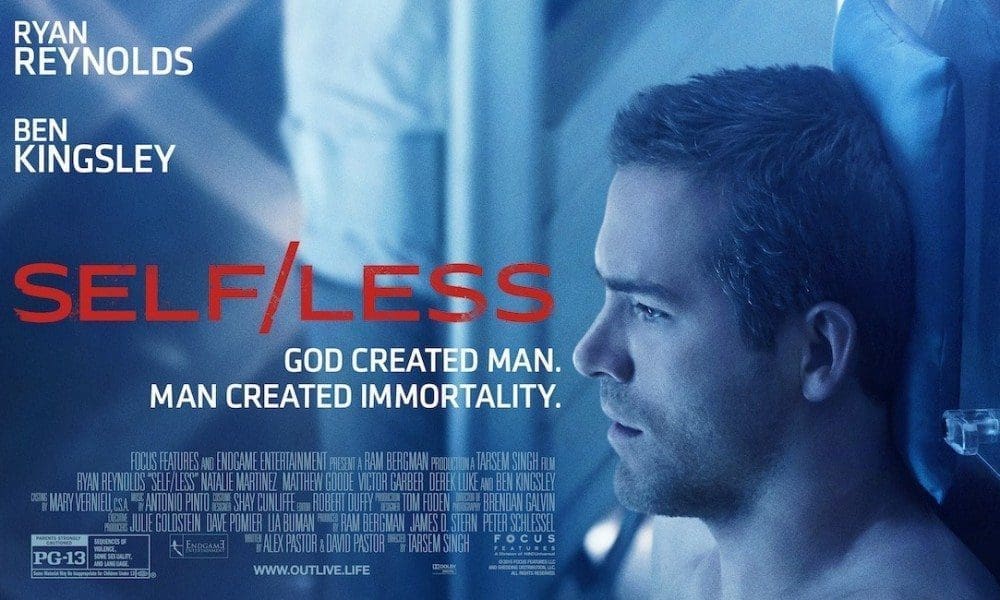 Self/Less is a movie that reminds you a lot of many other sci-fi thrillers grounded in reality, but it never really does anything to separate itself from the pack. It’s a film that almost feels as though it went through several rewrites to get where it’s at today, losing a bit of itself with each subsequent rewrite. That may or may not be what happened, but whatever the case, Self/Less feels lifeless.

The movie stars Ben Kingsley as Damian, a very wealthy businessman who has a terminal illness that will take his life within six months. He undergoes a revolutionary medical procedure that allows him to move his mind from his dying body to a new, younger body. The younger version of Damian is played by Ryan Reynolds.

Both Reynolds and Kingsley perform well, but we don’t see much of Kingsley after a short introduction to the character early in the film. Kingsley is able to establish that the relationship Damian has with his daughter Claire (Michelle Dockery) has seen better days. He makes a half-hearted attempt to reconcile before undergoing the body-changing procedure, but that’s about all we get from the older Damian aside from a quick look at his relationship with longtime friend Martin (Victor Garber).

Without establishing much of the Ben Kingsley version of Damian, many of his motives as the younger Ryan Reynolds version fall into question. He makes some big decisions that help to move the film into the third act, but it seems quite out of character given what little we knew of the older Damian. The older Damian doesn’t seem particularly inquisitive about anything, yet the younger version risks losing what seems to be the perfect life just to find some answers.

Matthew Goode plays Albright, the doctor and businessman responsible for Damian’s revolutionary procedure. He is easily the best part of the film as there’s always an air of mystery surrounding him and his company. It would have been nice to get more of his back story as the procedure has only been done a handful of times, yet he seems to have a small, but loyal army of men working for him.

The movie shifts from a sci-fi thriller, to a mystery movie, to an action film as it moves from one act to the next. Unfortunately, none of these genre changes mesh with one another. It works well-enough as a whole, but never reaches anything above average and feels a bit disjointed at times, especially given what little we know about these characters, even by the end of the film.

You’ll see shades of other films as you sit through Self/Less. There’s a bit of Bourne Identity, and glimpses of Limitless and other sci-fi adventures, but nothing about Self/less truly stands out. It’s a film that you likely won’t regret seeing, but you also won’t remember it two weeks later. You won’t be missing out on much if you decide to skip Self/less.

Synopsis: An extremely wealthy man, dying from cancer, undergoes a radical medical procedure that transfers his consciousness into the body of a healthy young man. But all is not as it seems when he starts to uncover the mystery of the body’s origin and the organization that will kill to protect its cause.

Ghost In The Shell | Movie Review