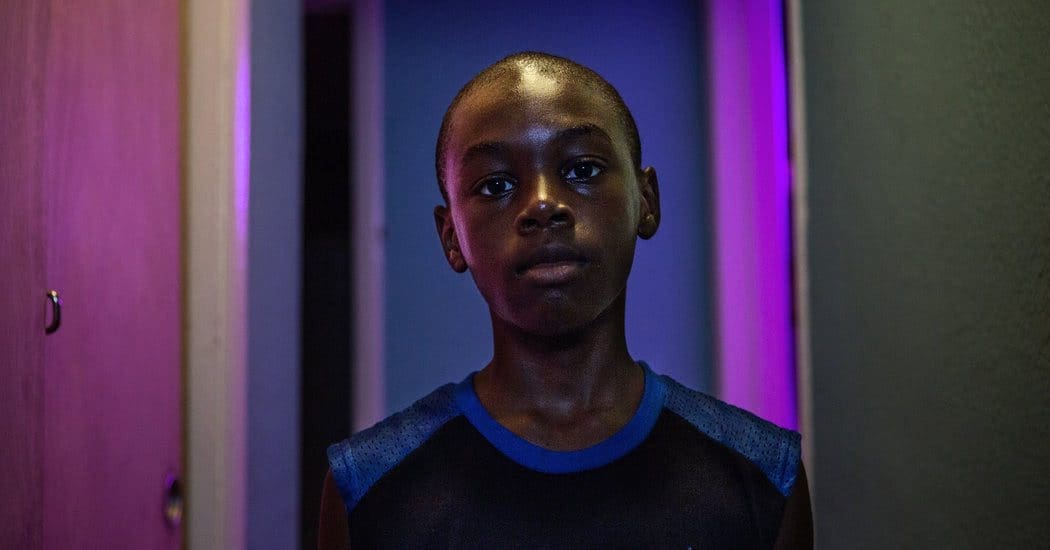 When you were a child, you learned things differently than you do now.  You didn’t have the benefit of hindsight or experience to carry you through difficult situations, but somehow you still managed to carry the burdens of pre-adolescence and enjoy your life whenever possible.  Not all children are fortunate enough to ignore the dark aspects of their youth.  Their environment could be ravaged by decay, violence, neglect, or narcotics and they have to take what little support they can find and hope that they survive through to the other side with their mind and soul intact.  For many of those children, it’s a tall order.  It’s even worse for the children who, on top of all this, have a struggle within them that they are too confused and afraid to share with anyone.

In Moonlight, written and directed by Barry Jenkins, Chiron is a young boy living in Miami and is given the nickname Little.  He lives with his drug-addicted mother and is constantly bullied by kids from school.  With no father in his life, he relutantly accepts the help of a drug dealer named Juan (Mahershala Ali).  Juan tries to impart wisdom into Little’s life, despite his background, and hopes he can help him defend himself in the future.  Juan’s girlfriend Teresa (Janelle Monae) is apprehensive about helping a stranger’s child, but relents when she sees the trouble in Chiron’s eyes.  His mother Paula (Naomie Harris) does not approve of any of this, but her influence in Chiron’s life is relegated to verbal abuse and waking nightmares.  As Chiron grows older and is no longer called Little, he begins to make new friends and lose old ones.  He also begins to learn more about who he is as a person and tries to communicate his thoughts and feelings with Kevin (Jharrel Jerome), the only real friend he has.  Together they learn something about themselves and make decisions based on fear, peer pressure, and confusion that will change their lives forever.

The story in this film is told in three chapters.  We see Chiron as a young boy, a teenager, and a man.  Each chapter offers glimpses of how much Chiron has had to push back the terrible influences that will later shape his future.  As time progresses you begin to see that push back weakening and Chiron accepting his fate.  Whether that fate is inevitable is debatable, but the lack of communication among the black community, and many others, about a person’s ability to accept his sexual identity is one of the main factors in how he turns out.  It’s just one example of how we grow as human beings.  Do we rise above our insecurities or do we let them consume us and be defined by our worst qualities.  Qualities we adopt from others who would like nothing more than to see us fail.

Moonlight is told in a very heartfelt and visceral manner.  The scenes are not played with any overt, emotional impact.  It’s done in a matter-of-fact way and allows you to experience the situation as if you were Chiron, or Teresa,or Kevin.  The realistic tone and strong character development is what makes this such an engaging film.  You only need to look into the eyes of the three actors playing Chiron to see the torment and agony he keeps bottled up so he can avoid the ridicule and persecution of people, who are too insecure themselves to just let him be happy.

Another element of this movie is its honesty in storytelling.  It doesn’t ignore the harsh elements of growing up in a poor, black community. It also gives depth to the characters living in those communities and gives you reasons for their actions.  Their backstories help you not to immediately write them off as villains or criminals.  They are multi-faceted individuals who are misguided and some of them take the path of terrible consequences.  Others witness all the examples around them and tell themselves not to make the same mistakes.  It’s this struggle in Chiron that we are invested in and the sincerity of the performance helps make that emotional connection between us and his character even stronger.  There are other films that share this similar style of storytelling and subject matter, but Moonlight comes at it from a unique perspective.  An independent film about a poverty-stricken black kid growing up gay with no outlet to express that knowledge thoughtfully.  How does someone cope with that anguish?  How does someone even begin to live an honest life with pride and confidence if he can’t even share who he really is?

Moonlight hits all the right aspects of a great film and tells a story in a way that’s both emotionally challenging and personal.  The camera work isn’t always on point and some artistic choices don’t land as well as they could have, but my eyes never wander when Chiron is on screen.  I am on his journey of self-discovery and I’ll accept whatever decision he chooses to make as long as he’s truly happy.  Mahershala Ali does a remarkable job and, even though he is not a big part of the movie, his impact is felt throughtout.  Janelle Monae as Teresa is also a highlight.  She is the mother that Chiron needed when his real mother couldn’t be.  Monae’s personality brings energy to the movie and lightens up the emotional tension.

One of my favorite characters is Kevin, played by Jaden Piner, Jharrel Jerome, and Andre Holland.  Jharrel Jerome and Andre Holland specifically give Kevin a personality that really elevates his presence and provides a positive outlook to Chiron’s endless sea of despair.  All of these supporting characters are terrific in their own right and they compliment the spectacular performances of the actors who play Chiron. Those actors are Alex R. Hibbert, Ashton Sanders, and Trevante Rhodes.  Each one of them brings a nuance to the character that is invaluable and a testament to the direction of Barry Jenkins.  Jenkins found a way to make these three actors feel like one person.

I feel this movie is important for not only the subject matter, but also for the lesson it imparts on all of us to communicate with each other.  We all have our struggles and setbacks, but we should never stop trying to be better than we were yesterday.  Be happy being yourself and help others be themselves too.  Of course pain is unavoidable, but don’t be the one causing it.

Synopsis: A timeless story of human connection and self-discovery, Moonlight chronicles the life of a young black man from childhood to adulthood as he struggles to find his place in the world while growing up in a rough neighborhood of Miami.

SLEEPING WITH OTHER PEOPLE | Movie Review