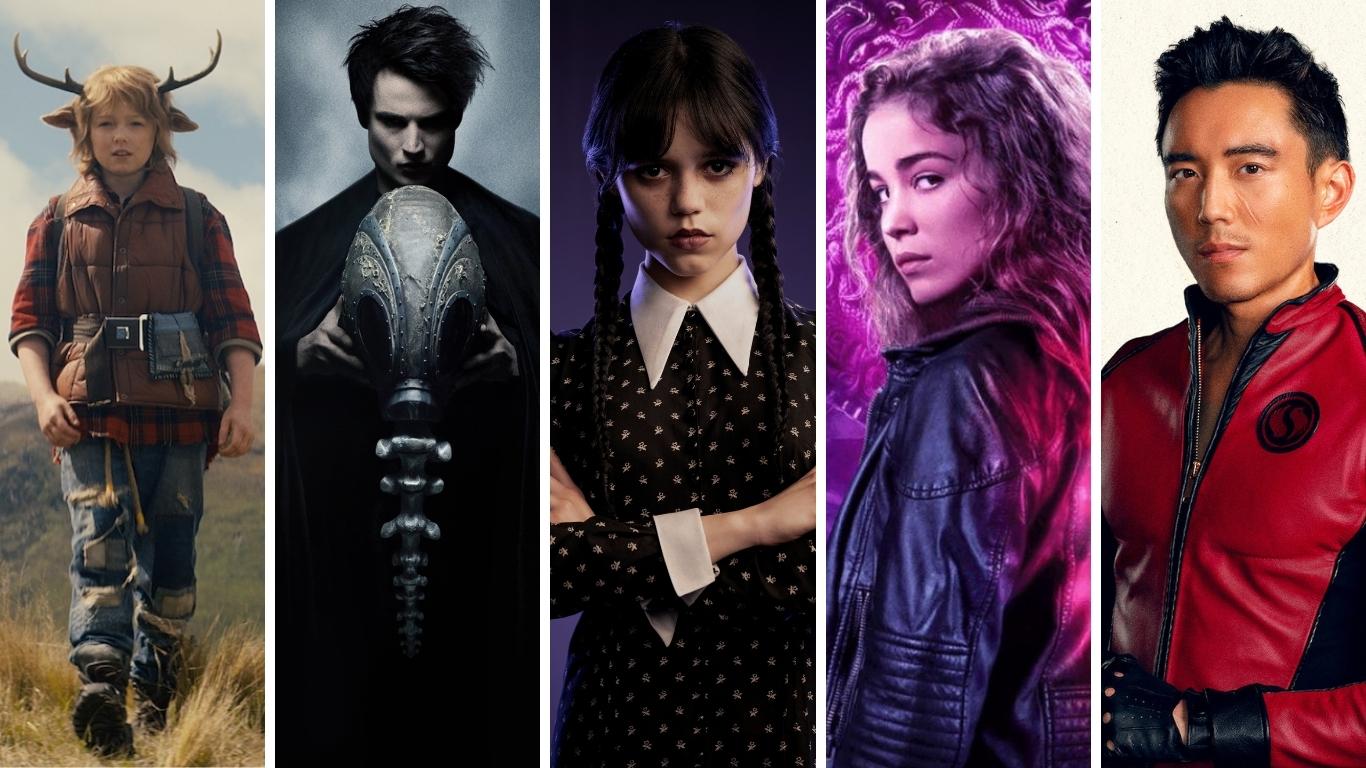 Netflix’s Geeked Week kicked off with an A-list lineup that included Guillermo Del Toro, Neil Gaiman, Mike Flanagan, and even the famed Wednesday Addams. To kick off Netflix Geeked’s five-day virtual event, Series Day hosts Jacob Bertrand and Megan Cruz aka jstoobs spilled the tea on some major breaking news and shared a few eye-popping exclusive first-looks from our new and returning shows.

Wednesday: Get a first look at the creepy and altogether kooky new series, from director Tim Burton, centered on the beloved Addams Family daughter as she navigates teenage life at the gothic Nevermore Academy and a murder mystery with close ties to her famed clan.

Guillermo Del Toro’s Cabinet of Curiosities: The Oscar-winning director gives fans an inside look at his scary and sinister new eight-part anthology series that attempts to challenge our notions of horror. (Don’t say we didn’t warn you.)

The Midnight Club: From Mike Flanagan, the mind behind Midnight Mass and The Haunting series and based on the works of author Christopher Pike, comes a suspenseful mystery about a hospice for severely ill youth where things start to go sideways. Get a first look at the series with this new teaser.

School Tales: See the poster for this Thai horror anthology series, based on eight horrifying comic stories, about what happens at a school after dark. During the day, the school belongs to the students. But at night, it’s a different story. And check out the full Geeked Week Series Day show to see three hair-raising exclusive sneak peeks.

The Imperfects: Watch the new trailer and get a first look at the three outsiders at the center of this sci-fi drama who band together in search of the evil scientist who conducted experiments on them years ago, transforming them into something that isn’t quite human anymore…

Sweet Tooth: Satisfy your Season 2 cravings with this behind-the-scenes update from the cast on location in New Zealand.

Locke & Key: Prepare to return to Keyhouse one last time with the first teaser from the upcoming third and final season.

Fate: The Winx Saga: School is (almost) back in session at Alfea. Get ready for Season 2 with an exclusive first look at new student and fan-favorite fairy Flora, played by Paulina Chávez.

Warrior Nun: If this first look teaser is any indication, Season 2 is not pulling any punches. (Sorry, we had to.).

Shadow and Bone: After kicking off last year’s Geeked Week with a Season 2 renewal, the cast of the beloved fantasy adaptation is back with an update.

Manifest: Buckle up and get ready for the landing you’ve all been waiting for with this sneak peek at the upcoming fourth and final season.

Vikings: Valhalla: Can’t wait for Season 2? Check out the cast as you’ve never seen them before in this fun blooper reel from the historical drama’s epic first season.

Barbarians: If you’re looking to travel even further back in time, step into the Roman Empire with this fresh teaser from Season 2 of the action-adventure series.

All of Us Are Dead: The students of Hyosan High School have a very special announcement that you’ll want to see for yourself.

Alice in Borderland: Are you ready for Level 2? Arisu and Usagi are back to, once again, play for their lives in these new first-look images from the upcoming second season.

ONE PIECE: Prepare to set sail with Luffy and his “Straw Hat Pirates” on their quest for the world’s greatest treasure, the mysterious One Piece, in this behind-the-scenes video from the live-action remake of the biggest manga series of all time. Plus: Meet the latest cast additions, including Langley Kirkwood, Celeste Loots, Alexander Maniatis, Craig Fairbrass, Steven Ward, and Chioma Umeala.

Resident Evil: Get a peek behind the gates of New Raccoon City with the first trailer and poster for the upcoming live-action series based on the hit survival horror franchise.

1899: Check out the first teaser and behind-the-scenes footage from this new mystery series from the creators of Dark, about a group of multinational immigrants traveling from the old continent to the new who encounter a nightmarish riddle aboard a second ship adrift on the open sea.

The Sandman: The premiere date for the upcoming live-action adaptation of Neil Gaiman’s beloved DC comic is (finally!) confirmed. Mark your calendar now and get a first look at the jaw-dropping new teaser.

First Kill: Get a taste of this new vampire and hunter drama about a teen vampire and teen monster hunter who fall in love — just as they’re both ready to make their first kill.