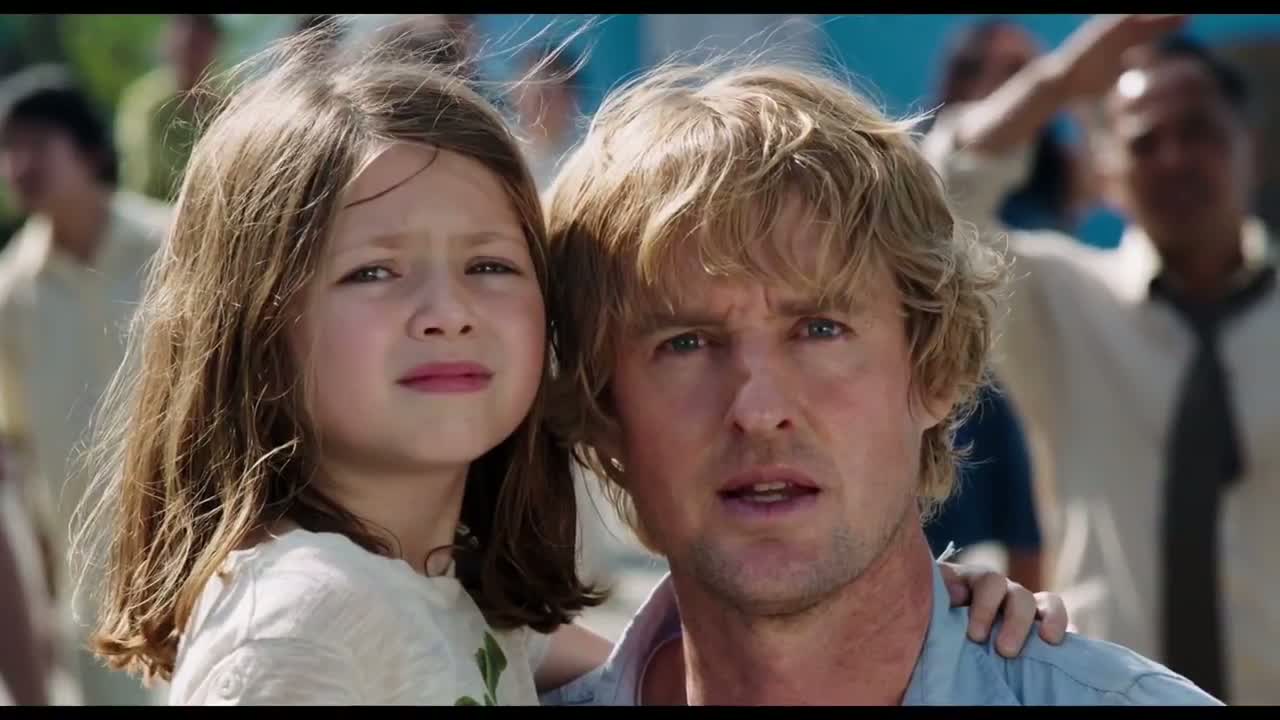 It can be easy to disassociate yourself from a dangerous or traumatic scene as it unfolds onscreen.  You tell yourself it’s just a movie and you can’t imagine ever being involved in a similar scenario.  However there are times when the delivery of the story is so authentic that it rattles you and leaves you with a feeling of unease long after the credits roll.  A feeling that, no matter how improbable it may seem, you and your family being in mortal peril could someday be a reality.  A mother or father would find a scenario like that particularly challenging.  Summoning strength when all that remains inside of you is sheer terror just to keep your children moving forward.  So for a movie to evoke these emotions and ideas, while maintaining its action, pacing, and momentum, is quite an accomplishment.

In No Escape, directed by John Erick Dowdle, Jack Dwyer (Owen Wilson) accepts a job for a waterworks project in an Asian country and brings along his wife and two daughters.  Along the way they meet Hammond (Pierce Brosnan), a frequent overseas traveler who engages in nightlife entertainment and is very savvy about foreign affairs and customs. Hammond’s appearance in the film is minuscule, but still vitally important.  Such an abrupt move for Jack’s family takes a toll on his wife (Lake Bell), who is still processing all the sacrifices she’s made to support her husband.  If that wasn’t hard enough, an assassination of the prime minister becomes the spark for a revolution among the populace, the reasons of which are slightly unknown for most of the movie.  Any recognizable Americans and anyone not directly involved in the revolution are killed on sight.  Jack and his wife Annie have no choice but to find a way out of the country as soon as possible.  They just have to avoid every bullet, tank, and machete in their path.  What makes things even worse is they don’t speak or read the native language so navigating the city is unbelievably treacherous.

There is very little story to this movie.  A family is tasked with escaping a country by any means necessary.  I would have preferred the film provided more detail about the revolution toward the beginning rather than have it explained later, but that doesn’t detract from the intensity of the scenes.  Once children are introduced to an event like this, the anxiety of the moment becomes amplified.  The violence is not guarded or shrouded by editing.  Rather the loud, destructive force of the rampaging mob is displayed brilliantly and can be a lot to handle.  Unlike some disaster or action movies, there is a reassurance that all our main characters, including the children, are safe.  In this film there is no such reassurance and I was terrified for Jack and Annie’s daughters.

I should point at that its never said what country we are in, but based on the languages spoken and geography used for the plot it can be safe to assume its Cambodia.  It was actually shot in Thailand.  In fact the Cambodian government banned the film from being shown in their country after only seeing the trailer.  While the movie does portray widespread rage and carnage, there are plenty of people in the city that do offer help and risk their lives to protect Jack and his family.  It just so happens the city is inundated by radical activists who have decided to resolve their grievances through murder instead of civil protest.

I don’t recall ever seeing Owen Wilson in such a serious role, unless you include Anaconda.  Even his characters in Wes Anderson films are still cradled by a lighthearted narrative that protects the audience from becoming too involved emotionally.  Here Wilson presents himself as a natural, caring father who is trying to keep his daughters alive.  His talent also works well in the moments when it seems his girls might fall apart.  He distracts them with humor as any father would do and that helps us breathe while the movie prepares to throw more mayhem in our faces.

Lake Bell plays a similar role as the protective mother in the movie 2012, holding onto her kids as the world comes undone.  In this movie there are next to no predictable scenes of heroism and Bell’s character Annie provides that counter-strength to Jack, allowing one of them to unravel while the other one takes charge.  Her presence in the film made this family feel real and as such gave weight to the story.

One of the best aspects of the movie is its music, or lack of it.  Much of a movie can seem less real when a thrilling or exciting piece of music accompanies the action.  In No Escape that music is subtle and often hard to hear at all, allowing the moments to grab you and not let go.  When the scene grows silent and all you see is the gunman or an innocent bystander fall to the ground dead as a shot rings out, your heart is leaping out of your chest.  Also the use of different sounds and how they are applied to each scene is well done.  While the violence is not hidden, the scariest moments involve listening through a wall as screams of agony are silenced in another room.  Or the approaching footsteps and voices of activists.

No Escape is a highly dramatic thriller, with so much intensity you’ll need some time to relax afterwards.  Owen Wilson does a remarkable job as the father and convinces me he should take on more roles like this in the future.  Lake Bell is also brilliant and her scenes are just as powerful as Wilson’s.  I should mention as well the children in this film, Claire Geare and Sterling Jerins, who play the daughters Beeze and Lucy.  The performances they bring added so much emotion to the story, besides just being children in peril.  They provided so much innocence and charm that you didn’t want anything to happen to them, yet they are put into some of the most terrible situations imaginable.  Again not having that parachute of reassurance everyone will make it out alive made their presence that much more nerve-wracking.  Lastly I have to give kudos to Pierce Brosnan for playing a side character to this story.  Someone of his talent gave more dimension to that part, which could have been forgettable.  At the same time it was smart not to overuse him as he could have overshadowed the authenticity of the film and made it more of an action film and less an intense thriller with no sure outcome.  There is a political element to the overall story, but that might get overlooked sadly by the violence and destruction.  A reason I didn’t give this movie a full five stars since it could have been addressed better throughout the movie, or at least explained in a title card.  Still if you are engaged by this film as I was, you will be encouraged to learn more about it.

Synopsis: In their new overseas home, an American family soon finds themselves caught in the middle of a coup, and they frantically look for a safe escape in an environment where foreigners are being immediately executed.