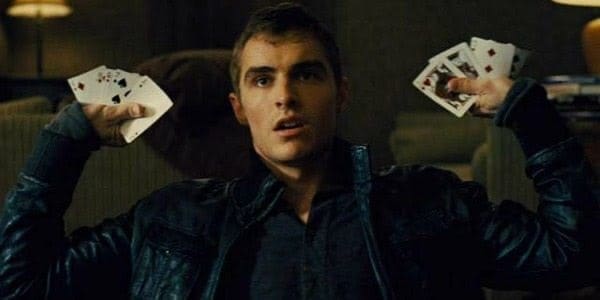 The first Now You See Me was an enjoyable film. It had a great cast that seemed to enjoy filming the movie as much as most audiences enjoyed watching it. However, it wasn’t a movie you expected to see a sequel to. Fast-forward three years and we have Now You See Me 2, featuring most of the same cast, up to their old tricks again (pun intended).

Now You See Me 2 is very similar to the first movie. Three of the four horsemen return, with Isla Fisher’s Henley Reeves being replaced by Lizzy Caplan as Lula. Dave Franco, Jesse Eisenberg and Woody Harrelson all reprise their roles as Jack Wilder, Daniel Atlas and Merritt McKinney respectively. Meanwhile, Mark Ruffalo is back as Dylan Rhodes and Morgan Freeman returns as Thaddeus Bradley. The biggest newcomer is Daniel Radcliffe as Walter, who is the primary antagonist this time around.

To keep things simple, if you enjoyed the first film there’s a very good chance you’ll like Now You See Me 2. The magic tricks are kicked up a notch, and the action is more intense, while the story shifts to the background a bit to make room for all the antics that look almost as though they’re straight out of Mission: Impossible. There’s still an underlying story that centers around Dylan Rhodes and Thaddeus Bradley, but it definitely takes a backseat to the action sequences and flashy magic tricks.

While the four horsemen are back in optimal form (depending on how much you like Lizzy Caplan), their primary adversary, Walter, doesn’t fair as well. Michael Caine’s Arthur Tressler was the main baddy in the first movie, and that’s a hard act to follow. Daniel Radcliffe isn’t a bad actor, but he’s no Michael Caine, and that shows tremendously in this film. It’s just difficult to take him seriously throughout the entire movie, and he’s shown up by almost anyone else on-screen in every single scene he’s in.

Aside from a lackluster villain, there’s plenty to enjoy about Now You See Me 2. The four horsemen are out to reveal the wrong-doings of the business world, while putting on an entertaining spectacle in the process. There are a few twists and turns, especially toward the end, to keep the audience on their toes. While it would be nice if the horsemen didn’t explain everything during the finale, this happened in the first film, so fans should be used to it by now. The entertainment value is high, and the actors are all in top form aside from Radcliffe. If you’re looking for counter programming to Warcraft, you could do far worse than Now You See Me 2.

About Now You See Me 2

Synopsis: The Four Horsemen resurface and are forcibly recruited by a tech genius to pull off their most impossible heist yet.