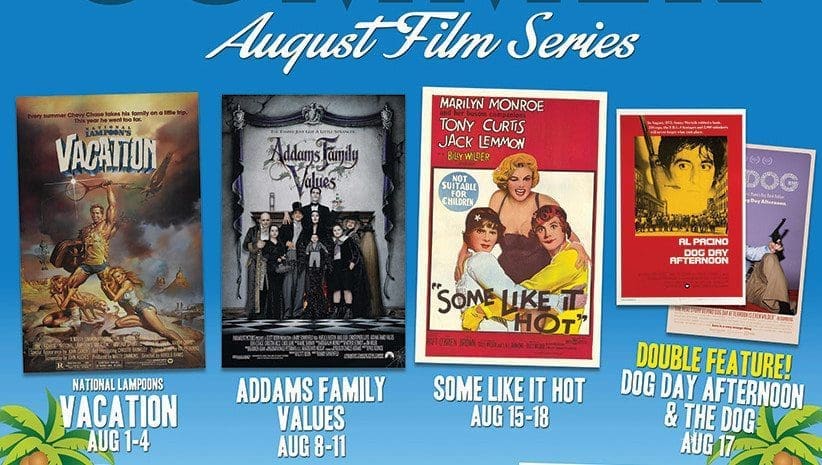 Anything can happen during the dog days of summer

This August FilmBar celebrates summer with fan favorite films that commemorate the fun and frivolity of summer. National Lampoon’s Vacation (with a First Friday Vacation Photo booth), summer camp hi-jinks in Addams Family Values, Marilyn Monroe and her bosom companions in Some Like it Hot. Summer under siege in Dog Day Afternoon and The Dog a new documentary about John Wojtowicz, the inspiration behind Al Pacino’s character in Dog Day Afternoon. Talk Hard in Pump Up the Volume & classic Cusack comedy in One Crazy Summer. Tickets: http://goo.gl/Ond4XE (additional show times added during the month).

National Lampoon’s Vacation. Everything is planned packed and about to go hilariously wrong. The Griswolds are going on vacation. In the driver’s seat is Clark Griswold (Chevy Chase) an Everyman eager to share the open road and the wonders of family togetherness. Friday August 1st with First FridayVacation Photo booth (9-11pm). August 1-4

Addams Family Values. It’s love at first fright when Morticia and Gomez see their new baby Pubert. However, to prevent sibling rivalry escalating to fratricide, Wednesday and Pugsley are shipped off to summer camp and a nanny is hired. But can they stop the evil nanny from filching Fester’s fortune?August 8-11

Some Like it Hot. When Chicago musicians Joe (Tony Curtis) and Jerry (Jack Lemmon) accidentally witness a gangland shooting, they quickly board a train to Florida, disguised as Josephine and Daphne. Their cover is perfect…until a lovelorn singer (Marilyn Monroe) falls for Josephine, an ancient playboy (Joe E. Brown) falls for Daphne, and a mob boss (George Raft) refuses to fall for their hoax! August 15-18

Dog Day Afternoon. Based on the true story about a bank robbery gone haywire one hot August day when two optimistic losers, the frantic master-mind Sonny, and his slow-witted buddy Sal, attempt to rob a Brooklyn bank. The Dog. Filmed over the course of a 10-year period interweaving archival footage on the robbery, 70’s era interviews and the early gay liberation movement in which “The Dog” played an active role, the documentary captures the many sides of John Wojtowicz’s larger-than-life persona: he is, by turns lover, husband, soldier, lover, activist, New Yorker, mama’s boy and bank robber. August 17

Pump up the Volume. A loner student (Christian Slater) from the east enrolls at a highly rated Southwest high school, in a sleepy suburb of Phoenix, Arizona and secretly provokes a mini-rebellion in the student body via his pirate radio station. Also starring Samantha Mathis, in her first feature role. August 22-25

The Endless Summer. The crown jewel to ten years of Bruce Brown surfing documentaries. Brown follows two young surfers around the world in search of the perfect wave, and ends up finding quite a few in addition to some colorful local characters. August 26 & 28

One Crazy Summer. In this madcap comedy, Demi Moore plays Cassandra and John Cusack is Hoops McCann, two people who eventually fall in love. Hoops is a cartoonist working on a teen love story that he hopes will get him accepted into art school. Cassandra is a troubled young woman about to lose her home to a money-hungry developer. They’re out of school, out on Nantucket, and out of their minds. With this crowd, anything can happen! August 29-September 1