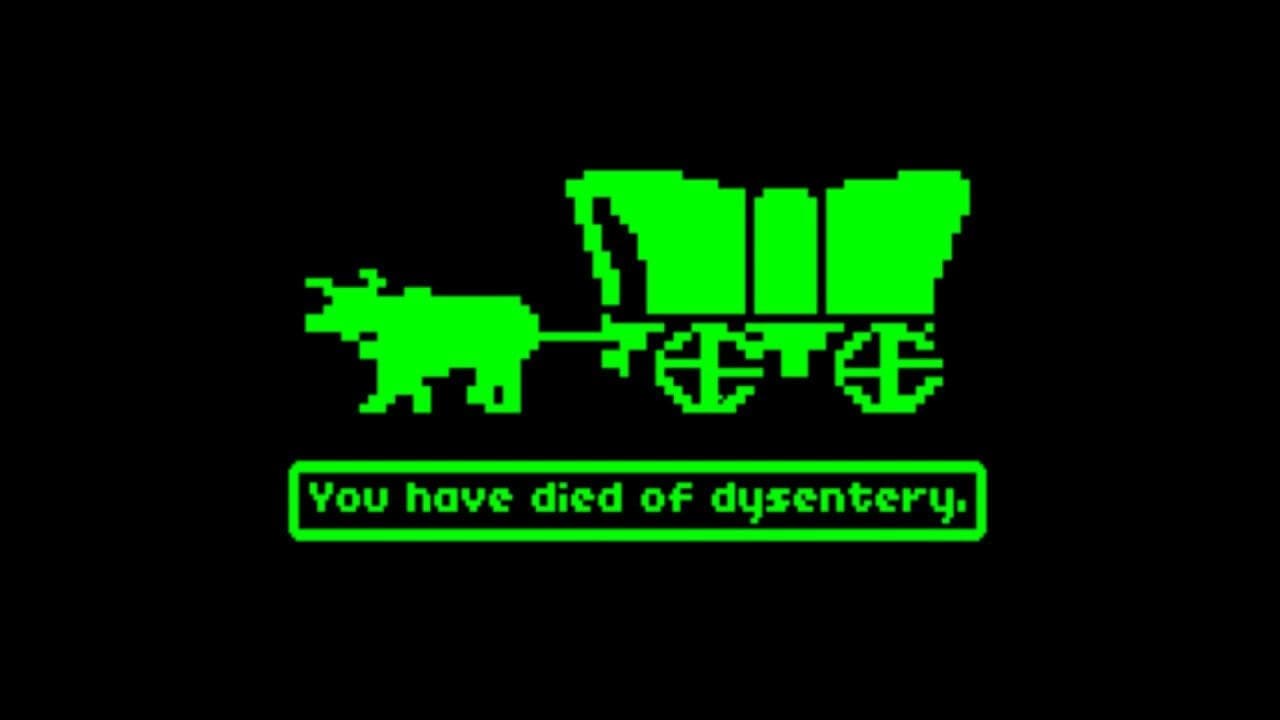 Well, time to hitch up the wagons and start a new game. Such is the way of the Oregon Trail, now available on the Internet Archive, repository of all things DOS.

Starting out was a little difficult. Getting the game to start, that is. It was only posted a few days ago and I figured there’d be a few bugs, but nothing responded to my keyboard commands. I read through the reviews like a good little troubleshooter and the suggestion was to use the number pad for commands, which is exactly what wasn’t working. After reloading the page twice, I decided to go with the regular keyboard numbers and what do ya know, success. So I was off on the Oregon Trail for fun and adventure and possibly dying of dysentery.

The general store is everyone’s first stop and the kindly proprietor of the shop makes suggestions for what the average adventuring party needs. For a 25-year-old game—yes, you read that right—this isn’t a bad tutorial. It’s not as clumsy as it could’ve been and was nearly invisible on the first read through. To me, at least, as I was mostly caught up with the sudden mental math I didn’t remember I had to do for this. Let’s see, twenty cents a pound and I have $720 left… I got my oxen and my supplies and I was off. I started in April and the first message I get: one of your oxen is injured. Of course it is. So now the question becomes stop and rest, or keep going and possibly (probably) kill the poor thing. I rested and had no problems with ox number one, or as I like to call him, Blinkey.

I haven’t played Oregon Trail in years, so I didn’t remember much about the graphics. Surprisingly enough, they were better than I thought they’d be. As we approached the first river I had to cross (more on that later) the curves and roundness of everything made me stop for a second. Maybe it was my less-than-stellar laptop screen, but I remembered games like these being more… pixellated. Sure, I can see pixels, but they’re nowhere near the size of fish tank gravel like I feared, and it didn’t take away from my enjoyment or pull me out of the game. Call it nostalgia or whathaveyou, point is, this particular memory from my childhood isn’t disappointing yet. I’m so happy that worked out.

It wasn’t until day eleven that I was offered the option to hunt for food. Finally! I had plenty of rations and no need to stop, but one thing I remember with crystal clarity was the hunting. It’s my favorite part and I was not about to give up the chance. Time ran out faster than I remember, which was a bummer, but I did get a buffalo and a rabbit. Just like in life, I couldn’t take it with me: No wonder the indigenous people hated us so much.

I went steady for a little while, hunted some more and stopped to look at all the landmarks, listening to the eight bit renditions of America the Beautiful. In game, I’d been on the trail for almost two months and was only a third of the way there. At this point I wanted to take a break, maybe play more later, which brought me to the one big drawback of the Internet Archive: no saving. Reminds me of the old Super Mario Brothers, no saves, beat it all in one go.

I kept going. A few in-game days later and what do you know? One of my party members has dysentery. It’s almost a meme at this point, but it’s still hilarious when it actually happens. I credit Oregon Trail for young me knowing a lot of strange things, like caulking a wagon, what exactly dysentery was, and the odd little prairie-isms the NPCs spit out when you stop to talk to people. Wide open plains, and all that.

The dysentery was just the start. Another member of my party broke an arm, and one of the oxen died a few days later. Someone else got typhoid, and third person got cholera. And I was only half way there. I started hunting a lot more so I could bump rations up to “filling.” Maybe that would stem the tide of disease and disaster. A while later, a thief came in the night to steal one bullet. If he really needed the bullet, he could’ve just asked.

I actually ended the game accidentally. With a crappy laptop keyboard and keys way too close together, I managed to hit escape when I was trying to hit the one to “continue on the trail.” I guess enough was enough. Overall it was fun. If I didn’t have a pile of laundry and dishes and “adult things” I could’ve lost a whole day to the game. I’ll probably lose all of tomorrow.

I would definitely recommend another play of the Oregon Trail to any gamer, not just for the nostalgia. Games have come a long way in 25 years but it’s great to see how old favorites can still hold up. This definitely dodged the Golden Eye bullet (and all the square heads) and brought back fond memories instead of making me cringe at the strange things I used to enjoy when I was a kid. If you never got to play Oregon Trail growing up, I’d definitely pay the Archive a visit. Actually, just go to the Archive for anything, whatever your long-forgotten, guilty pleasure old game, I’m sure they have it.