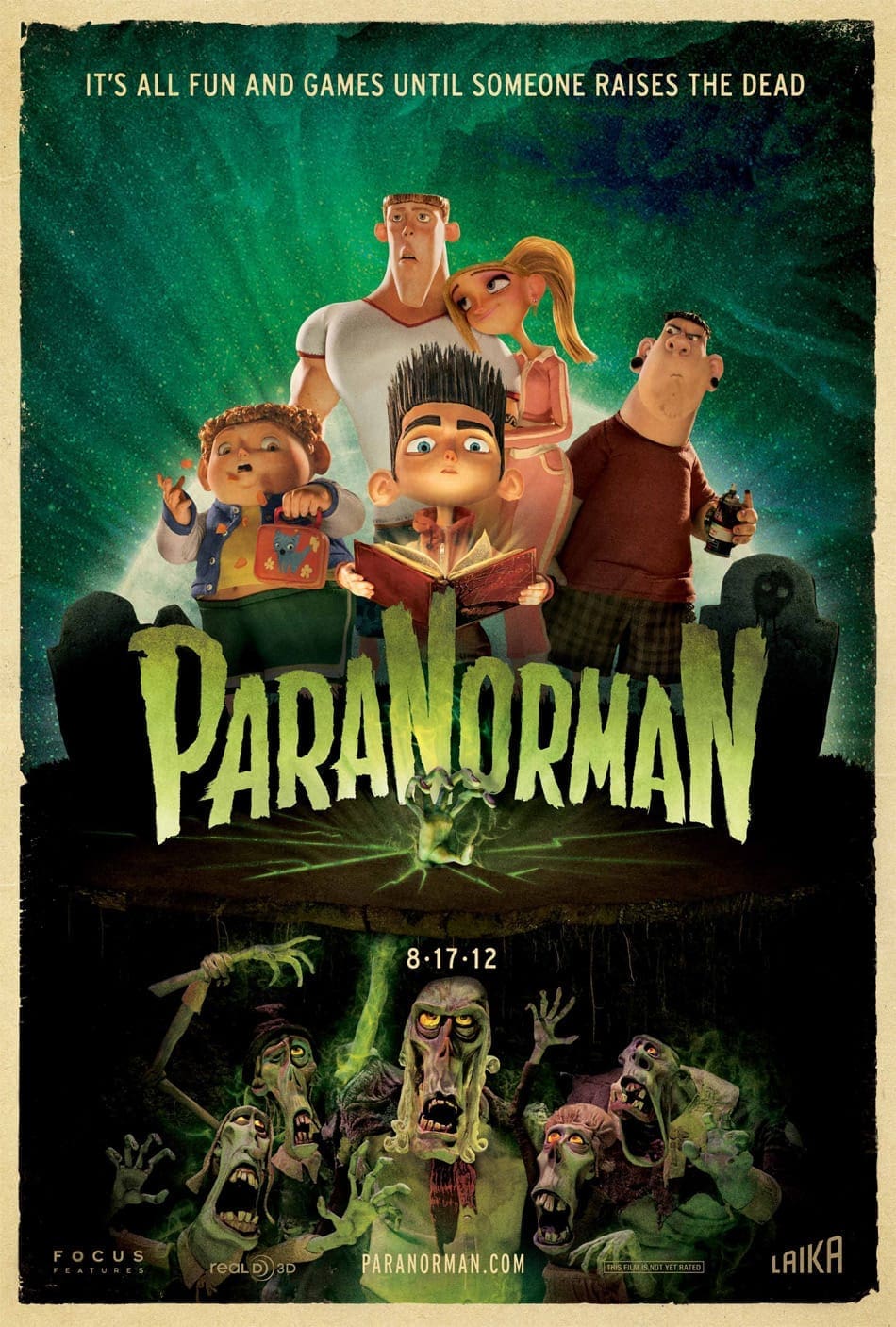 Zombies, witches, and ghosts, oh my. This movie has all three. ParaNorman comes from Laika, the same studio that brought us Coraline back in 2009, and tells the story of little 11-year-old Norman who has the ability to see and talk to the dead. We learn that the town that Norman lives in has a so-called “Witches Curse” and they celebrate it every year. Little do the townsfolk know that the curse is real and Norman’s creepy uncle keeps the witch at bay. Yet when the fat recluse uncle meets his extremely inconvenient death he visits Norman in a bathroom stall and places the tremendous burden of protecting the town with the young one. And so the shenanigans begin.

Let’s start with the visuals. I was excited for this movie because I love those supernatural, Tim Burton-esque movies like The Nightmare Before Christmas, Beetlejuice, Igor, and Monster House. ParaNorman really captures those effects with fluorescent greens and bright purples and reds. There’s also a subtle yellow filter on everything that adds extra ambiance to the whole movie. The character models are awesome and it is by far the most intricate stop-motion movie to date. Frankenweenie doesn’t look half as good as this movie does. The most obvious testaments to that are very subtle. For example, Norman’s drama teacher is a little on the heavy side and whenever she raises her arms her under arm fat jiggles ever so slightly.

I happened to see this movie in 3-D and only because that was the only show time available for my timeframe. Full disclosure: I hate 3-D. You have to wear those uncomfortable glasses that make the picture darker. My main complaint with it is that no one wants to do gimmicky 3-D, you know, where things fly off the screen. The best 3-D movie I’ve ever seen was Beowulf, which came out in 2007, because Robert Zemeckis wasn’t afraid to use gimmicks. This movie just reaffirmed my dislike for the format. It added nothing to the experience. The only cool thing was I got special green ParaNorman glasses. I always like to flip my glasses up during the movie to see what it looks like without the glasses on. I did that a lot during this particular flick. Did I just say flick? Oh well. Usually the picture is completely blurry, during ParaNorman the characters were always in focus and the backgrounds were only slightly blurred. Unfortunately theatres aren’t giving ParaNorman a lot of screen time so you’ll be hard presses to find a show time not in 3-D, but I recommend you save that extra 3 bucks.

The story wasn’t as funny as I thought it was going to be, but beside that the premise is pretty original and entertaining. For those of you wondering, yes, it is dark and sometimes violent and has a controversial plot point that to me felt like they used it just for the shock factor. Unlike Pixar, who makes kids movies that adults will enjoy too, ParaNorman is more like a kids movie for the kids who have a little more mature sense of humor. Think in terms of the original Batman animated series. It also had a very pertinent message about bullying behind it all.

The voice acting was great by all involved, even from Kodi Smit-McPhee who voices the title character who is a young actor, but does an excellent job of voice acting when a lot of veteran actors can’t make that transition to animated movies.

I know there isn’t a lot of family fare out there these days, unless you’re willing to take your kids to Oogieloves In The BIG Balloon Adventure, but let’s be honest, does anyone even know what that is? ParaNorman is an entertaining adventure through the strange and kid friendly macabre with plenty of thrills and scares that the kids (and adults) will definitely enjoy.