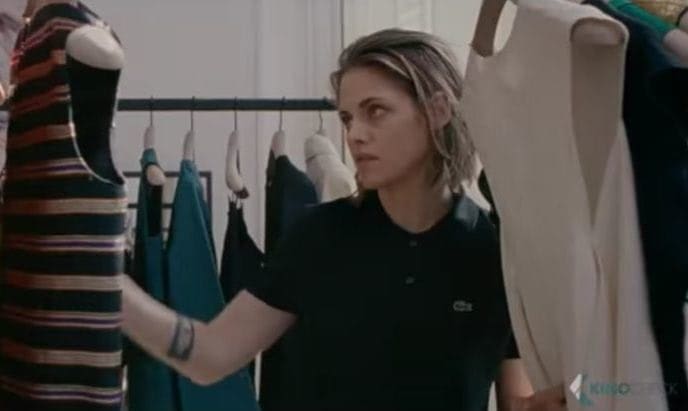 One of the things I like about Olivier Assayas is his ability to give his films a compelling setting for his characters to explore, which allows them to open up organically to the audience.  I enjoyed Clouds of Sils Maria and the tale of an aging actress in a remote village with her assistant.  Sometimes a story can build up from its surroundings and give a character purpose without notice.  The environment can be built by war, intrigue, desire, suspicion, remorse or a number of other narrative devices.  While I was intrigued by the profession that is prominently displayed in this movie, and gives it its title, the overall story left me desiring more.

In Personal Shopper, directed by Olivier Assayas, Kristen Stewart plays Maureen Cartwright, a woman in France working as a personal shopper for an international supermodel.  She purchases clothes and jewelry that her boss is unable to since being in public areas can be unpredictable.  Maureen travels from store to store, sometimes from one country to another, looking over items with great detail and obtaining them for future engagements.  She is instructed only to make purchases, but never to wear the items.  However, as expensive as this merchandise is, you can forgive her a little indiscretion to savor the good life.  Her personal time is spent contacting her brother in the afterlife.  She is a self-proclaimed medium and is convinced she can reach her brother, if she can figure out which spirit is actually communicating with her.  If that wasn’t interesting enough, a mysterious individual has started contacting her by phone, sending her creepy messages that are both personal and alluring.  Unable to identify this person, Maureen is beyond curious and attempts to pursue a private life of seduction, while still also contacting the dead and fulfilling her boss’ obligations.

I found it difficult to stay focused on the main story, but maybe that’s because there wasn’t a main story to stay focused on.  Kristen Stewart’s character is doing things throughout this movie, but none of it ever feels cohesive.  I know it’s somehow supposed to build mystery, but it comes off mundane and repetitive.  The text messages that permeate the latter half of this film are interesting at first, yet over time you realize it doesn’t amount to much.  The supernatural elements of this film are also barely worth mentioning.  The ghost scenes felt forced and unnecessary.  Maureen is a medium so you expect some paranormal interactions.  It just isn’t executed well and the visual effects are more of a distraction and do nothing to help the main story.  Again the main story is debatable; but I would choose to focus primarily on the story of an unsatisfied woman in need of a new life, dabbling in other people’s lives to compensate.

The overall tone of this film is really pleasant.  It doesn’t overwhelm you with dramatic conversations or try to enhance the scene with unnecessary soundtrack.  It works in other movies, but this film succeeds by being quieter and more intimate.  It lets the characters breathe within the context of its simple story and doesn’t throw in anymore plot than it can handle.  It doesn’t work the entire length of the film so you have to go into this with a fair amount of patience.

I don’t mean to stereotype French films, but there are certain tropes that you can’t argue.  Within the first five minutes, someone is smoking a cigarette.  Nothing unusual or specifically French, but having a camera focus on someone smoking at any given moment is a very French technique.  Other familiar checklist items include a pretty girl driving a motorbike, a nonchalant and tasteful nude scene, and a man with lustful intentions that our main character has a passing connection to.  I’m not saying all French films follow this model, but it’s clear French audiences have a type.

I’m on the fence about Kristen Stewart’s acting talent.  I’m not sure she has an abundance of range, but I think the projects she has chosen lately are precisely the ones she should be doing.  She is good at playing someone with a melancholy introspective and her current roles have some version of that.  They aren’t wallowing in self-pity, but they do have this look that says they’d prefer anywhere else but here.

Personal Shopper has several concepts that try to come together at the end, but don’t quite make it.  At least that is my take on the matter.  I’m still trying to sort out how this movie wraps up because the narrative changes into something poetic, meaning open to interpretation.  If you are not a fan of Kristen Stewart’s performances, I’m not sure this will change your mind, but it’s an interesting character study that is unfortunately muddled by plot devices it could have done without.  I’m not sure you will enjoy spending money for this movie at the theater, but it could satisfy a quiet afternoon at home.

Synopsis: Revolves around a ghost story that takes place in the fashion underworld of Paris.