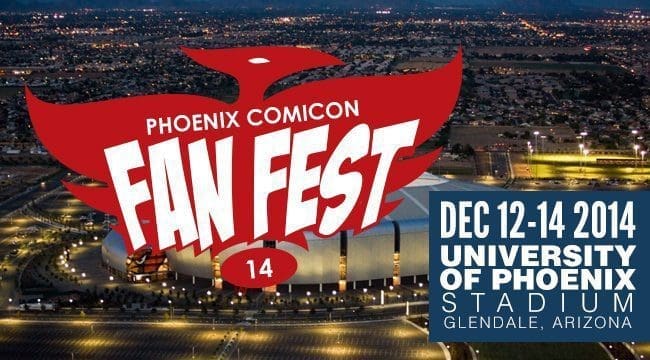 Artist alley is invitation only and is smaller than Comicon, but the talent scheduled has fans buzzing with anticipation. Just a few of the highlights include Jae Lee, Brian Pulido, Brian and Kristy Miller, and Jay Fotos. Looking Glass Wars creator Frank Beddor will be on hand all weekend as well, manning his booth where he will be releasing the 5th and final installment of the Hatter M series as a Phoenix Comicon Fan Fest exclusive release, two months before it drops officially in February.

At this smaller event, Comicon staff will pilot their Fast Pass program. 500 lucky members will skip the long queues for exciting photo opps and autographs for celebs like the original Kyle Reese, Michael Biehn from Terminator and his lovely partner Jennifer Blanc from television like It’s Always Sunny in Philadelphia and Dark Angel. If all goes well, the Fast Pass will be back like The Flash for Phoenix Comicon in May 2015.

A more intimate convention doesn’t mean a lack incredible appearances however. Come early on Friday for Paul McGann and Colin Baker, two of the Doctor’s from BBC’s hit series Doctor Who, enjoy Saturday for David Ramsey, most recently known for his role as Digg from Arrow, and stay Sunday for Exorcists’s Linda Blair and Tom Skerritt most known for Top Gun. Appearing every day of the convention will be Eddie McClintock, hot off of SyFy Channel’s immensely popular Warehouse 13.

This convention promises to be a great close to the convention circuit, pulling some of the best talent from comics and pop culture together one last time for 2014. Memberships are available for purchase online until Dec 11th as both daily and full weekend passes at Phoenix Comicon’s website, and can also be purchased at University of Phoenix Stadium day of. As with all Phoenix Comicon events, Sidekicks (children under 12) are always free with a paid adult membership.

An Interview with Nathan Blackwell of Voyage Trekkers at Phoenix Comicon...