Geek News Network
Home Blog Phoenix Comicon is Kicking Off 2012 With a Bang!! 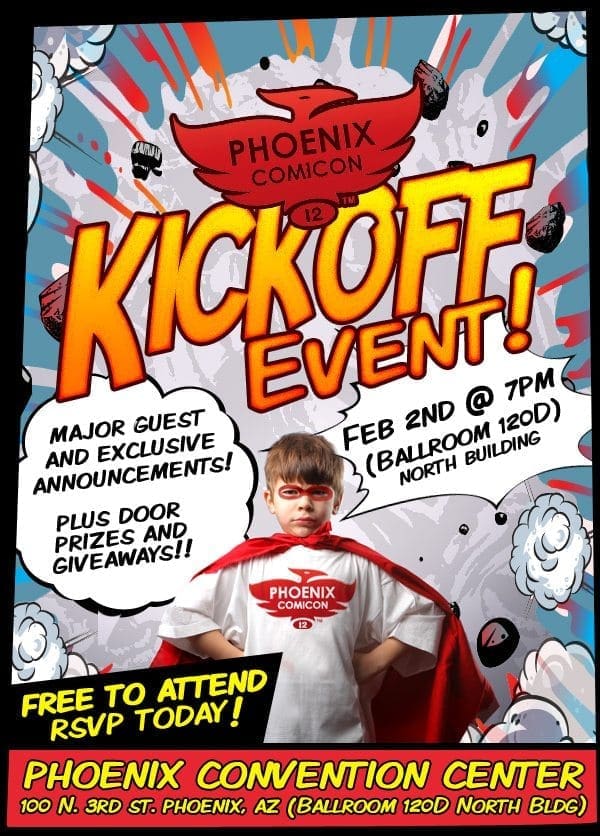 Phoenix Comicon Kick Off Event on February 2, 2012 at the Phoenix Convention Center

Phoenix Comicon invites you to join them on February 2nd for their annual kick off event. The event starts at 7pm at the Phoenix Convention Center, north building room 120D. This is the first major event leading up to the convention in May of 2012 and it promises very exciting announcements.

“Phoenix Comicon 2012 still has a few surprises coming.” said Marketing Director Jillian Squires “The kickoff event will let everyone in on them.”

It will be the first place to hear announcements about new major guests that will be attending the convention. The new announcements will add more guests to the already exciting list for 2012 that includes Ed Asner, Arthur Suydum, Vic Mignogna, George Perez, Jeremy Bulloch and William Shatner.

The event will include door prizes and giveaways through out the course night, however each person should RSVP at www.onsite.phoenixcomicon.com to be entered for the prizes.

The new booklet for the 2012 convention will be unveiled at the event and available to all attendees of the Kick Off event. This exciting booklet includes information on guests, events, and programing for the Comicon. “I am looking forward to seeing what amazing artwork will be on the booklet cover” said Programing Director Joe Boudrie.

The event will begin with a presentation from the Convention Director Matt Solberg that will include a recap of already released guests and many new announcements. There will be information on improvements for 2012 and open volunteer positions. The event will conclude with a walk through of the convention center space being used this year.

Phoenix Comicon is the signature pop culture event of the southwest. Comicon is presenting guests and programming for hobbyists by attracting the top segments of the comics, anime, sci-fi, film, tv, and gaming industries. Entering its tenth year, Phoenix Comicon is expected to draw over 25,000 attendees to its May 24-27, 2012 convention held at the Phoenix Convention Center and Hyatt Regency in Downtown Phoenix. Follow this link here to RSVP for the event!!!

This really is some thing I must find more information about, thank you for the post.