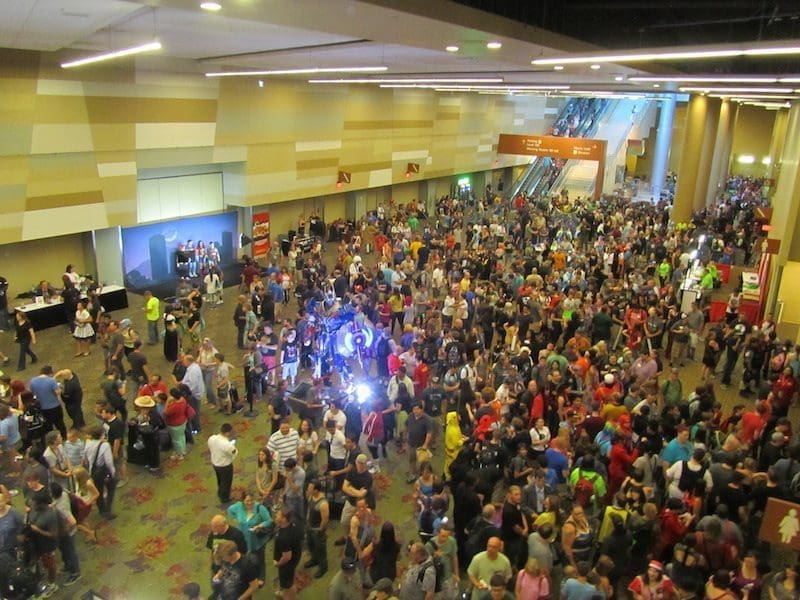 Phoenix Comicon is growing up. What began in 2002 as a small, one-day convention has ballooned into a four-day extravaganza, not only filling the Phoenix Convention Center (and some of its surrounding buildings and hotels) to capacity but consuming downtown Phoenix the way the mighty Galatcus would devour an entire planet. Phoenix Comicon director Matt Solberg and his staff of volunteers have definitely risen to the occasion to compliment that growth in the recent years, evolving the convention to meet the demands of the attendees and reflect their suggestions on how to make Phoenix Comicon even better. That holds true in what I experienced this past weekend where I saw implemented changes both major and minor, for good and for bad, but all part of a necessary evolution to help contain a convention that’s only getting bigger every year.

Registration was the big shift for Phoenix Comicon 2014, moving from the previous North Building to the South Building. While the message of the change to the registration location unfortunately did not seem to get out there in time for a lot of incoming guests (judging by the clutter between the two buildings), the move to the Phoenix Convention Center’s South Building resulted in not only the smoothest registration to date but allowed the North Building’s downstairs facilities to be entirely dedicated to vendors, artists, and the like. Speaking of the North Building, foot traffic was also successfully managed in a minor change that forced guests to use separate escalators around the North Building for moving upstairs and downstairs. Last time I was in the North Building on Saturday during Phoenix Comicon, I came to a dead stop while attempting to get up a set of escalators also occupied by convention goers attempting to go the opposite direction, so having each set of escalators moving in only one direction helped the flow of traffic immensely. One change that was not so successful, however, was funneling the ravenous Phoenix Comicon crowd through the set of double doors across from the West Building. During the convention’s busiest times, I felt like a cow being herded for slaughter, shambling through one of the North Building’s few entrances with hundreds of others in tow.

Despite its increased volume of attendance, Phoenix Comicon’s best-kept secret remains Thursday night. Although this is technically a “preview night” before the event is up and in full swing, it’s absolutely worth going on this day if only to pick up a badge (to avoid waiting in a longer line on Friday, Saturday, or Sunday morning) or nab a limited exclusive item from one of the hundreds of vendors (before they sell out). It’s also the cheapest way to experience the Con and witness it during a less frenzied state. Having walked the vendor hall on Thursday, Friday, and Sunday (thankfully I avoided Saturday), Thursday was the ideal time to spend a few hours seeking out artists, purchasing cheap collectables, or just generally getting the lay of the land to avoid getting lost when the crowd picked up throughout the weekend. And it did, considerably:

Even though the namesake of conventions such as these are rooted in the comic book industry, I’ve found that ironically enough, comic book writers and artists are not nearly as swamped with guests as the celebrities that come from the worlds these writers and artists have created. With the exception of X-Men writer and comic legend Chris Claremont, nearly all the comic book men and women filling the North Building at Phoenix Comicon 2014 were without lines, allowing for an ecstatic fan like me to walk right up and purchase up a print (usually $20 or less), get a signature (usually free though donations were encouraged), and chat (always free, always a good time). Thursday and Sunday provided the best opportunities to do this, and while I would loved to have met with more comic book contributors, I sought after the three most important to me: Tony Moore (Walking Dead), Francis Manapul (Detective Comics, The Flash), and Bryan Q. Miller (Batgirl, “Smallville”). All three were incredibly gracious and more than willing to autograph whatever was put in front of them (Moore had a $5 fee, but no one draws zombies like he does so it’s allowed). Moore was even willing to sign a variant cover of My Little Pony from artist Agnes Garbowska (who was just a few tables down) modeled from Moore’s iconic Walking Dead #1 design. There wasn’t an artist that I saw that was dismissive or unappreciative. Sketches were also done by many artists at their tables, with a select few offering free sketches to kids (and kids at heart).

Comic book companies held a big presence over the Phoenix Comicon show floor as well with many authors and artists doing signings at each booth over the course of the four-day show. Larger companies such as Dark Horse, Boom Studios, and Valiant shared the floor with up-and-coming publishers like Big Dog Ink and Spiral Ink Comics. It was great to talk to each of these booths and hear all the positive energy that these companies were putting out to their adoring fans. Just stepping into the Valiant booth for a minute, I was immediately asked if I was familiar with the Valiant line by an enthusiastic representative that was eager to tell me all about their titles. But the comic book reach extended further than just the companies to the vendors as well, with many local comic book shops set up around the show floor selling all sorts of comic paraphernalia. As someone that has recently taken to collecting the Funko Pop! vinyl figures, I was enamored with the seven-foot-high displays that I saw while shopping around. Whereas Thursday offered a first crack at some of the wares that are being sold around the convention, Sunday offered a load of discounts; several comic book vendors were selling their products for 75% by midday on Sunday. One of the many purchases I made on Sunday was for various issues of Bryan Q. Miller’s Batgirl run for only $1 an issue.

If comic book collecting isn’t the sort of thing that tempts your wallet, the vendors at Phoenix Comicon vary so immensely that there’s something nerdy for everyone. Whether it’s something as simple as a statue of various comic book heroes and villains or as specific as a handcrafted gaming table, Phoenix Comicon had it this year, and I can’t imagine the list of vendors is going to get smaller when the convention returns next May. Prices for these various items varied by vendor; from what I could see, most of the items were comparable to prices found online. T-shirts were the only major disappointment, as I couldn’t find a stand selling them for less than $20 a piece. To be fair, these were T-shirts in all shapes, sizes, and nerdy denominations, but nothing stuck out to me as something I hadn’t seen elsewhere. Nevertheless, there were plenty of unique items to be found among the vendors at Phoenix Comicon, the most outrageous that I saw being a stand specializing in codpieces. Because nothing protects your dynamic duo more than a codpiece emblazoned with the Batman logo.

Phoenix Comicon continues to prove itself as a hub for all things geek, and in 2014, I witnessed that hub grow in order to cater to an ever-growing crowd. In part two of Geek News Network’s Phoenix Comicon coverage, you’ll see the celebrities that drew so many droves of con-goers to this year’s massive four-day event.

Mr. Grey will see you now – FIFTY SHADES OF GREY...