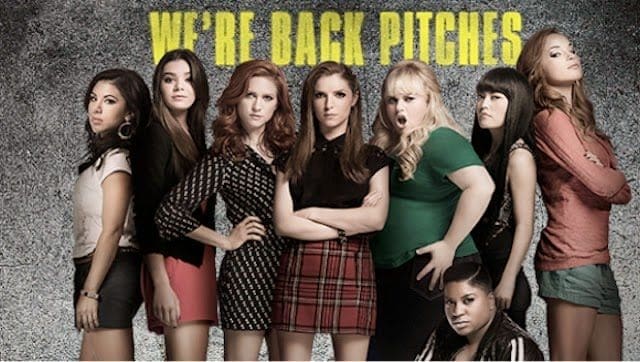 The first Pitch Perfect is a movie about girls bonding, growing and coming together for something amazing. The sequel, Pitch Perfect 2, takes everything that was fun about the first movie and ramps it up tenfold, but misses out on the plot details. It’s a lot of fun, but don’t go into it expecting a deep plot, or even one that makes sense. This is like what Furious 7 is to the rest of the franchise, a movie that is insanely fun, but over the top ridiculous at the same time.

All of your favorites from the first film are back in action for the sequel. Beca (Anna Kendrick), Fat Amy (Rebel Wilson), Chloe (Brittany Snow), Stacie (Alexis Knapp) and the rest of the gang. There are a few surprises I won’t spoil here, but rest assured everyone you want to see is back and amped up considerably. Even the jokes from commentators John (John Michael Higgins) and Gail (Elizabeth Banks) have been kicked up a notch to be as offensive as possible (and also pretty funny).

The movie kicks off with a very strong start that continues throughout the first act and well into the second. If you’re not smiling and laughing every minute or two for the first half of the movie then you belong with the loonies over at Mad Max: Fury Road. It’s not until it’s time for the girls to grow and find themselves again that the movie starts to stutter. Even here there a few good laughs, but after such a strong start this lull feels almost unbearable. The finale picks up the pace again, but the movie never quite gets back up to where it was during the first act.

There are plenty of guest appearances in the film that add considerably to every scene they’re in. I won’t spoil the fun, but there are some recognizable names that show up and really kick things up a notch. Some have larger parts than others, but each one is thoroughly entertaining. Even Keegan-Michael Key from Comedy Central’s Key & Peele show has a role to play as Beca’s boss. If you’ve watched any of Key & Peele you should already know that he steals almost every scene he’s in. In short, the casting for Pitch Perfect 2 is fantastic.

We don’t know if there will be a Pitch Perfect 3, but this movie definitely feels like a passing of the torch. While all of your favorites from the first film are back, the Bella’s get into trouble early in the movie and are not allowed to recruit any new members. They find a loophole to bring in Emily (Hailee Steinfeld) as the sole new addition to the group, but it’s clear that if a third film were to happen, Emily would likely be the starting point of a new group. It doesn’t help that everyone except Emily is a senior in the movie.

The main rivals for the Bella’s are the German group, Das Sound Machine (DSM). They’re led by Kommissar (Birgitte Hjort Sørensen) and Pieter Krämer (Flula Borg). As the “villains” of the film, both have a commanding presence whenever they’re on-screen. They are intimidating and the entire DSM group offers some of the best performances in the film. DSM outshines the Bella’s on more than a few occasions and it would be great to see them return in a future film.

Aside from the lull in the middle of the film, there isn’t much to complain about when it comes to Pitch Perfect 2. If you enjoyed the first one for the songs and over the top humor, you should enjoy Pitch Perfect 2 even more. However, if you’re looking for a little more meat in your movies, you may not find that here. It’s a fun and highly entertaining film, but the plot falls short in many ways. Still, there’s plenty of “aca-goodness” here that should entertain most movie-goers.

Synopsis: After a humiliating command performance at Lincoln Center, the Barden Bellas enter an international competition that no American group has ever won in order to regain their status and right to perform.

I feel like the snappy and unexpected humour from the first movie was
recycled and stressed to the point where it no longer felt original.