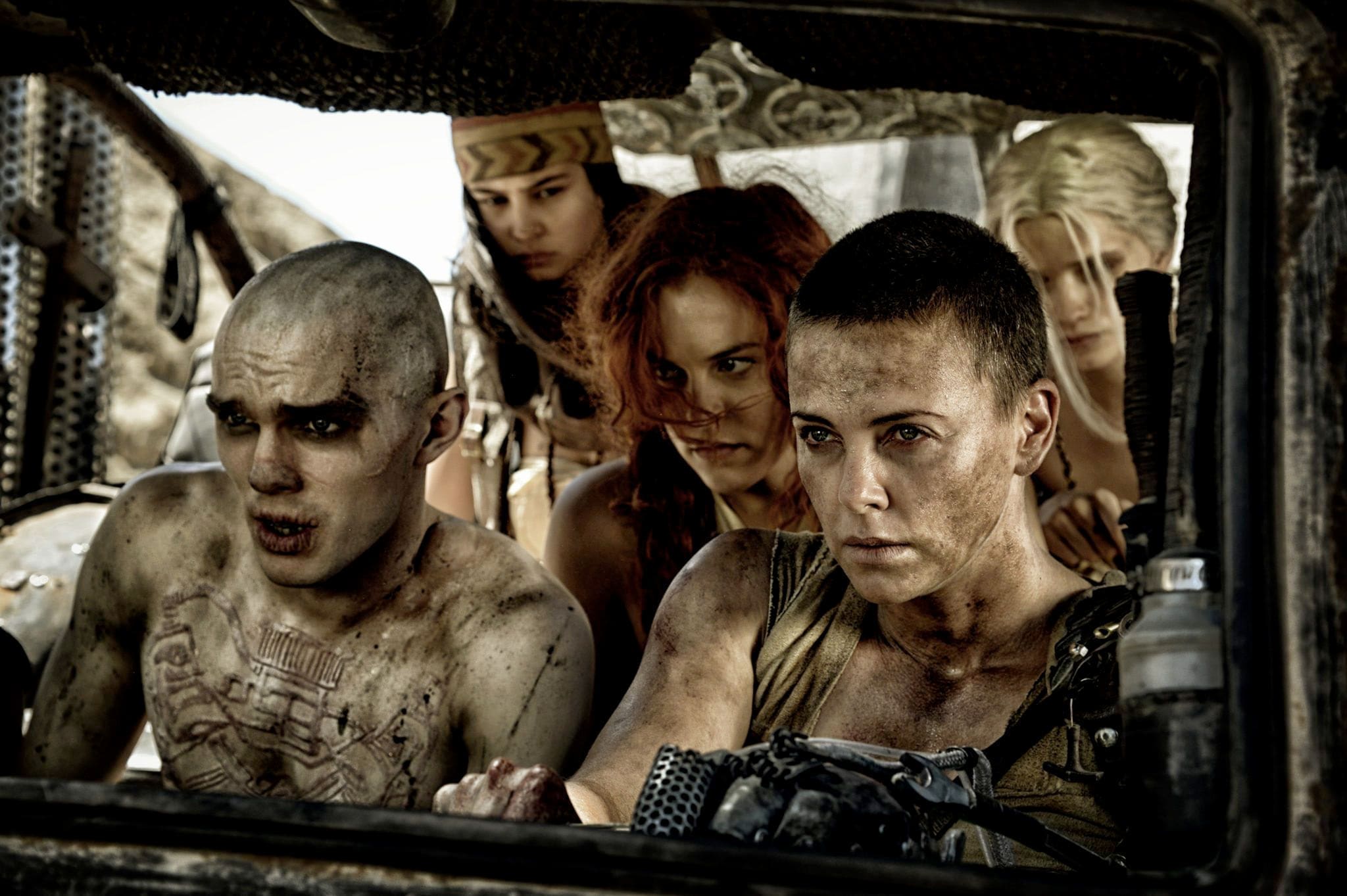 The best action movies give us someone we can root for and keeps us invested in their outcome.  It also provides villains that are memorable and almost impossible to get rid of, which makes you excited when they do finally get it in the end.  Take all that and include a kinetic, heart-pounding soundtrack, a violent wasteland, and thirst, and you have a wild ride ahead of you.

In Mad Max: Fury Road, directed by George Miller of the original trilogy, Max (Tom Hardy) is captured by an army known as the War Boys, led by Immortan Joe (Hugh Keays-Byrne), a terrifying, sickly man who commands his kingdom in the desert by withholding the only known water supply.  Joe’s subjects grasp for any drops that may fall from the pipes high up on a mountainside.  When one of Joe’s Imperators, Furiosa (Charlize Theron), is sent out on a run to fetch more oil from a local refinery, she decides to use the opportunity as a means to get Joe’s imprisoned concubines to safety, prompting a huge chase to bring them back.

The only reason Max is brought in on the hunt is because a crazy, loyal War Boy named Nux (Nicholas Hoult) is too sick and needs Max’s universal blood to remain stable.  So with Max strapped like a hood ornament to Nux’s assault vehicle, and an IV line running from his neck into Nux’s body, he can now join the full-scale attack.  Cars, vans, tankers, and motorcycles are involved, equipped with all manner of incendiaries, flammable liquids, firearms, and sharp objects.  Immortan Joe even calls in help from nearby armies, instructing everyone not to harm his precious ladies.  With War Boys using the fuel in their vehicles as explosives, they make their way to Furiosa’s rig in the hopes of bringing it down by blowing themselves up.  Spears are thrown about while bullets go flying from all directions and, if that isn’t bad enough, a giant, violent dust storm is quickly approaching, which Furiosa uses to escape.  It also allows Max to be free from the vehicle he was strapped too.  Unfortunately he is still chained to Nux; and has some nice metal headgear welded around his face as a souvenir.  When he locates Furiosa and the girls, he is coerced into joining their quest, after they free him of Nux.

In this movie the journey is the destination.  It doesn’t much matter where they are going because all you want to see is who or what they turn up against next.  The encounters are so outrageous, but you are completely engaged in the action.  It’s a world of maniacs trying to hold onto whatever is left of it.  Luckily there are people like Max and Furiosa trying to protect those that have lost hope.  What’s fun is how excited the characters chasing them appear to be.  Life in the desert must be pretty boring and a hunt like this doesn’t come very often I’m guessing.  You see War Boys hurl themselves at the rig without any hesitation.  They also spit fuel directly into an engine so they can get a little more speed out of it.  One of the craziest things to watch is a musician playing a guitar that shoots flames in front of a wall of speakers and drummers beating behind as well.  Bringing musicians into battle is a very old tradition that encourages morale among the troops.  I imagine these guys are doing the same thing, while also allowing the characters to hear the same soundtrack we are.

My favorite part of the movie is meeting a tribe of old women who have managed to fend off all attackers and join up with Furiosa and Max.  They are fierce, intimidating, and whenever they take out a War Boy it brings a smile to your face.  In fact one of the things that’s nice to see is how age is not a factor.  The enemy has old guys in charge and the good guys have old ladies that can hold their own.  It’s not a film filled with twenty-somethings which I appreciate.  Usually in recent films, the younger characters get all the action scenes and the older ones just provide wisdom or some adversarial dialogue.  Not in Fury Road.  After one nasty bad guy goes blind, he just wraps his head up and fires aimlessly into the desert seeking his prey.  It’s just one example of how people in this movie, with otherwise debilitating physical attributes, use what abilities they do have to incite fear and chaos.  These dedicated individuals add another layer of insanity to an already beautiful action film and will have your eyes glued to the screen.

Much of my enjoyment of this film is derived from the sharp editing, the sound effects, and the real car chases.  CGI was used in the movie, but the chases were real.  When cars moved around each other or fell over, physics was not compromised.  It added authenticity to the action and made your adrenaline increase as a result.  Charlize Theron is excellent as Furiosa and probably had more screen time than Max even.  Although it seems more like Furiosa’s story with Max along for the ride.  Max is like an Australian Clint Eastwood, stumbling across danger and doing what he can to wipe it out before moving onto the next town.  Tom Hardy is great as Mad Max, replacing Mel Gibson for this new saga.  I’m glad original director George Miller came back to continue his own franchise.  There are occasions where that’s not a good thing, George Lucas, but in this case it worked out perfectly.  Miller’s presentation of intense action is a work of art.  Mad Max: Fury Road is a new story that doesn’t require you to have seen the previous films, now over thirty years old.  It’s a wild adventure you have to be ready for, and if you aren’t, you’ll find yourself left in the dirt as the rest of the cars go barreling through the desert.  So strap in and be prepared to have a lovely day.

Synopsis: In a stark desert landscape where humanity is broken, two rebels just might be able to restore order: Max, a man of action and of few words, and Furiosa, a woman of action who is looking to make it back to her childhood homeland.

The Space Between Us | Movie Review