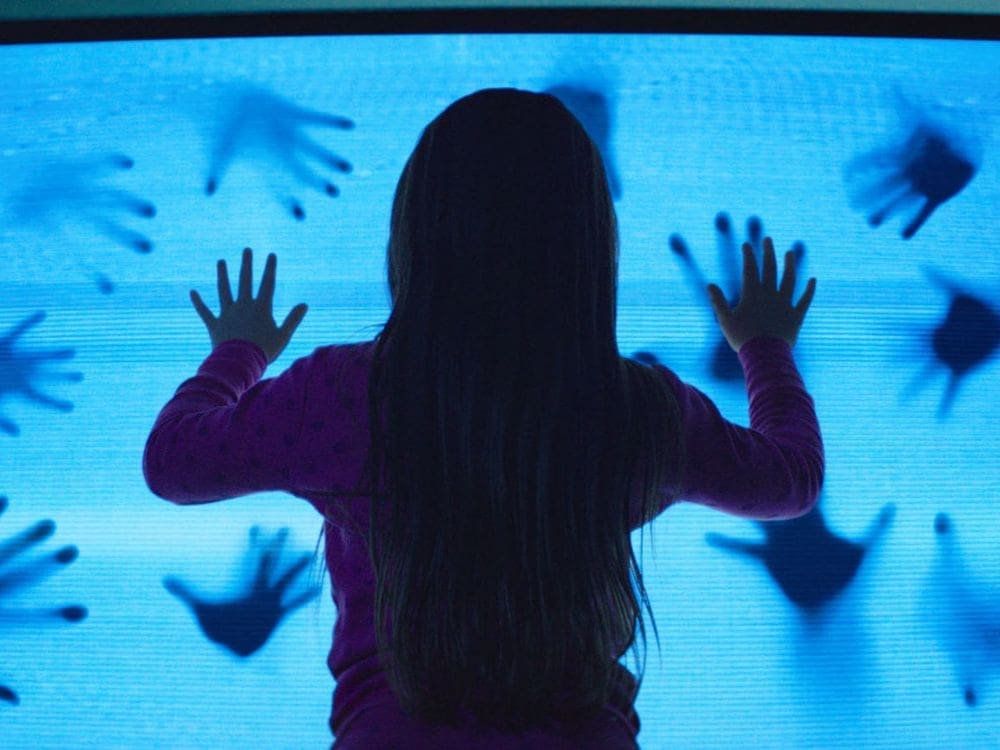 I can’t tell you how much I love and admire Tobe Hooper’s Poltergeist from 1982.  He created a terrific atmosphere that built suspense slowly and knew when to hold back and let the audience imagine their own worst fears in the silent darkness, lit occasionally by a flickering television.  When it was ready to scare you, it let you have it, including the use of actual human skeletons.  The Freeling family felt genuine and endearing, courtesy of Steven Spielberg’s script.  There was a warmth to the film and because the family felt so warm and inviting, it made it even more frightening when something strange would jump out or move across the screen.  Carol Anne became a household name, which must have been horrible for little girls called that at the time.

Poltergeist became part of pop culture with all the memorable lines and characters.  It went on to have two sequels that weren’t nearly as beloved and made the mistake of delving too far into the supernatural origins of the first film, effectively ruining the mystery that horror movies thrive on.  It’s almost always better to let an evil entity go unexplained so the audience can worry about it showing up later.  No better examples of this can be found than in the films that pay homage to Poltergeist, such as Insidious and The Conjuring.  Worthy heirs to the paranormal genre.  So if a film classic such as this one is so revered, you’d think Hollywood would do what it could to make a decent remake.  One that doesn’t have to be on par with the original, but at least develop original scares inspired by its predecessor.  So what the hell happened?

Let’s start by saying Gil Kenan never set out to direct a horror movie.  He was hoping for a family adventure that had some scares in it, perhaps similar to his previous efforts on City of Ember and Monster House.  In this new Poltergeist, the Bowen family are looking for a new home after the father Eric (Sam Rockwell) gets laid off.  They settle on a very affordable place that their realtor is eager to sell to them.  The neighborhood also happens to reside on a former cemetery.  Eric is a father who quickly dismisses strange occurrences in and around their home and is more concerned with distracting himself from his financial woes.  His wife Amy (Rosemarie DeWitt) is the more levelheaded of the two and tries to keep the family on track.  Older daughter Kendra is the typical modern teenager, attached to her phone and uses social media to communicate with her friends.  Her sister Madison is impressionable and talks to imaginary friends.  Last is the son Griffin, a kid scared of his own shadow and poster child for therapy.  Over the course of several nights, the family endures terrifying encounters with ghosts, inanimate objects, and maddening hallucinations.  When Madison goes missing and only her voice can be heard near the television, the Bowens decide to reach out to a paranormal research group.  A group that eventually includes a television personality by the name of Carrigan Burke (Jared Harris).  Carrigan has a gift for ridding homes of their paranormal afflictions, but it remains to be seen if his abilities are more than just pure entertainment.  It’s explained to Eric and Amy that the longer their child remains in the spirit world, the less chance they have of bringing her back.  With time not on their side, they make every effort to get to that other world.

The largest grievance I have to levy against this film is its script.  Neither fun nor interesting, it chooses to lift exact lines from the original throughout the film.  While that doesn’t seem so bad an offense, the delivery of each familiar line just falls flat.  There is no effort to use the same line in a new and exciting way, and when it’s attached to a familiar scene you wonder if the writer (David Lindsay-Abaire) even tried to find his own vision.

The special effects in the 82′ Poltergeist don’t hold up entirely, but the practical effects really do.  Something this Poltergeist chose not to use, probably due to money constraints.  In some respects using computer effects is easier and even more effective when portraying paranormal activity, but you can always tell when it’s overused and the movie begins to look like a video game.

What little story this movie has it rushes along incredibly fast.  It almost assumes you saw the original and would understand all the beats.  Why would there be a portal in the house that leads to another dimension and why are they filling up a bathtub?  The 82′ Poltergeist gave you a ride that was eerie and exciting and when it got too strange one of the characters would take the time to explain the phenomenon so we the audience could at least follow how things work.  Remove those explanations and you not only lose character development, but also emotional investment.  The only thing you have to lean on for entertainment is Sam Rockwell’s quips.

I honestly don’t mind that they chose to go more of an adventure route rather than focus on the horror because Poltergeist always seemed to have that roller coaster element to it.  Especially near the end.  I just wish the adventure had more to it.  Yes I was happy they expanded on the weird dimension where the spirits live and somehow communicate by electricity, but it never built up anything beyond the visual aspect.  The family is struggling to make ends meet and conflicts usually arise as that continues, but all that falls to the wayside once the ghosts show up.  The only real development can be attributed to the son Griffin, played by Kyle Catlett.  He is the biggest coward in the family and he is faced with the real dilemma of losing his sister, as well as his sanity, or facing his fears head on.  It adds depth to the plot, but not by much.  Mostly the film is too busy trying to sneak in recognizable references rather than stand on its own cinematic feet.

I can’t recommend Poltergeist for horror fans other than to make them love the 82′ version even more by comparison.  This one does have a few scares worth mentioning, but all early in the film.  Otherwise it feels lazy and by the numbers.  It does have a more modern atmosphere, which can appeal to a younger audience, and there is a roller coaster of fear action sequence that builds at the end, much like the original.  Although I’d say it’s probably better not to get on this ride at all.

Synopsis: A family whose suburban home is haunted by evil forces must come together to rescue their youngest daughter after the apparitions take her captive.