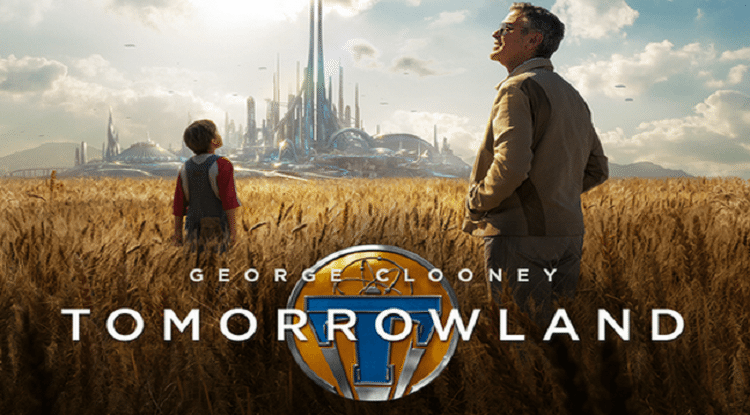 Watching the trailers for Tomorrowland, Disney made me feel as though the park attraction was coming to life. I thought I’d get to see and live in the futuristic world, even if it was only for a mere two hours. It made me think of the Pirates of the Caribbean movies and how that ride came to life so well on the big screen. Unfortunately, that’s not how Tomorrowland worked out, and instead of leaving me with the magic of the future in my mind, it just left me wondering what happened.

Tomorrowland kicks off with a bang. Early in the movie we get a decent glimpse of the futuristic world and at first you assume it’s just a taste of what’s to come. While we do see it again a bit later in the film, these are the only two points in the movie when the audience truly gets to see the wondrous splendor of Tomorrowland. Most of the movie takes place in the real world, building up to what’s sure to be a fantastic climax, but it just ends up being a bit of a letdown instead.

George Clooney plays the main character in the film, Frank Walker. Frank experienced the best and worst of Tomorrowland and he’s our main link to that world. Clooney does a great job playing a character that he seemed very familiar with. He’s always convincing and even adds a considerable amount of humor to the film.

Britt Robertson plays opposite Clooney as the young adventurer, Casey Newton. Casey is our link to the real world and the only hope to save Tomorrowland. Unfortunately, Robertson’s performance was a bit of a disappointment. In some cases she lights up the screen and really pulls the audience in, but more often than not it feels as though she’s overacting. Her performance just doesn’t feel real and instead gives you the sense she’s trying too hard.

The two are brought together by Raffey Cassidy who plays Athena in the movie. Cassidy steals the show almost every time she’s on-screen. She is easily the best piece of the Tomorrowland puzzle and plays off of every character very well. She’s the highlight of the film and even pulls some of Robertson’s scenes out of the gutter. She’ll definitely be a name to watch for in the future.

The main issue with Tomorrowland is simply that we don’t get to see enough of it. The audience gets a few quick teases early in the film, but when it’s finally time to remove the veil and show us Tomorrowland, it’s too little too late. There’s a constant build-up throughout the film, a constant sense of wonderment, and the audience never gets to experience a proper payoff. It doesn’t help that young Casey Newton is supposed to be highly intelligent, yet continues to run into walls and perform other mindless acts unfitting of the character.

Tomorrowland spends a lot of time building up to the finale, but then seems to rush through it without much explanation. There are a few nice cameos from Keegan-Michael Key (Hugo) and Kathryn Hahn (Ursula), and Matthew MacCaull plays a convincing evil enforcer as Dave Clark. Even Hugh Laurie plays a fairly thorough antagonist in Governor Nix. It’s just not enough to override the faults in the script.

One thing Tomorrowland has going for it is that it feels very much like a Disney film. Older movie-goers may even feel like they’re back in the 80s with how some of the action sequences play out. There’s a lot of hope and a lot of wonder, and while that’s not always rewarded, this is a Disney film through and through. Tomorrowland would’ve been better if more of the film had taken place in the shiny, futuristic landscape, or if the build-up had paid off, but as it stands this is a movie you can catch on cable without missing too much.

Synopsis: Bound by a shared destiny, a teen bursting with scientific curiosity and a former boy-genius inventor embark on a mission to unearth the secrets of a place somewhere in time and space that exists in their collective memory.

After Who: The Day of The Doctor