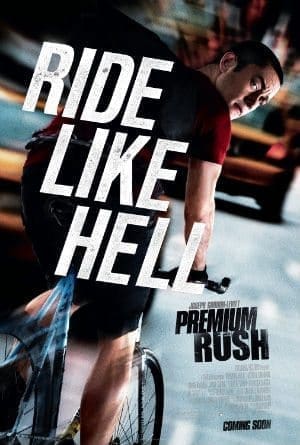 Thank goodness August is almost over. It’s that lull in-between summer movies and the awards season movies. A dumping ground for studios with movies too boring for summer and not boring enough for Oscar voters. Premium Rush falls neatly between those two spectrums. It tells the tale of bike messengers, yes bike messengers, and their apparently exciting lives. We get to watch as Joseph Gordon-Levitt speeds around New York on his fixed gear bicycle, or fixie as hipsters refer to them, and yes, hipsters will love this movie for the over abundant use of that term, or maybe they won’t, whatever, as he delivers pizzas or whatever it is that bike messengers do.

It seems like a normal day at the office for JGL, zipping through traffic, delivering top-secret documents, and being an all around jerk to the nice motorists of Gotham, err, New York City, until he is given an envelope to deliver. Big shocker, right? Here’s where the twist comes; it’s not an ordinary envelope. You see, Michael Shannon really wants this envelope. I mean he really, really wants it, but because JGL is a jerk he doesn’t hand it over to the nice Sargent Friday, or was it Monday? And so the shenanigans begin.

Premium Rush is one of those movies where they pick some oddball source material and craft a generic story around it (Phone Booth, Cellular, Firewall). There’s nothing really special about the story or characters. JGL is supposedly the best bike messenger around, he was bike messengering before it cool, yet he’s always bitching about money. If you only do it because you love the adrenaline then don’t cry because your check is “a little short.” JGL, however, does play the character with a nervous sense of confidence that makes him relatable, so you find yourself rooting for him when he recklessly breaks the law multiple times. Michael Shannon plays the villain, a gross cop who apparently doesn’t care what the dress code is at work and sucks at dominoes. Who sucks at dominoes? This guy does. I honestly didn’t know you could bet on dominoes, but he finds a way and then finds a way to lose a lot of money, which is why he wants the envelope and the envelope actually has a movie ticket in it worth $50,000…um, so yeah.

JGL also has this ability to see possible future paths and their outcomes. Which is just an excuse to show off some crappy sub-par CGI that looks like it was made for some discovery channel show about bike messengers. At one point all of the paths he sees end in him crashing in some awful way, and I mean awful like unsafe, not awful CGI, so he chooses the least painful one. If only Michael Shannon had this ability he could’ve seen the flash mob coming. Oh yeah I forgot, the other bike messengers form a flash mob to thwart Michael Shannon so JGL can deliver the movie ticket. They really didn’t want that person to be late for the show. I guess the mobsters are on the flash mob call list too because they show up wanting their money from Michael Shannon. He doesn’t have it so Oddjob shows up and shoots him in the back of the head using a crossword puzzle book as silencer.

Now that the lady was able to make her show in time everyone has a laugh in the alleyway and JGL gets the girl. Now this whole celebration is going on the same alley where Michael Shannon is stumbling around with a giant whole in the back of head and no one seems to care. No one stops to say “hey, maybe we should call the police,” or “let’s get the hell out of here before the police get here.” Nope, they just stand around glad-handing each other, which I thought was kind of weird. I’m a stickler for continuity so if they had moved to a different alley, then one little scene of them wandering off before Michael Shannon gets drilled in the head would’ve been sufficient.  Then after all is said and done JGL wanders through a waterfall and finds the batcave. Oh wait…

My favorite part of this movie was Aasif Mandvi. He plays JGL’s boss and is probably the twin brother of the character he played in Spiderman 2.

While this movie was entertaining and wasn’t half bad I wouldn’t suggest you rush out to see this one, which by judging by the box office numbers I don’t suspect you will.

Warning: the above review, which is more like a wacky plot synopsis, contains spoilers for more than one movie. Hope you enjoyed.

Check out the trailer:

The Book of Henry | Movie Review