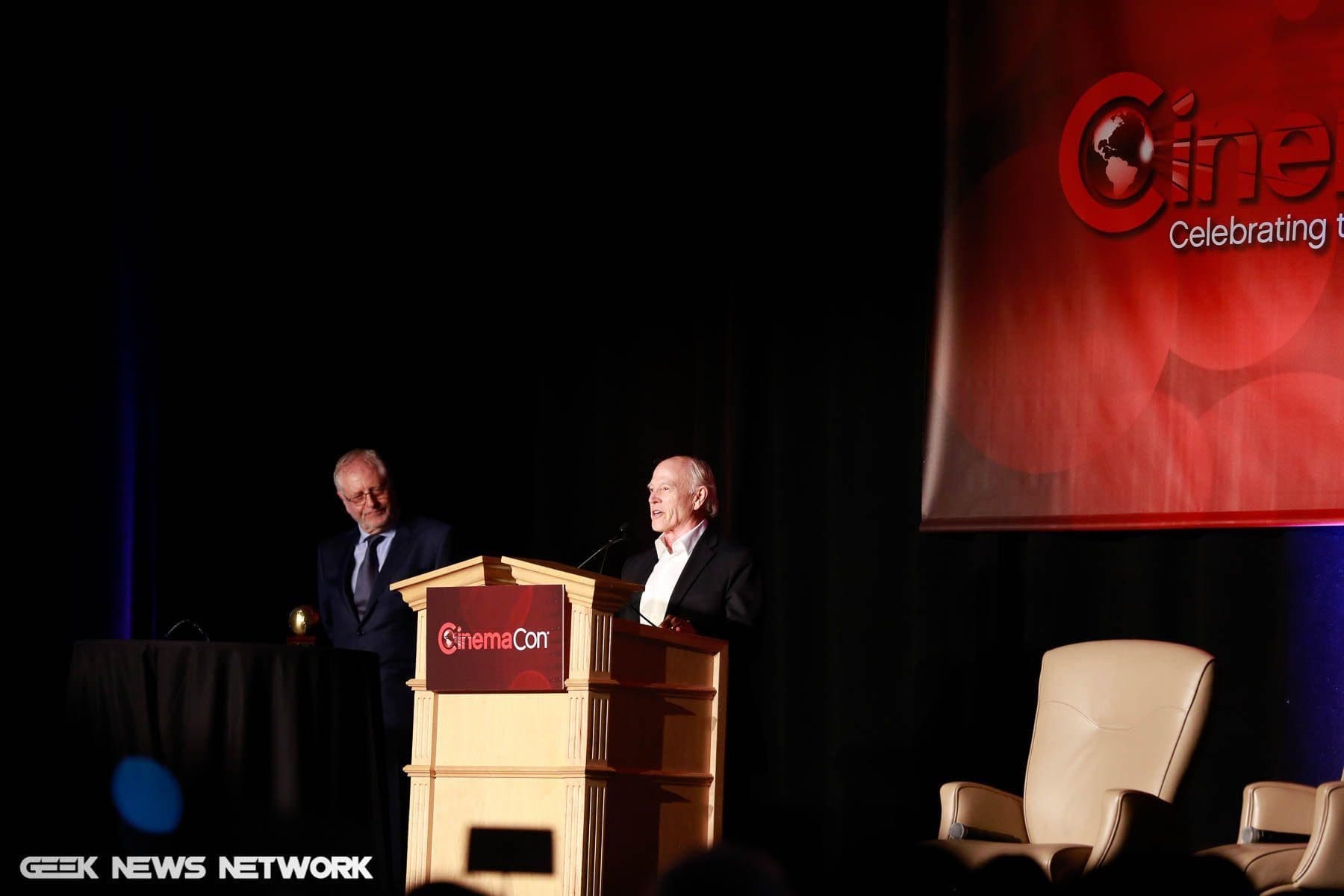 Day One of CinemaCon 2016 kicked off with International Day including an awards ceremony celebrating some of the best in the distribution and exhibition industries. The last award for the day was for the International Filmmaker of the Decade which was awarded to Frank Marshall, the legendary producer who has worked with Steven Spielberg, Clint Eastwood, M. Night Shyamalan, and Colin Trevorrow, and many more. Frank Marshall is best known for his work on the Back to the Future trilogy, Indiana Jones and the Raiders of the Lost Ark, Poltergeist, The Sixth Sense, and the Jason Bourne Franchise. He is also responsible for one of the top grossing films of 2015, Jurassic World.

After the awards ceremony Frank Marshal sat down with an interviewer from Variety to talk about the latest projects and inside scoop into what the future holds for Amblin Entertainment and for fans across the globe.

Q: Why do you think Jurassic World was so successful last year, grossing over 1.6 billion in total box office.

A: It was a fresh and new at the time, not just another superhero movie. Also, dinosaurs have always seemed to enthrall audiences and having 3 films that have built the world for us already helped audiences dive right in to this installment. It also helped to have a director (Colin Trevorrow) who is a big fan of the Jurassic Park series who brought his skills as well as his excitement for the film each day on set.

Q: Collin Trevorrow was a fairly unknown director when he signed on to Jurassic World. Who found him and how did he land this project?

A: My wife, Kathleen Kennedy, was searching for a director for Star Wars: The Force Awakens and came across his film Safety Not Guaranteed and while she felt it wasn’t right for that project, I saw the potential in his film so I got in touch with him and we went from there.

Q: As a producer is it more difficult to work with a newer director than someone more experienced such as Speilberg or Clint Eastwood?

A: It’s really all about the story telling for me and each director has their own ways of doing things but at the end of the day  it’s about constructing a good narrative. His (Trevorrow) work on Safety Not Guarantee really sold me on his story telling abilities.

Q: So is a sequel for Jurassic World in the works?

A: Well we are in the early stages of developing the next installment which is slated for release in 2018. Right now we are in the treatment process and will be moving forward into the script very soon.

Q: So your company, Amblin was  responsible for the Indiana Jones franchise. What’s in store for the future of Mr. Jones?

A: Well Indiana Jones is coming back in another installment but we are in the very early stages for it. Right now we are still in negotiations and still looking for our writer.

Q: There has been talk about the franchise doing a reboot and rumors that Chris Pratt might take on the role of Indy? Do you think that this is a franchise that can survive without Harrison Ford?

A: It’s undetermined now but we will be shifting the focus on a younger character and it’s really about the storytelling more than anything. We won’t be going the James Bond route where different actors play the same role. Indiana Jones will always be Indy.

Q: The newest Bourne installment, Jason Bourne is coming out in July. How did you approach this new sequel and how did Matt Damon come back on board?

A: Well we had used all of the original source material from Robert Ludlum’s series of novels in the first three films so really we felt like we had run out of ideas for it. But the current world events such as massive hacking like Edward Snowden and Wiki-leaks lead us to develop a story that we felt could be compelling enough to be part of the franchise. Matt Damon came on board after we got the scrip from Christopher Rouse and the chemistry of our director Peter Greengrass just made it too tempting for him to pass on.

Q: So you have a project that you are currently trying to get made but have had some issues with it since the 1970s. What is the status for Other side of the Wind?

A: Yes, this is a personal project of mine that was originally directed Orson Welles in the 1970s and I was fortunate enough to be a part of that team. Unfortunately due to the circumstances the film was never produced and much of the original film reel has been sitting on shelf all this time. Now we’d like to take that footage and complete the film and release it and we are currently running an Indiegogo campaign for it. The film itself centers around the last night of a film director’s life as seen through the eyes of his party guests and the paparazzi. It’s a really interesting project that I hope can finally be completed after all these years.

Q: Last question, you have worked with a wide range of directors throughout the span of your career. What it is like to work with so many different directing styles?

A: The best way to make a film is planning and pre-production. There are so many younger directors that try to shoot from the hip but it’s not the right way to go. Planning out the film is most important. In the film industry we have to be cautious but also experiment and adapt with new technologies and innovations.

CINEMACON returns to Las Vegas for its 5th annual convention

Top 11 Evidence that SDCC has Jumped the Sharknado